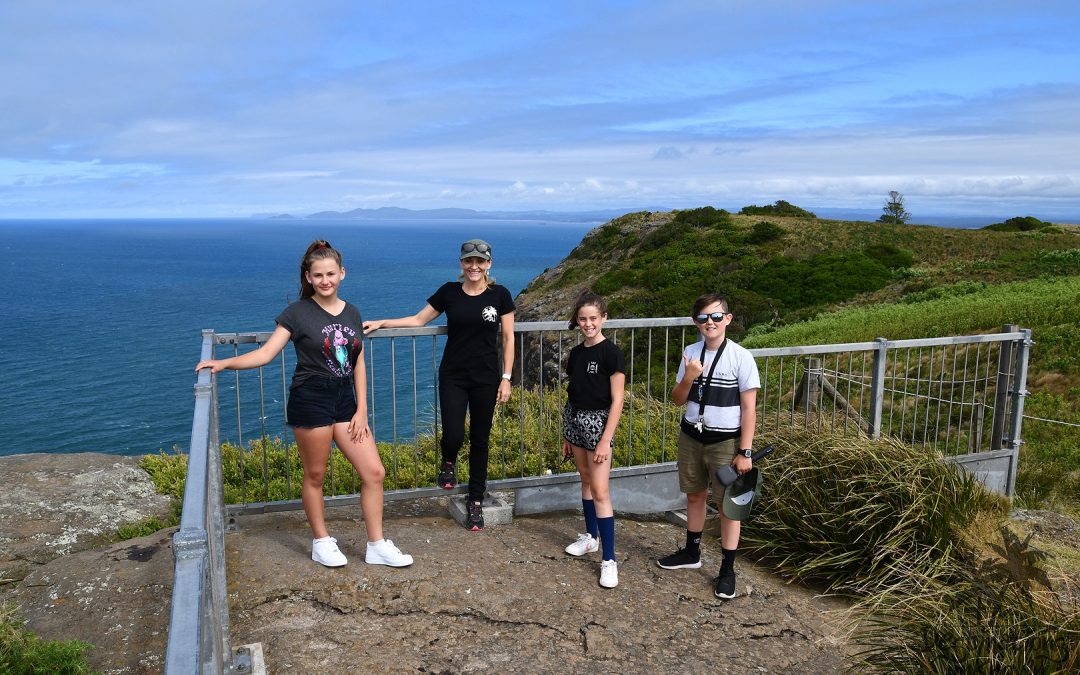 Driving along the windy coastal road through the misty rain we see The Nut through the low-lying clouds and it’s time to pull over, brave the wind, rain and the oncoming traffic (all 3 cars) to get ‘that’ shot. ‘That’ shot is meant to be a jump shot – but it was an epic fail – so we had to settle for this one. Lol. 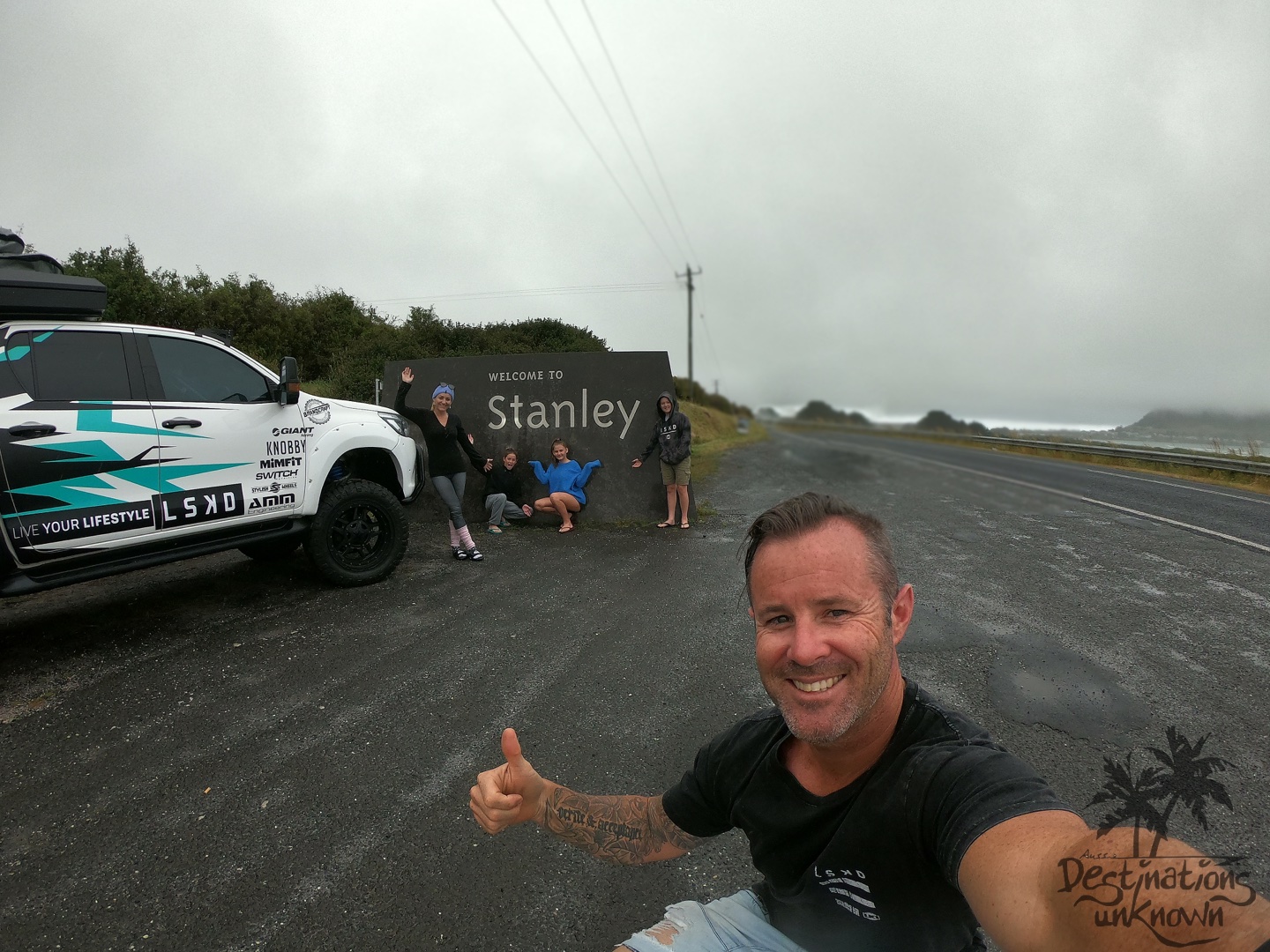 Stanley is a cosy coastal town, nestled at the base of The Nut on a thin piece of land that sticks out into the Bass Strait on Tasmania’s North West Coast. It is about a 1-hr drive west of Burnie and is well known for fishing and tourism. But one thing it is really well known for is The Nut; an enormous flat topped, volcanic neck jutting 150 metres straight up from the water’s edge. 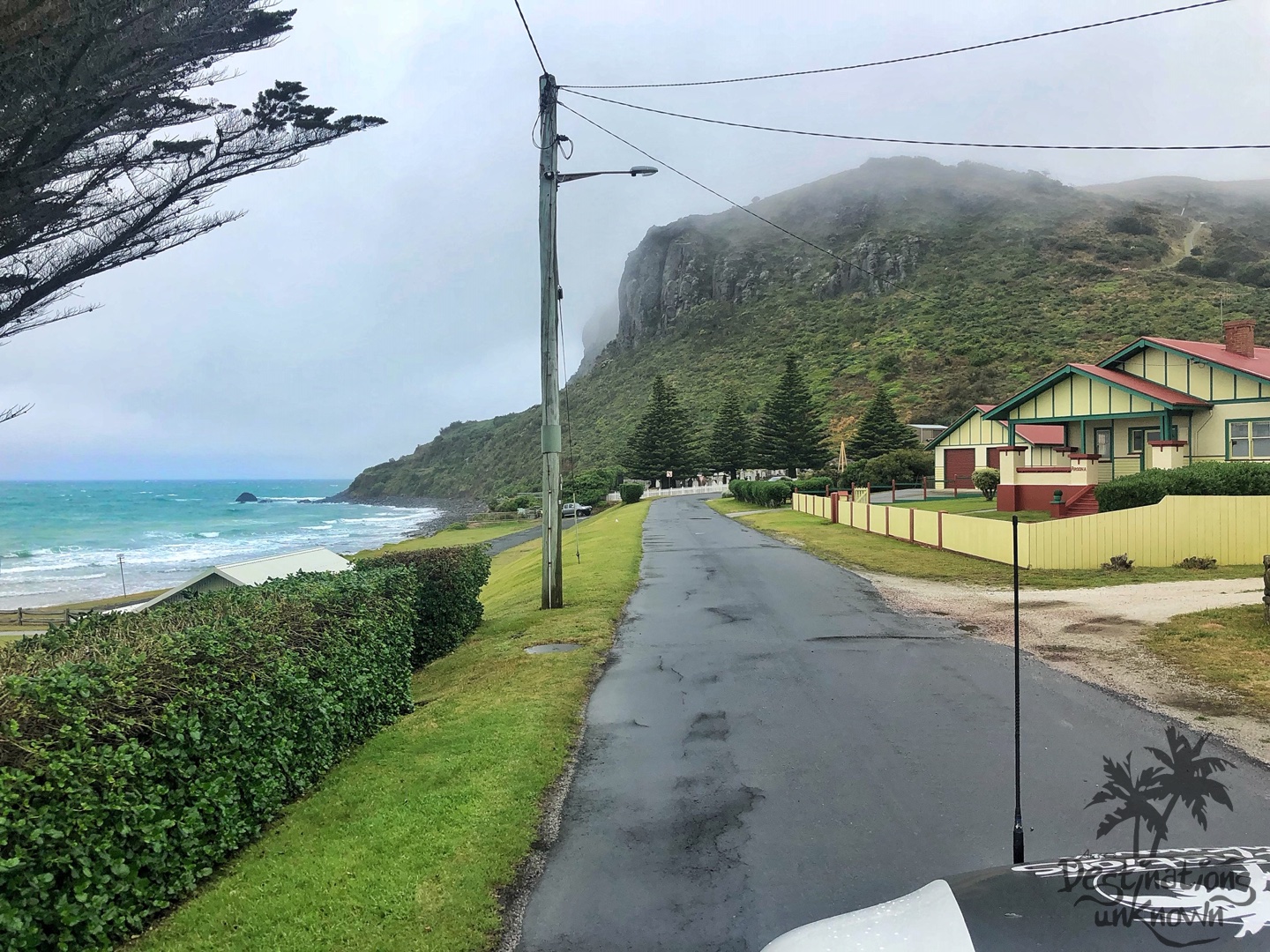 We have come here on day 2 of our Tasmanian holiday, having spent day one at Boat Harbour Beach.

Through the tiny streets of Stanley, past the perfectly preserved colonial buildings, quaint B&Bs and funky little shops we go, making our round the base of The Nut to have a quick look at the wharf where all the cattle trucks were loaded onto a barge (most likely heading to King Island) as we head to the Stanley Cabin Park on Wharf Road. 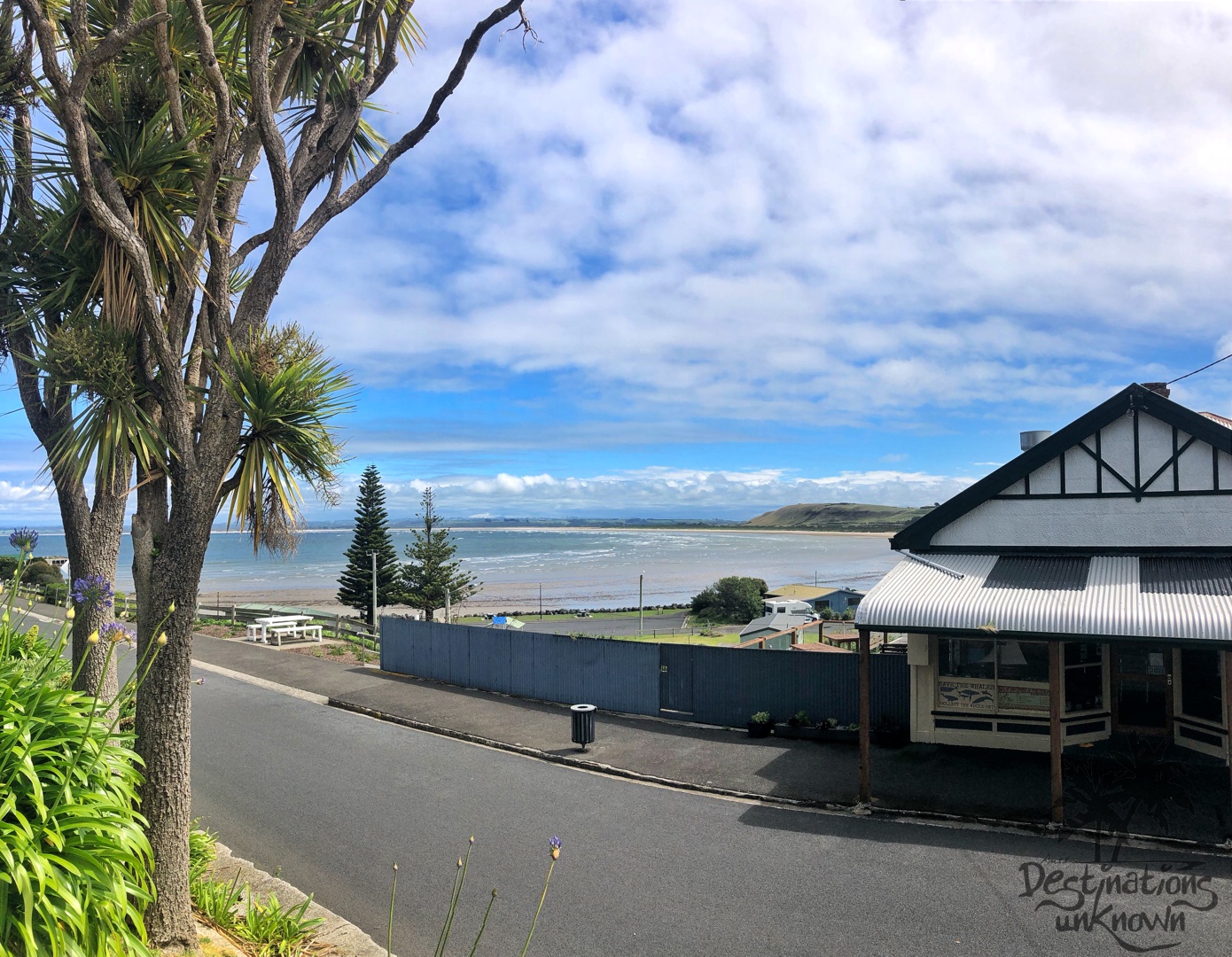 We walk in and have a chat to the lovely lady at reception who advises us that we certainly are booked in, but not until tomorrow and for 2 nights, not 3. Whoops! Lucky for us there aren’t many people here and we amend our booking and drive into our spot. There aren’t any slab sites in this park, so it’s a pretty wet set up and the awning is the first thing to go up giving us a little shelter from the weather while we shuffle things from the car inside the van.

We’d previously requested a beach front site but I made the executive decision to find the most sheltered spot and snag that! The weather is a far cry from the sunny 27 it was yesterday when we were at Boat Harbour Beach in our swimmers – it’s 16 degrees, raining and the wind gusts are pretty impressive!

Poor Chris spent ages outside trying to repair a broken latch on one of the caravan boot doors. He ended up with a temporary fix, quite a few phone calls and having parts express posted to my parents’ place so my dad can help him replace a hinge when we get there a couple of days before Christmas. 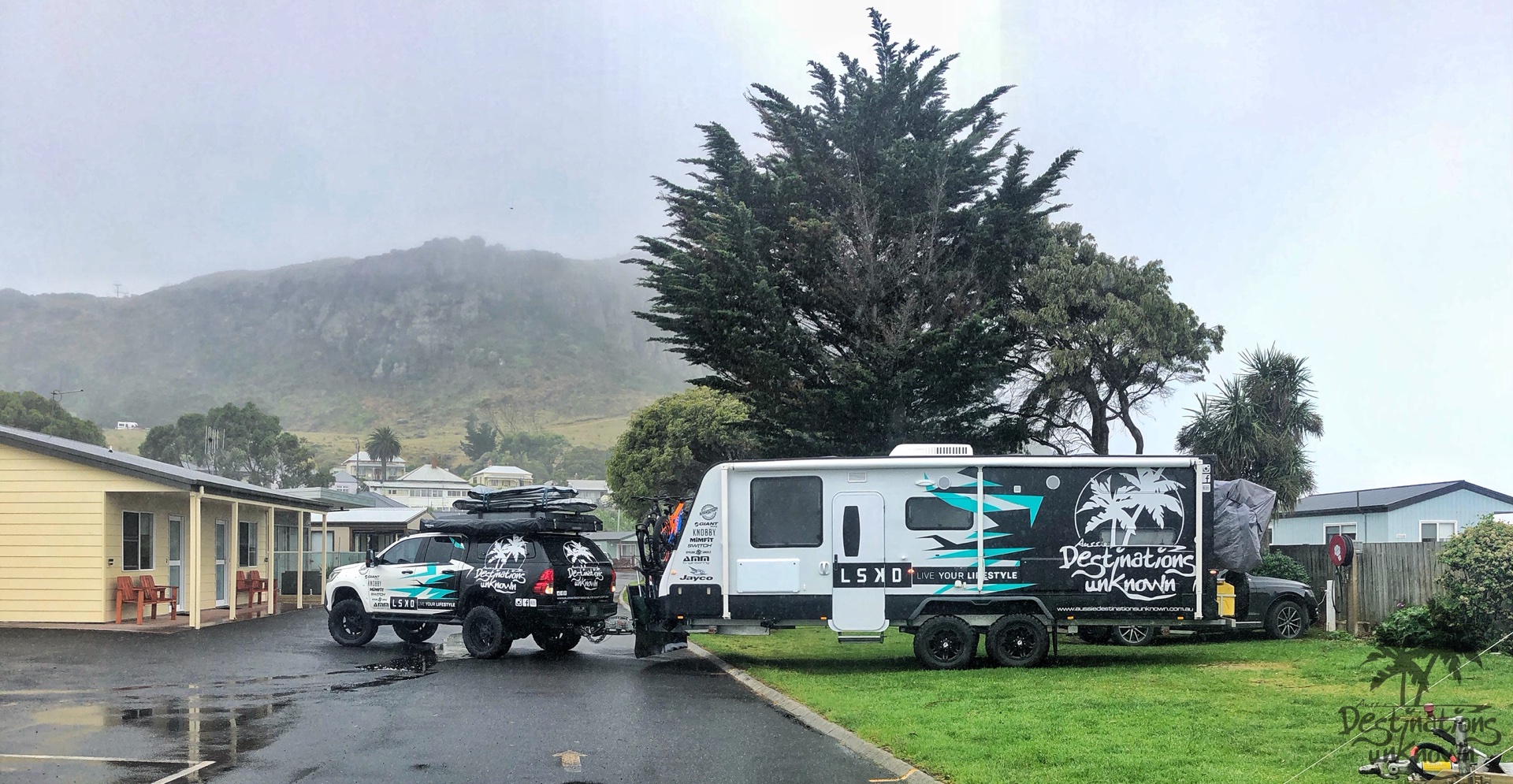 I had lunch ready and the kids had already eaten and cleared space at the table for us by the time he came inside. We ate lunch, Chris had a snooze, the kids played games and I did some writing and editing. An hour after I’d started, the kids came in and asked if I wanted to go for a bike ride with them. I did – but I had work to do. They had a great time and met a gorgeous Frenchie named Winston who’s breathing sounded like a growl. The kids were in love with him! 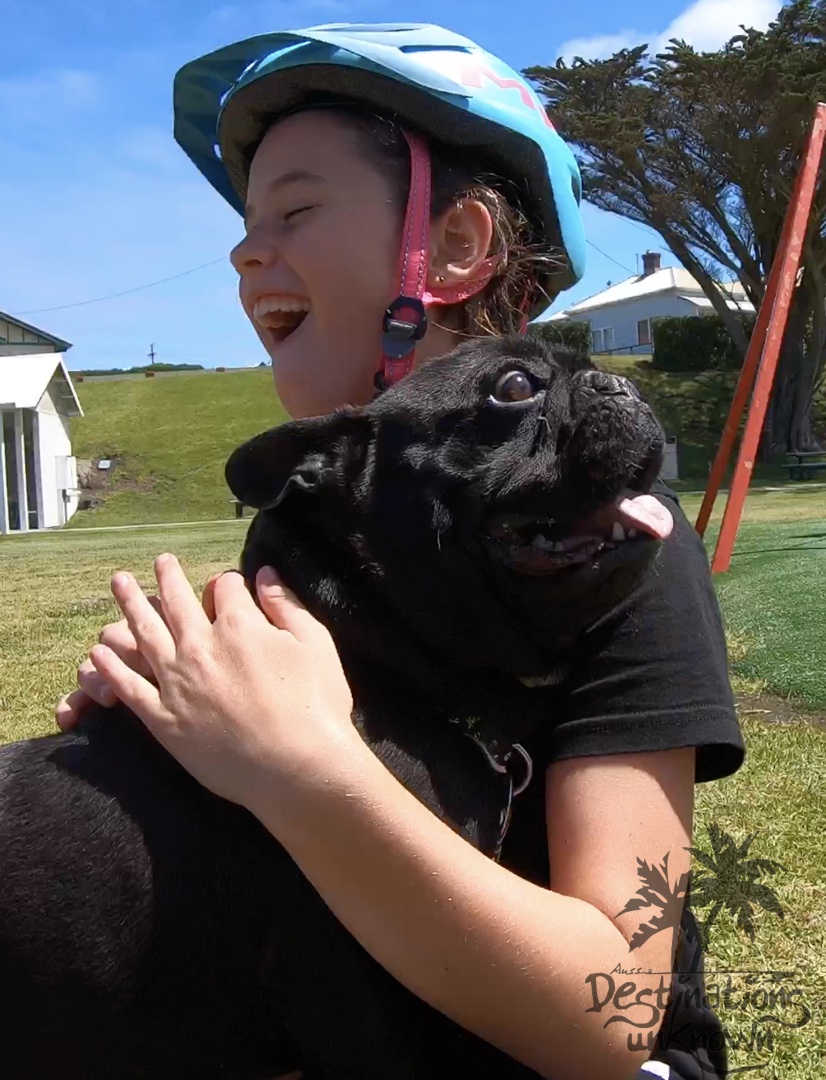 About an hour after that, they returned and asked if we should climb The Nut while the weather was good. I looked outside and the weather had cleared, the sky was a bright blue and The Nut was looming over the town looking very inviting. So, I packed the laptop up and we headed off to see what this little town is famous for.

We all really wanted to know how The Nut got its name, so I asked google who led me to this website: https://www.stanley.com.au/about-the-region/faq/ which gave us this answer:

Some say it is a shortened version of the Aboriginal name for it which was Moo-Nut-Re-Ker. Some also say the name came from when the breakwater was built in 1892. The side of the Nut was packed with explosives to construct the breakwater, once detonated nothing happened and no rocks fell from the side of the Nut.

Apparently most of the crowd that gathered to watch the event, agreed that is was a “Hard Nut to Crack”. 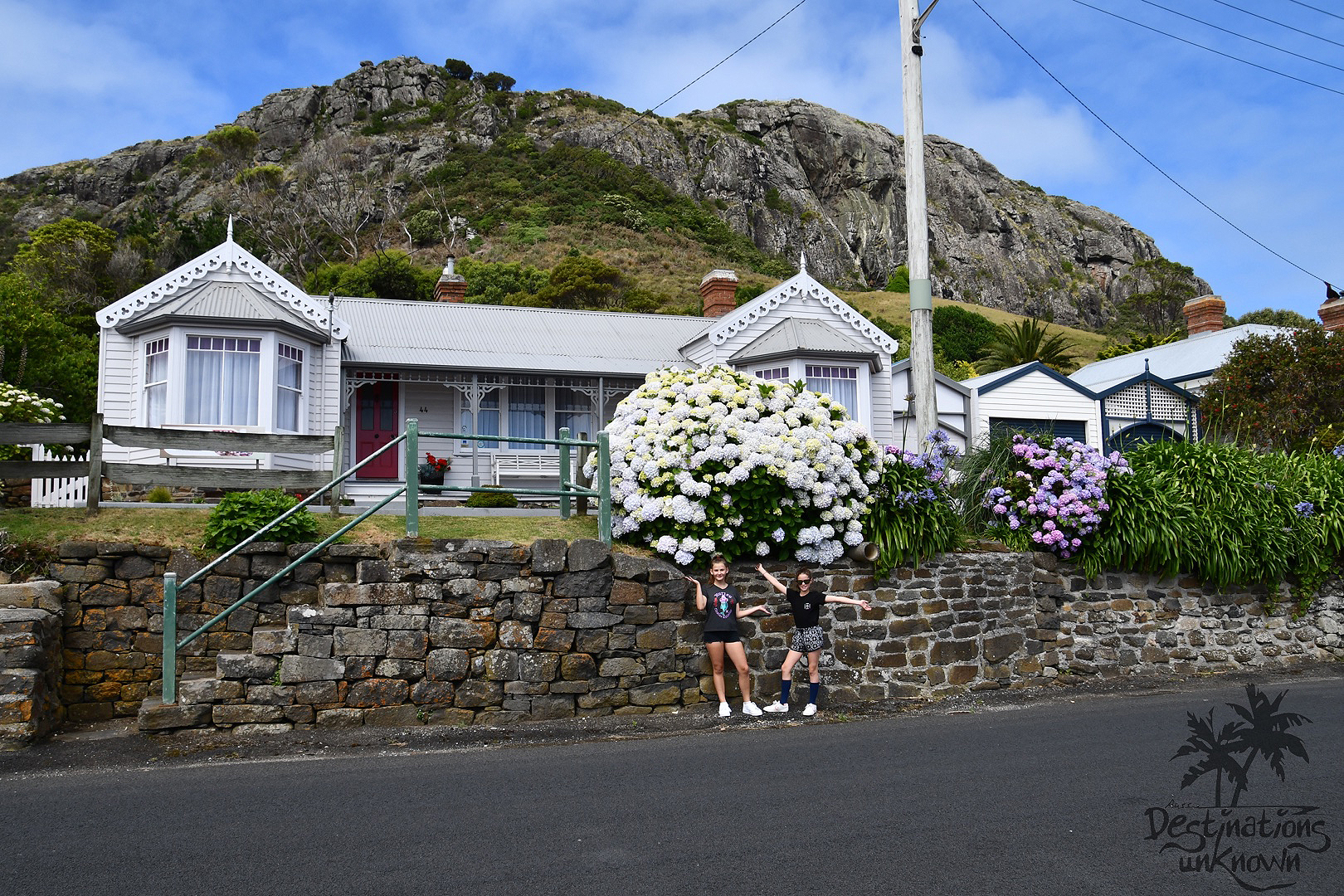 The simple 5 minute walk from the caravan park across the road presented numerous photo opportunities from old fences to beautiful gardens and houses filled with character all set with The Nut towering behind or the shimmering ocean as the backdrop.

It seemed like the cameras were clicking away every few seconds! 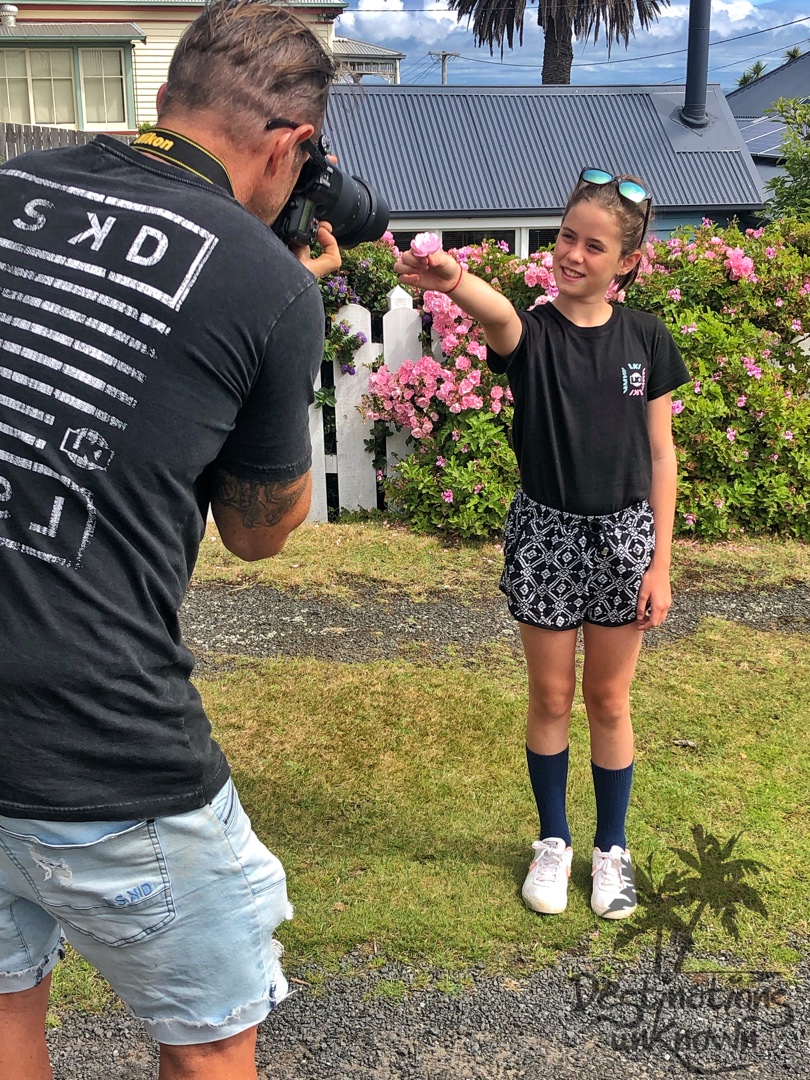 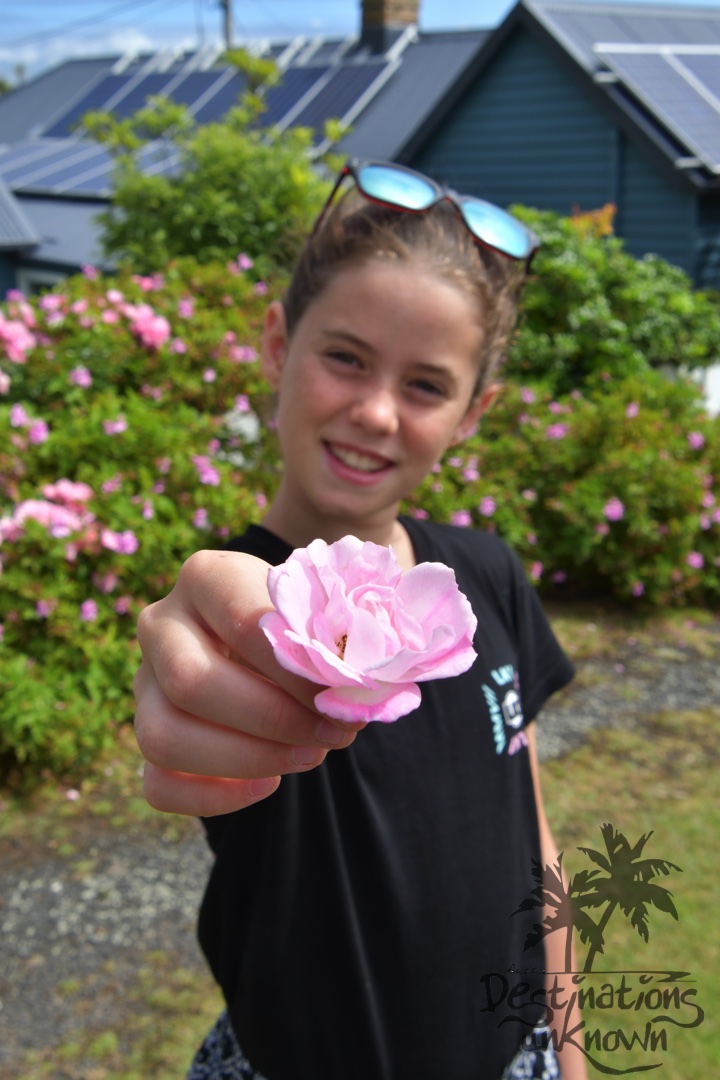 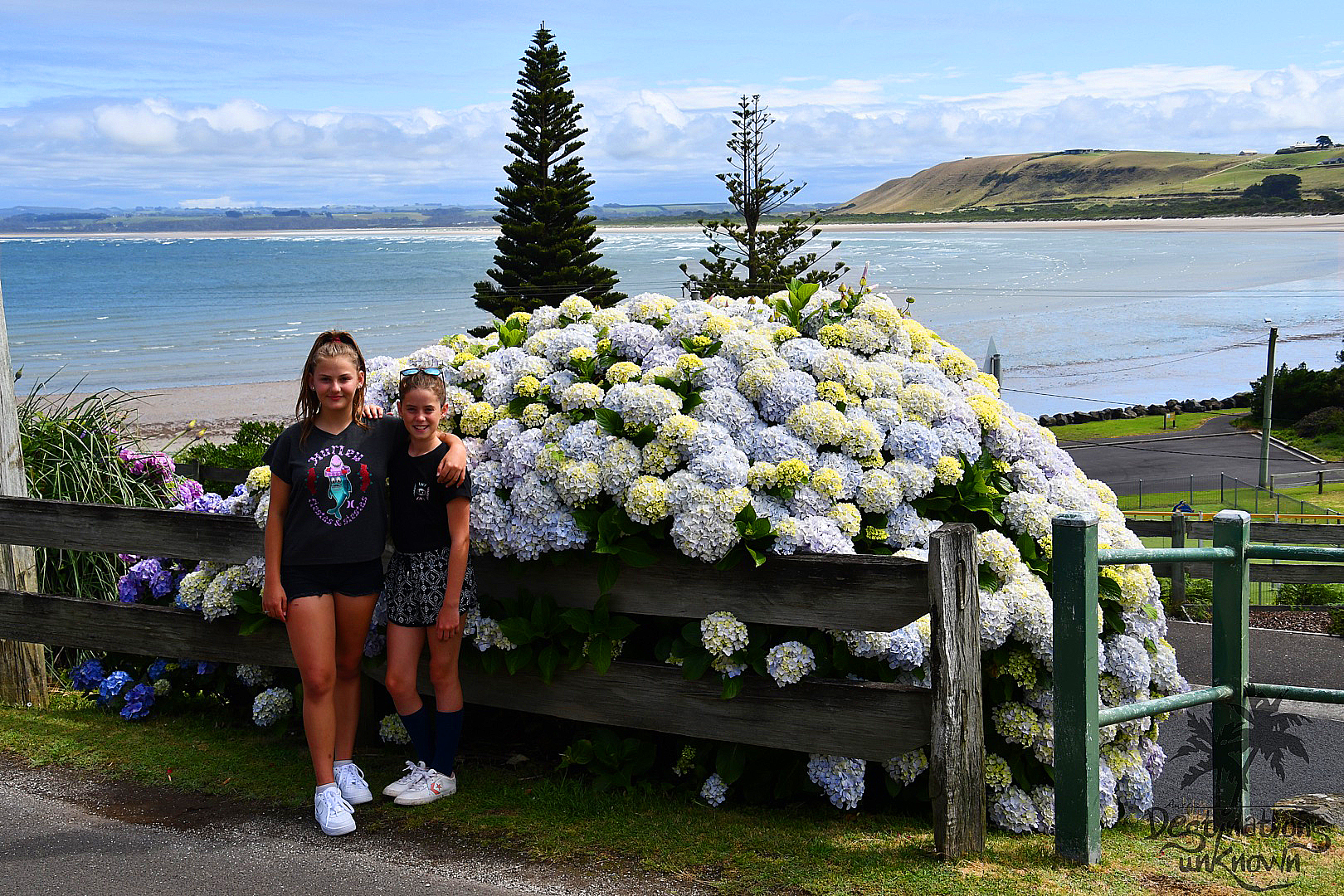 We stopped and had a chat with a local lady who was out walking her sausage dog. She was quite happy to share all sorts of information about the local area from empty houses to dog poo bags! We love meeting new people 🙂

We all voted, and the kids chose to walk up and take the open chairlift back down. I mean everyone knows that walking down a hill is harder than climbing up it, right? We arrived at the chairlift at 3:55 and read the sign that stated very clearly it closed at 4:15.

We purchased a one-way family ticket to ride up (2 adults and 3 kids) for $38 and stood in line behind the one family that was already there. We took 3 chairs up; the boys in one, the girls in another and me coming up last. 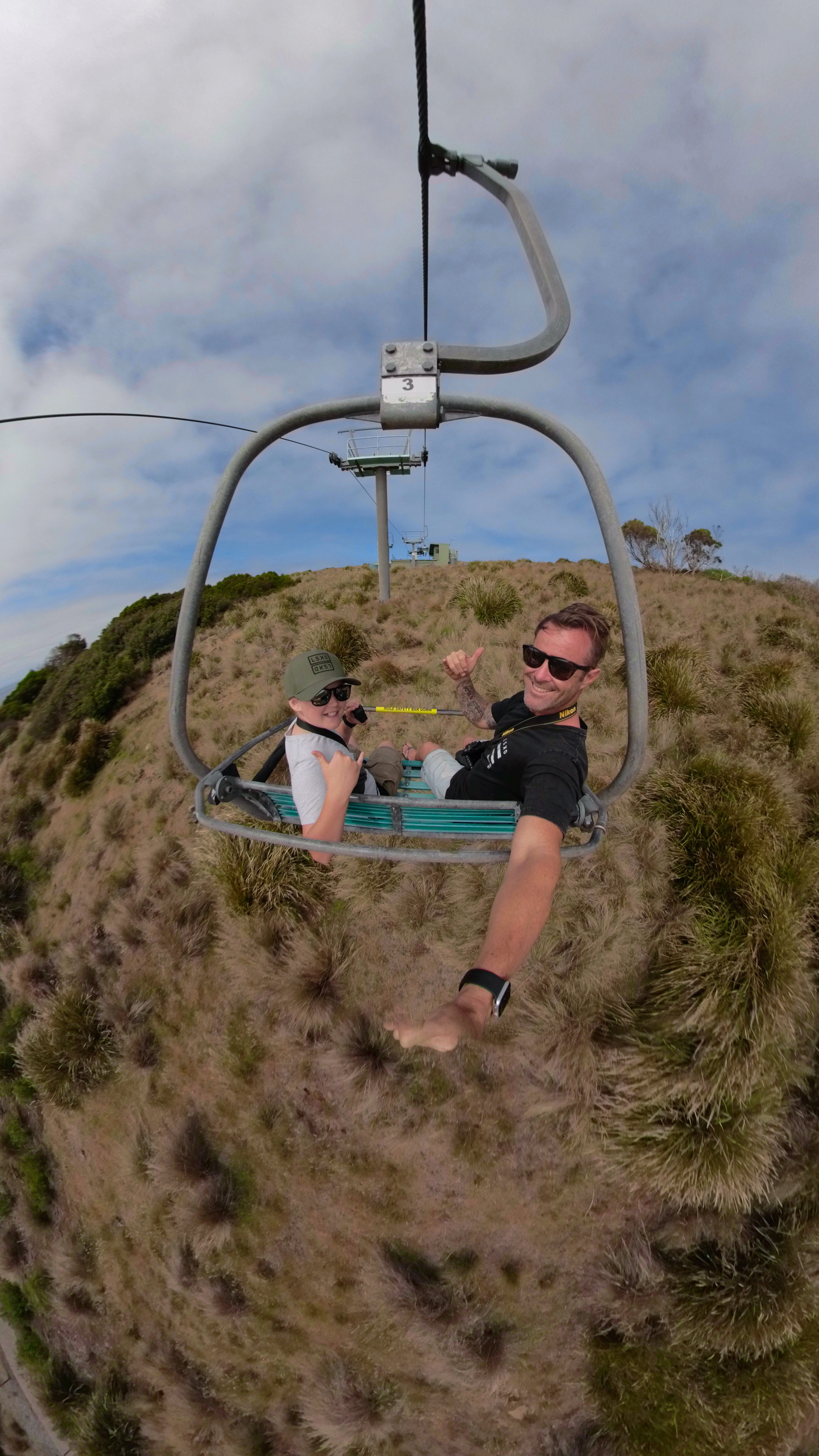 It takes about 5 minutes from base to ‘summit’ which is plenty long enough to admire the view (which is behind you). I saw a wallaby bouncing around below me and I’ve heard you can often spot sea lions and penguins if you’re lucky. 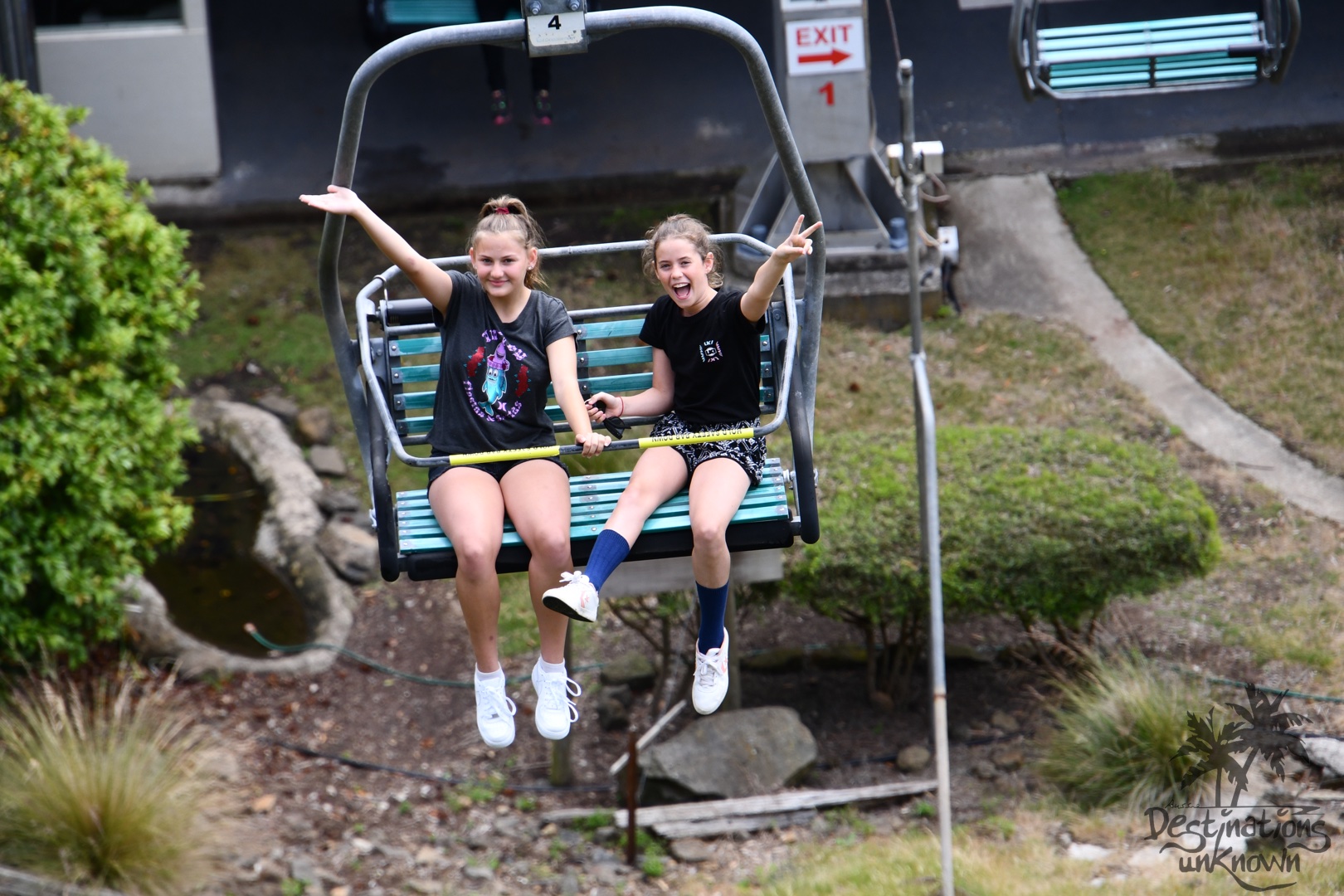 Before long we were wandering around taking in the spectacular 360-degree view from the top. At 150 meters above the sea, you can appreciate the beauty of Tasmania’s breathtaking and rugged northwest coastline. 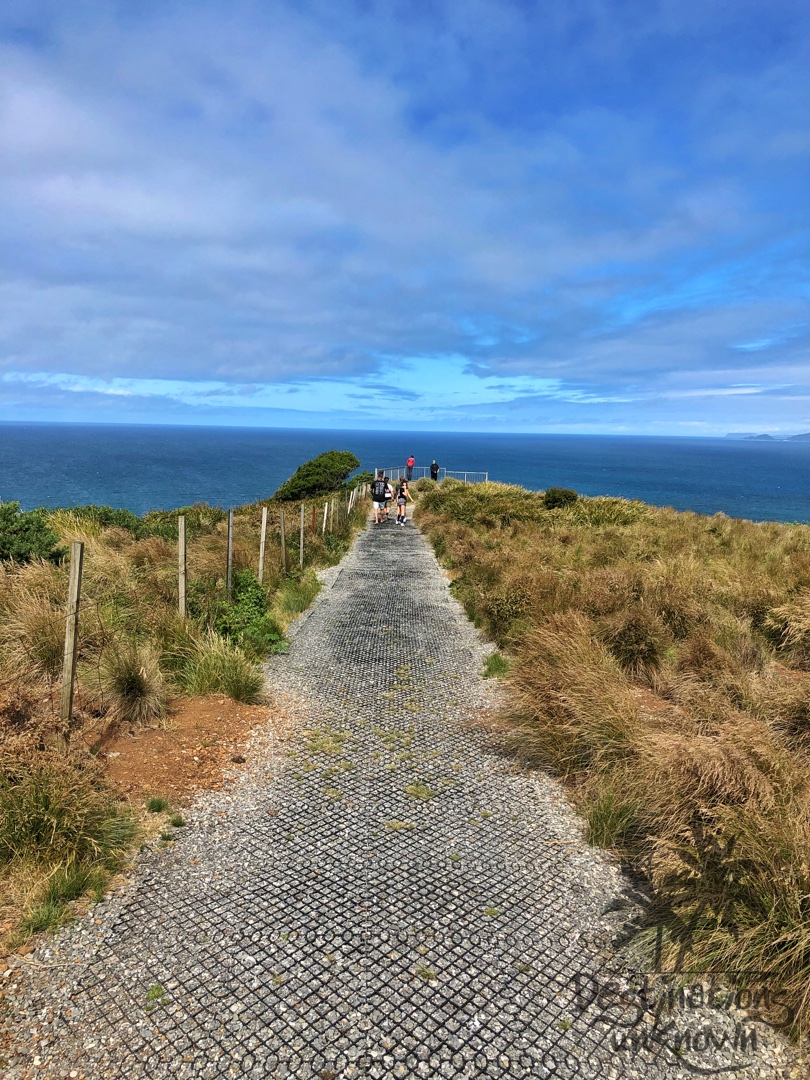 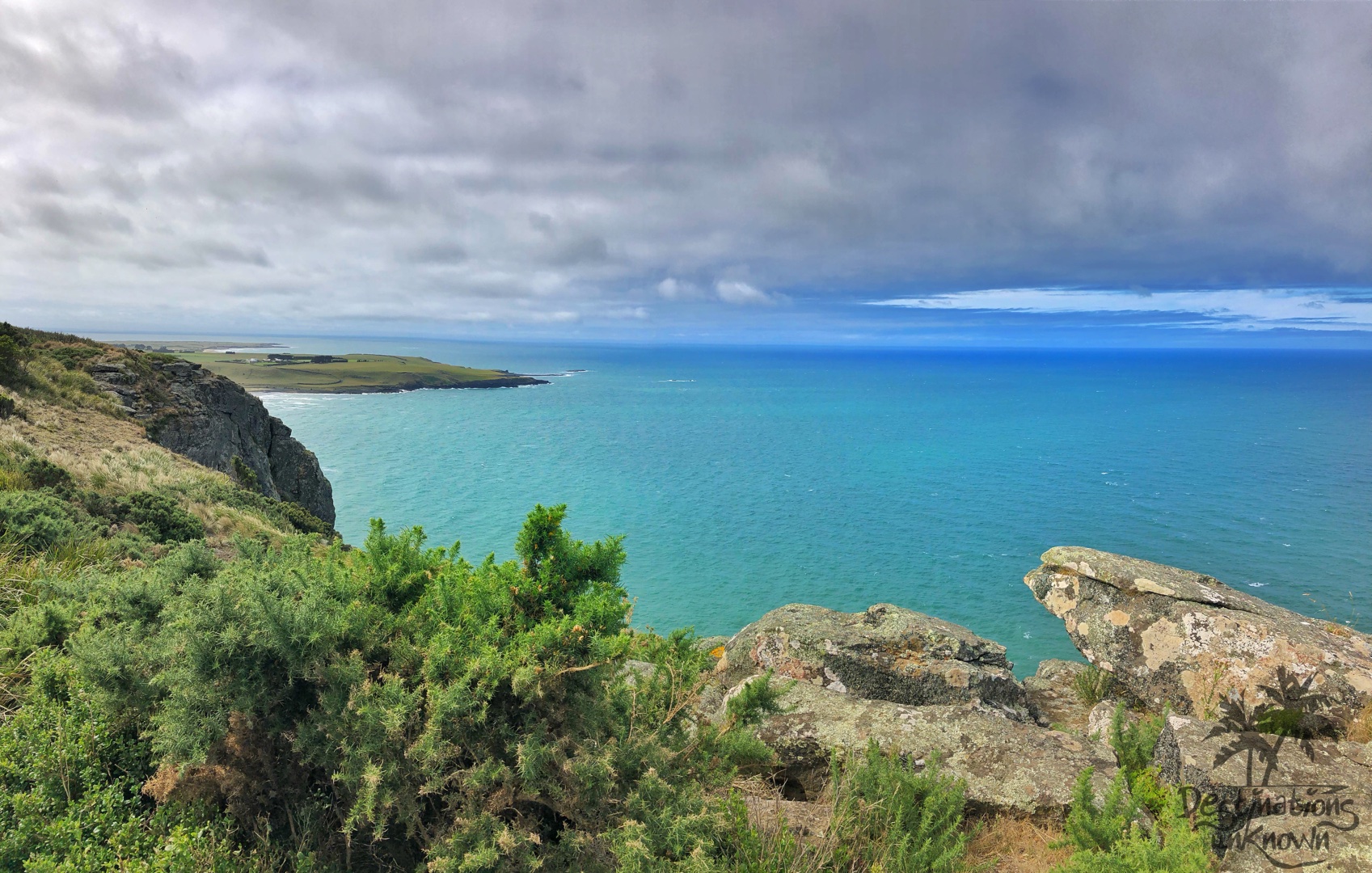 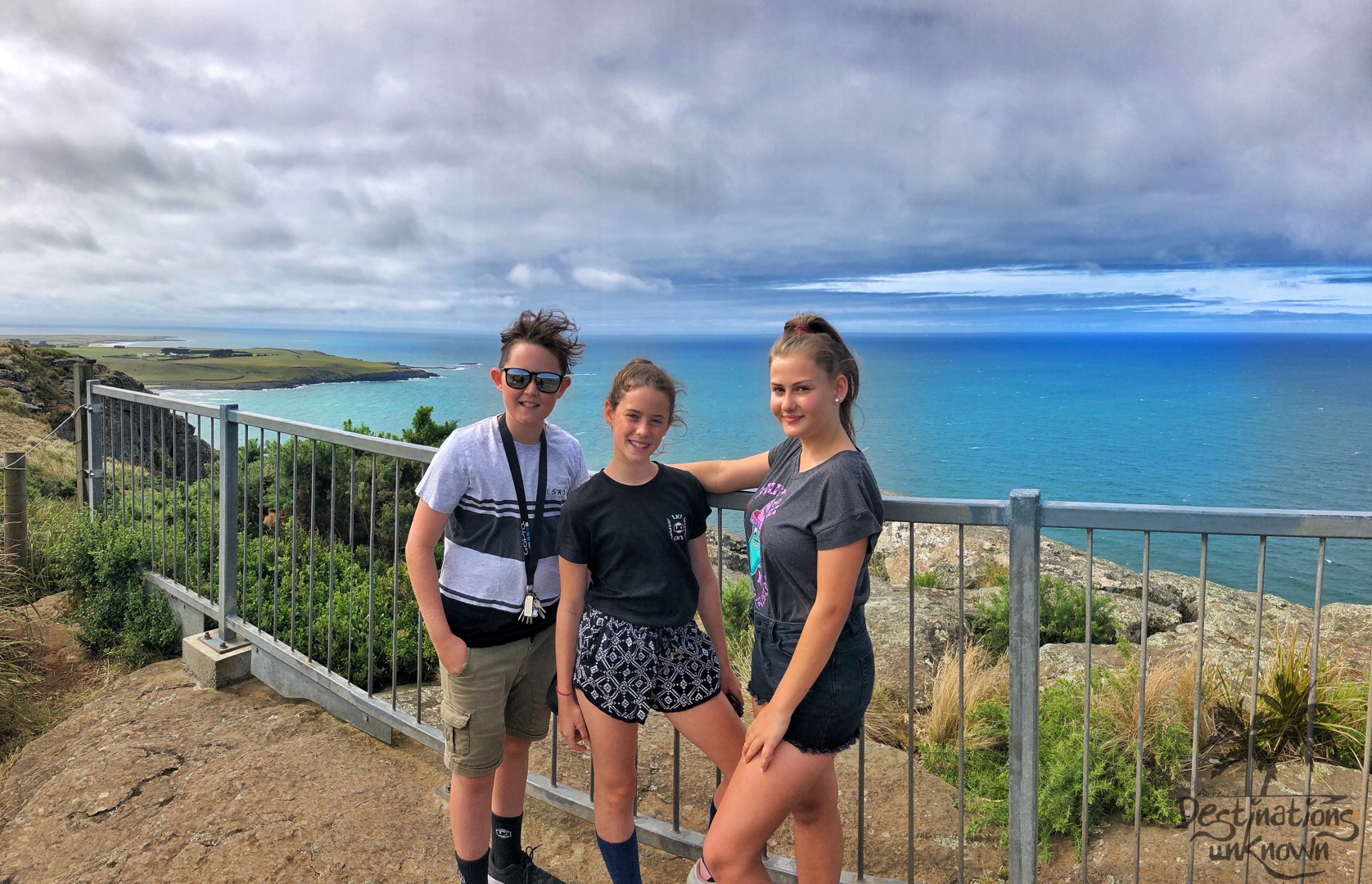 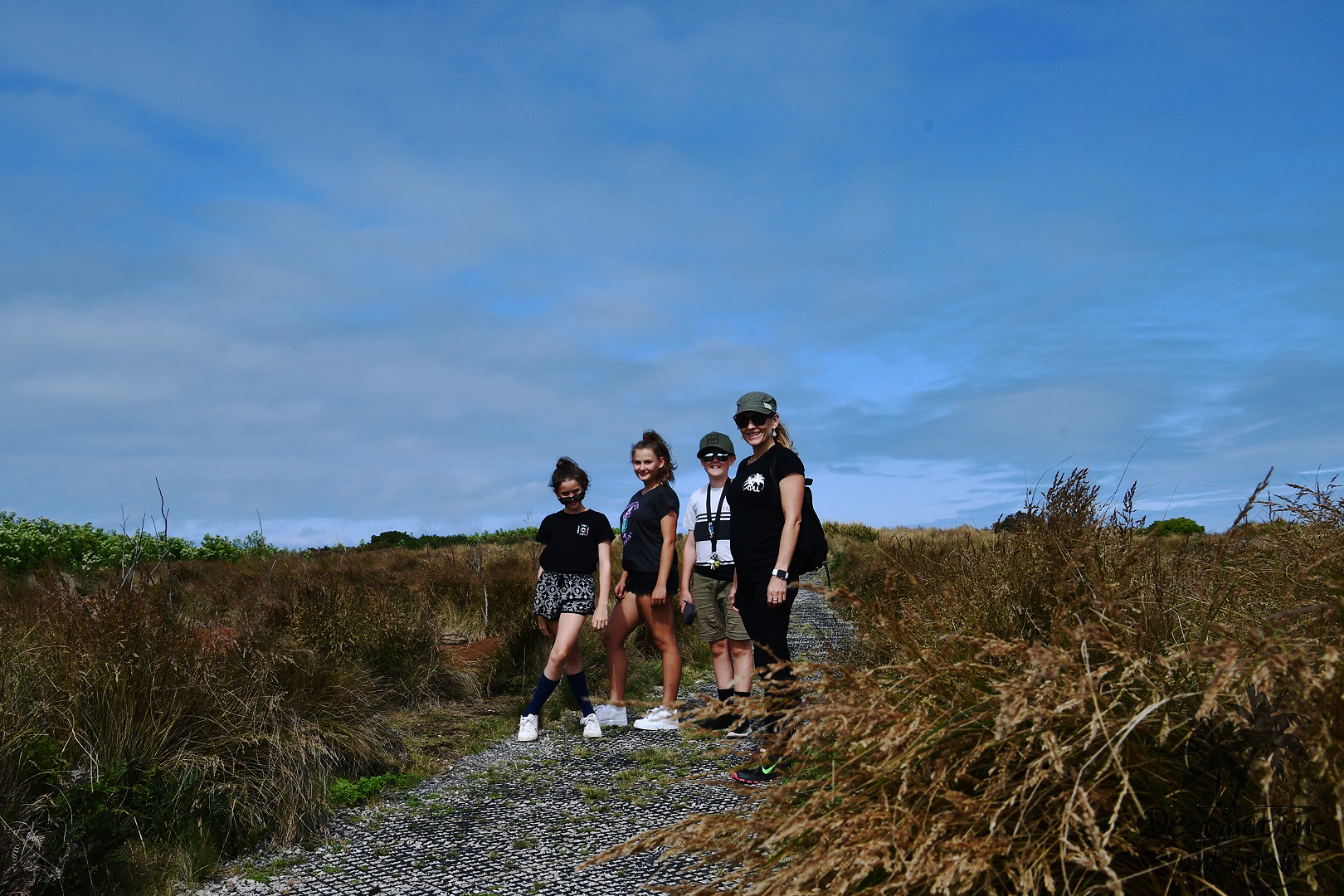 All the kids had a great time letting their crazy imaginations run wild. Not far into the walk we could smell rice, so the kids decided they must be rice shrubs. There were giant holes in the ground everywhere which obviously meant there were still early Tasmanian’s living here digging for food. And the tree with the branches that created a tiny shelter has been added to their list of places to remember ‘if they ever get lost in Tasmania’. There was mention of Wolfe Creek as they played out scenarios of being stranded in the Tasmanian wilderness on their own. 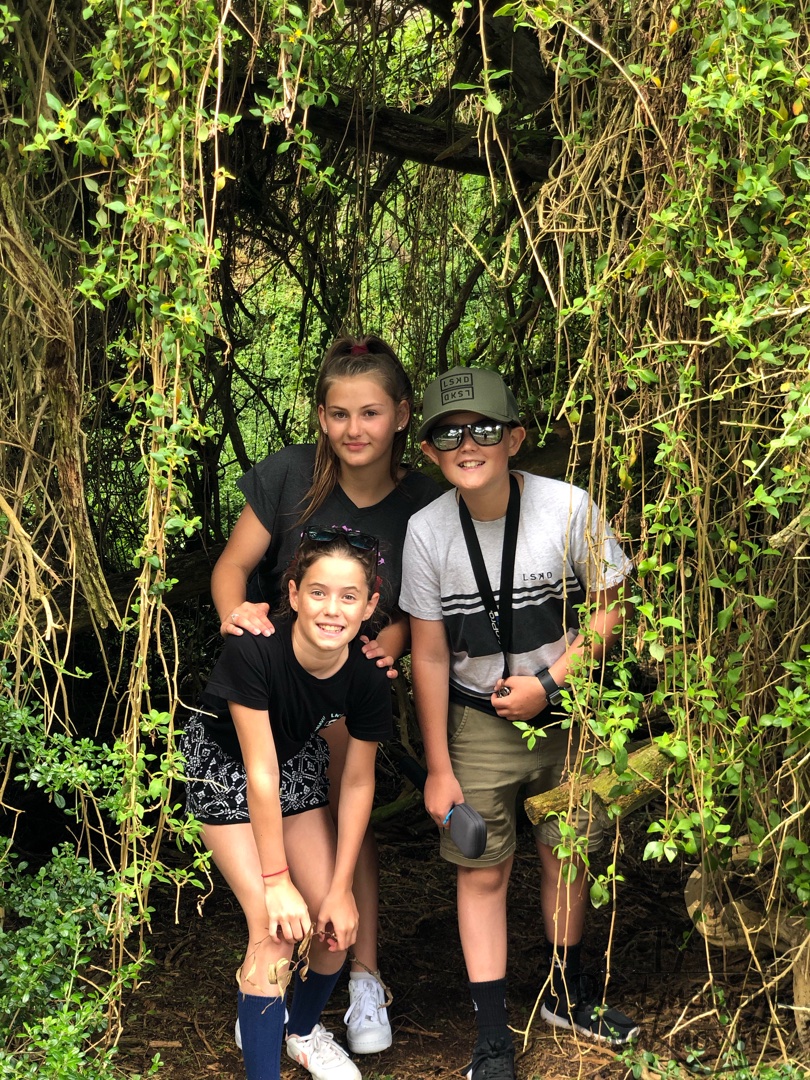 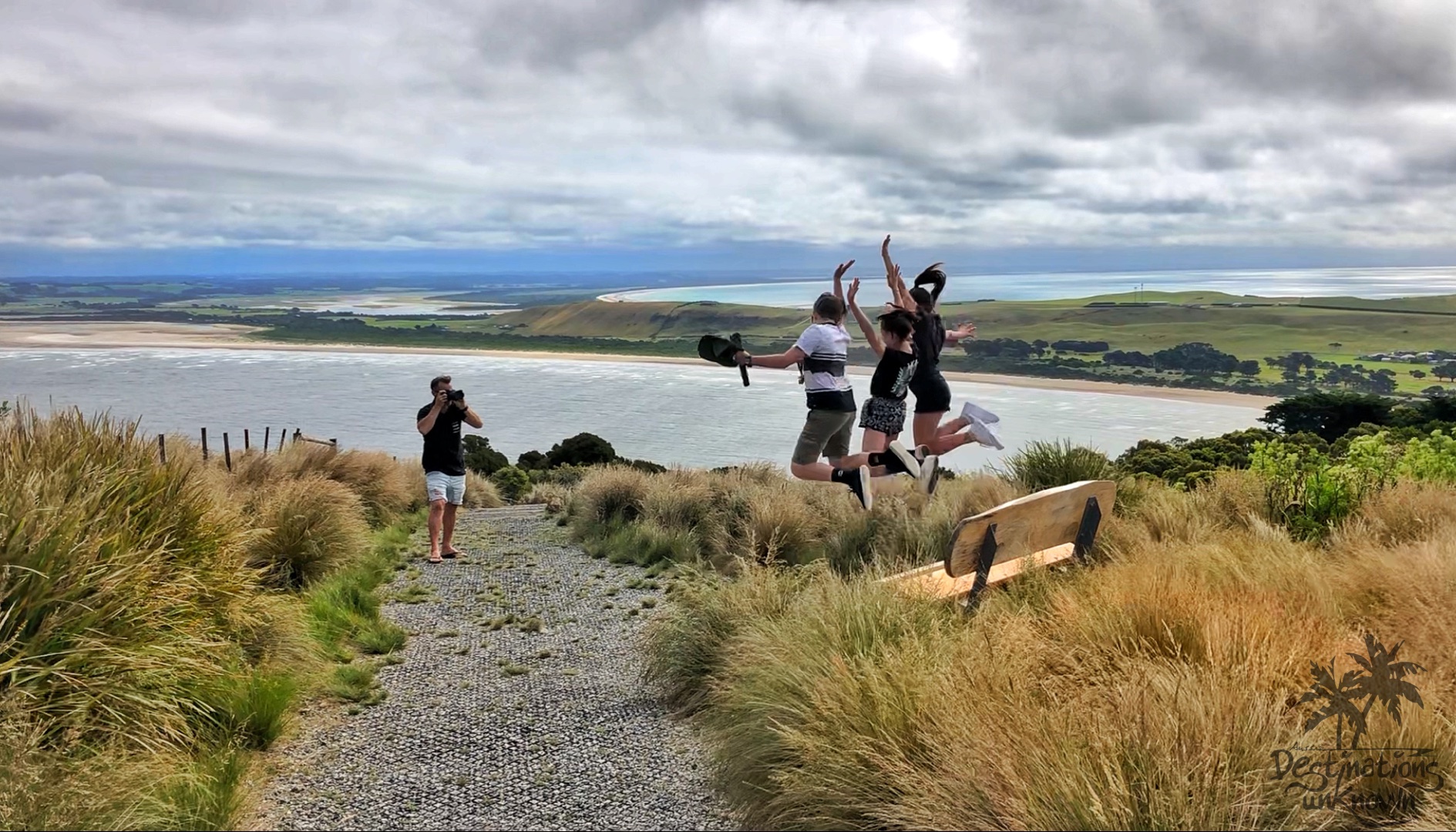 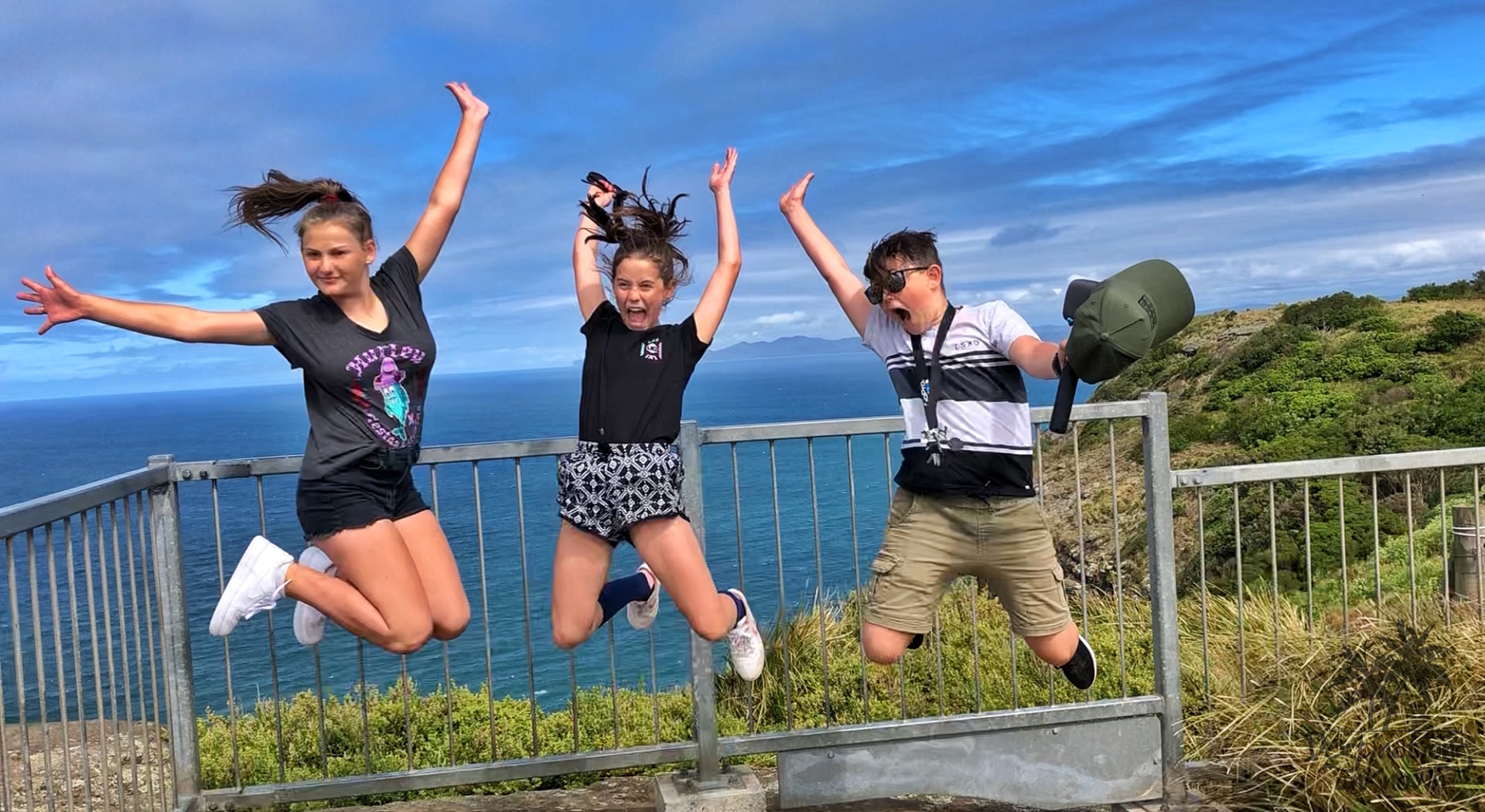 It had been blue skies and sun when we set off, but by the time we headed back down, the skies were once again grey, and it had cooled right down.

We made our way down the path, each in our own way. Aylah took the lead and ran most of the way down, Cooper hung onto the fence and went down backwards, I took small fast steps in the middle of the path in my hiking boots, Chris did all sorts of things in his thongs and Charli took her time in her new Nike Air Force 1’s. One way or another, we made it safely to the bottom with all limbs intact. 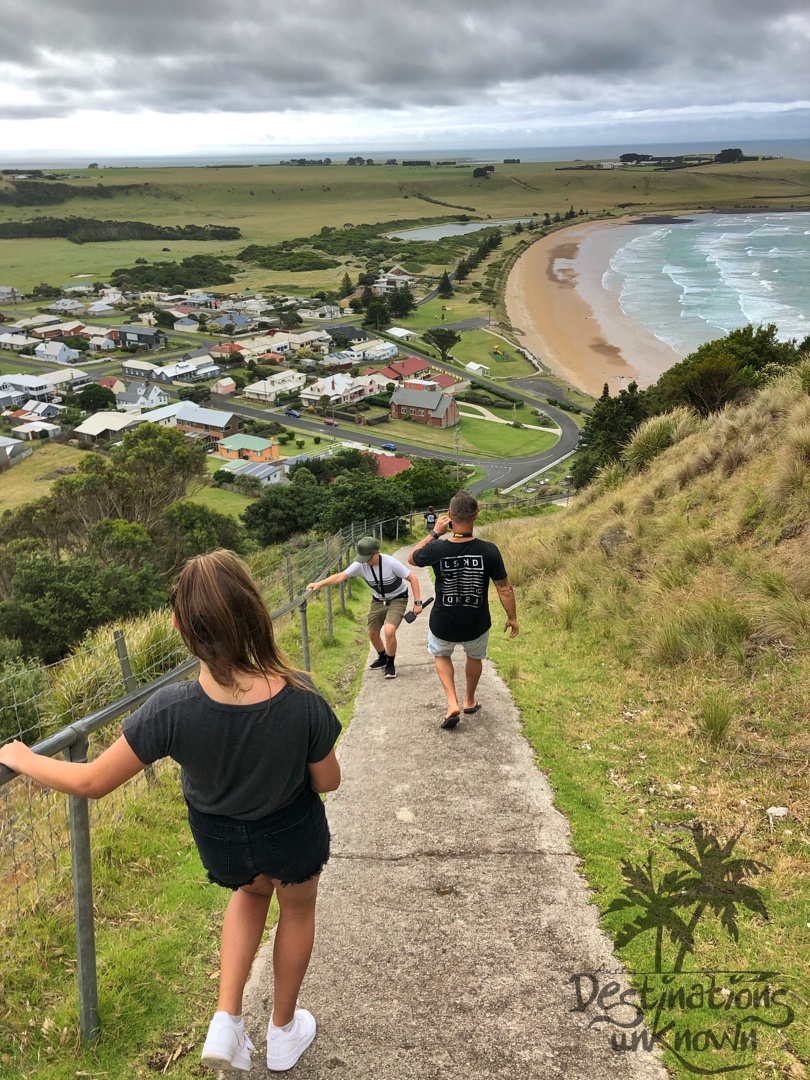 The Nut is just one of the incredible places to visit here on the North West Coast of Tasmania, and we’ve loved every second.

We are headed to the Highfield Historic House next, and the kids are unbelievably excited about that. I mean, what kid doesn’t want to explore old abandoned buildings and conjure up super scary ghost stories in their mind? I know ours sure do! 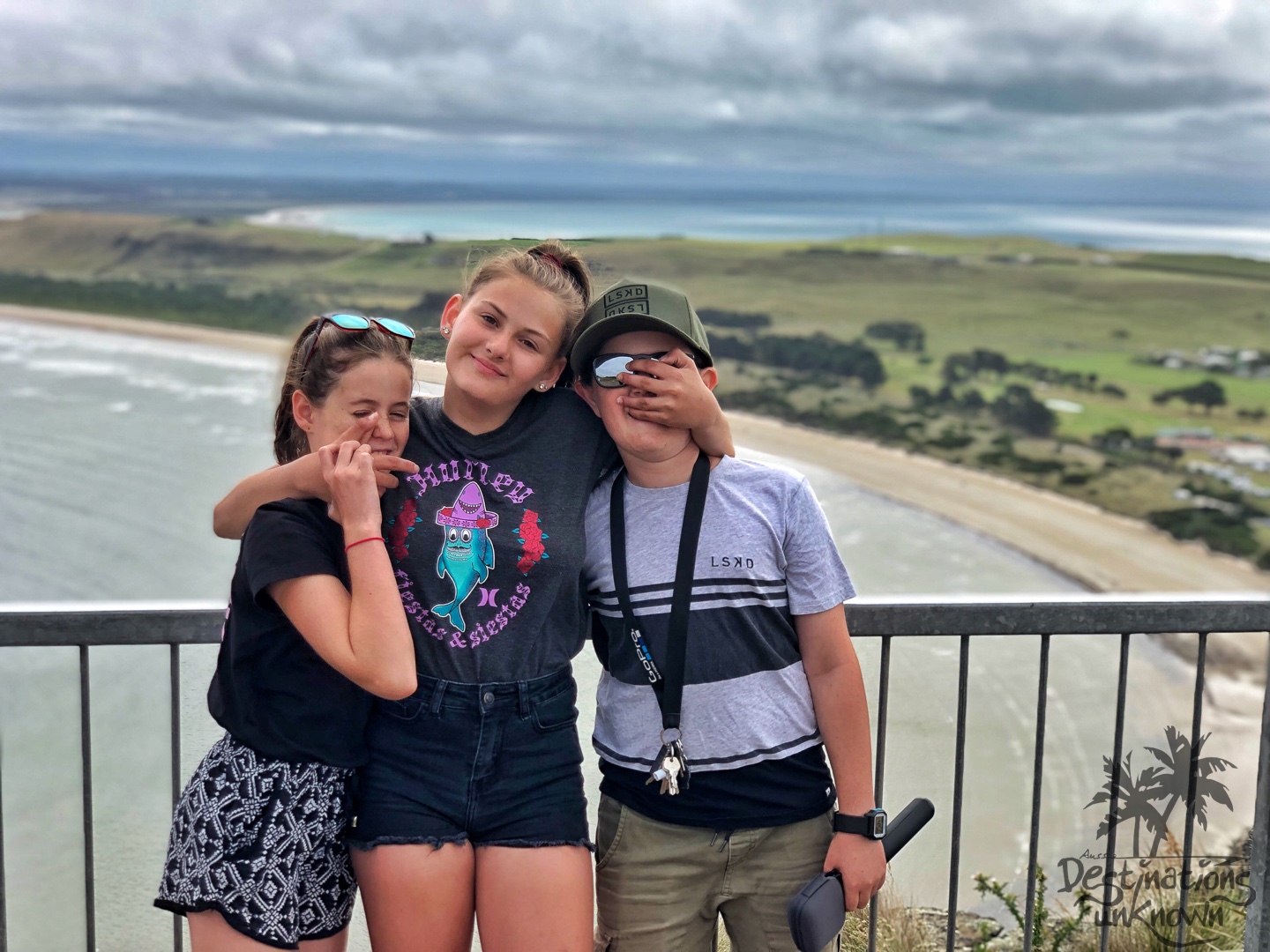