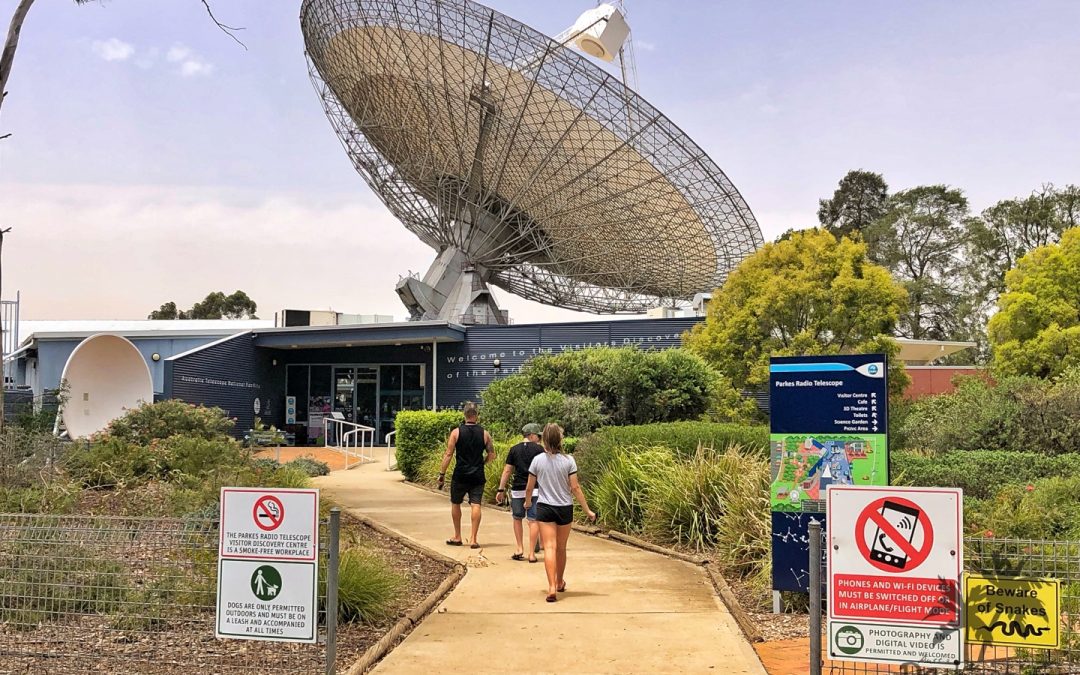 Our kids love learning, especially when it’s hands on. And for Cooper, anything ‘sciency’ is right up there on the list.

So when we were planning our trip from Brisbane to Tassie and back, and the Paul Wild Observatory (home to CSIRO’s Australia Telescope Centre) popped up on our radar, we knew it was going on our itinerary. When we kept looking and found that ‘The Dish’ at Parkes was not much further down the road, the deal was sealed.

We left Brisbane at about 4:15am and headed straight down to Narrabri. A quick set up and lunch when we got there gave us enough time to jump back in the car and find where we were going – 25 kilometres west on a fully sealed road.

Just the name ‘The Australia Telescope Compact Array (ATCA), at the Narrabri Observatory’ had the kids excited and peering out the windows as we got closer. 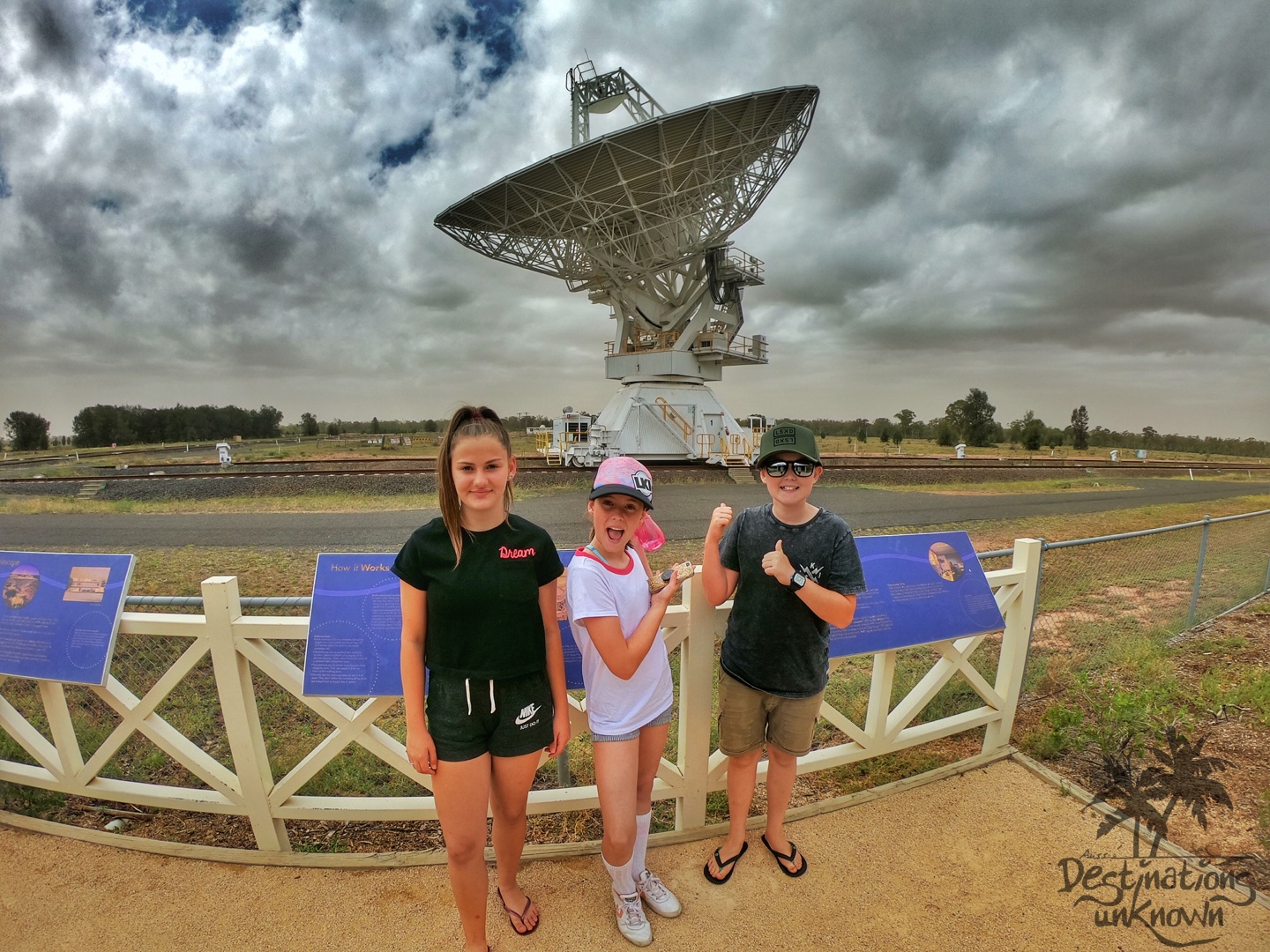 There were dishes scattered around all over the dry woodland along with quite a few signs asking you to switch your phones off or to airplane/flight mode, and turn off other WiFi and Bluetooth-enabled devices before you enter the facility.

Apparently ‘the ‘noise’ created by our modern gadgets can overwhelm the weak signals from space our telescopes are trying to detect.’

When we first got there we were a little disappointed as it appeared to be closed. It said quite clearly on the website that it was open every day, so we were a bit puzzled. We had a look around and things just seemed ‘old’.

But the closer we looked, the more it made sense, and the more little signs we read – the more amazing the place became. 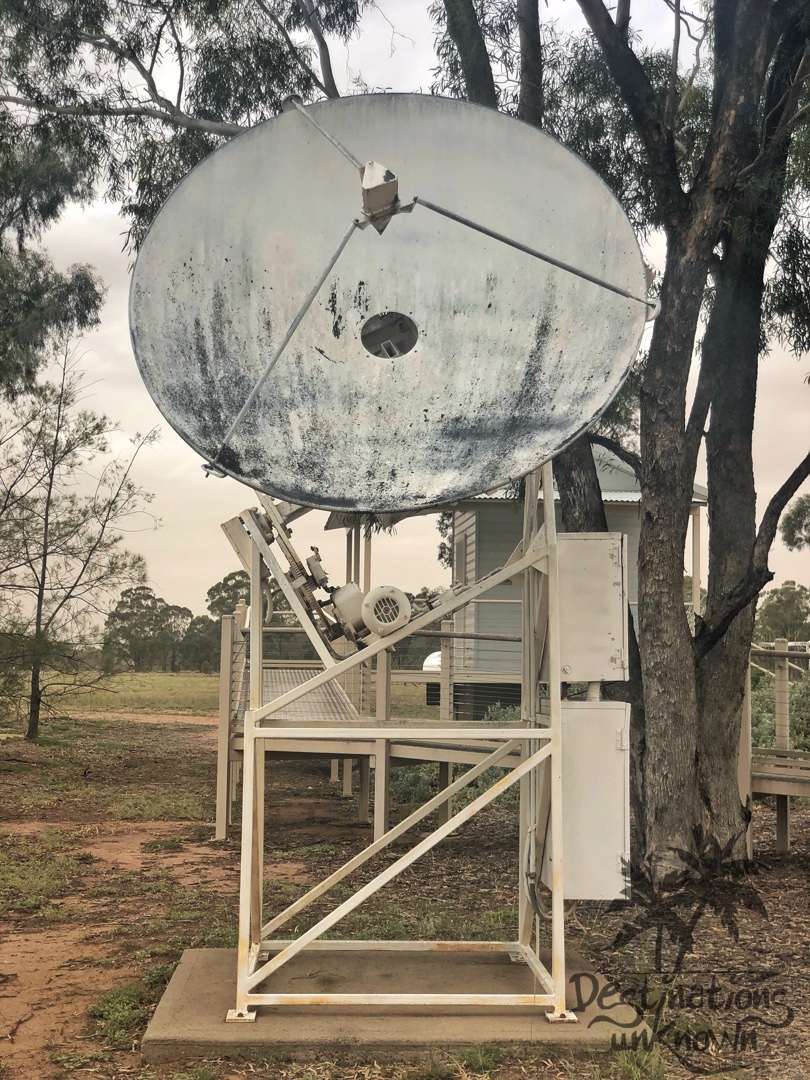 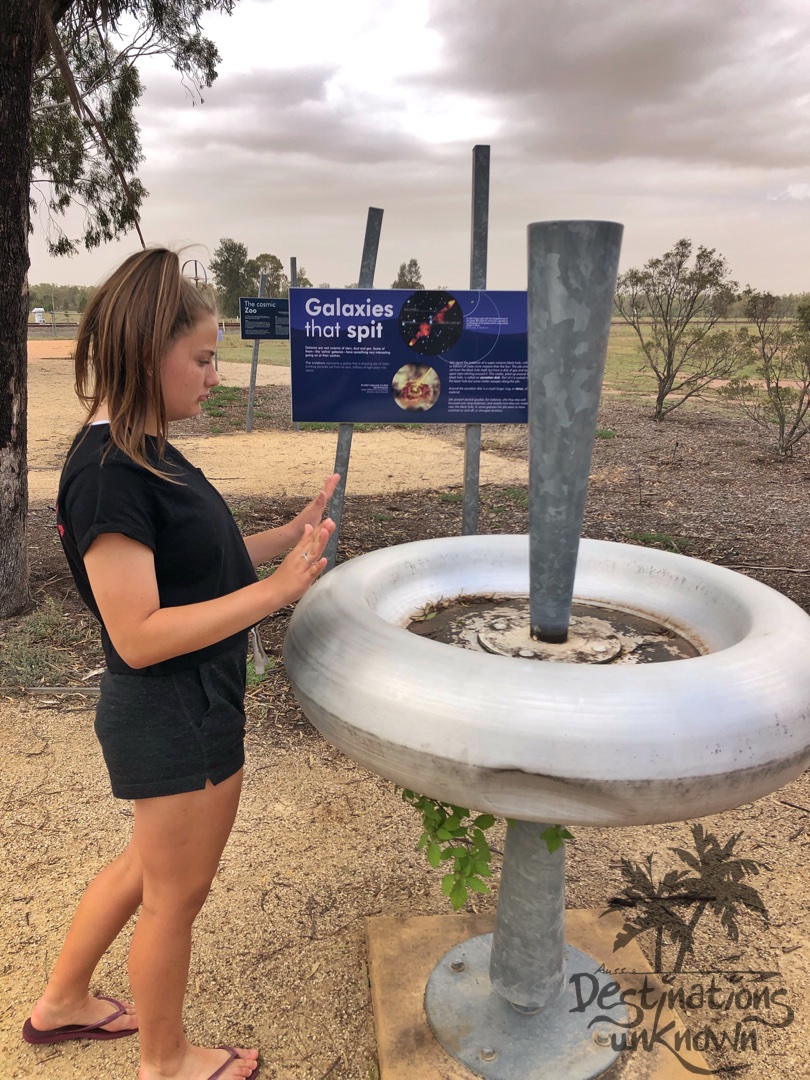 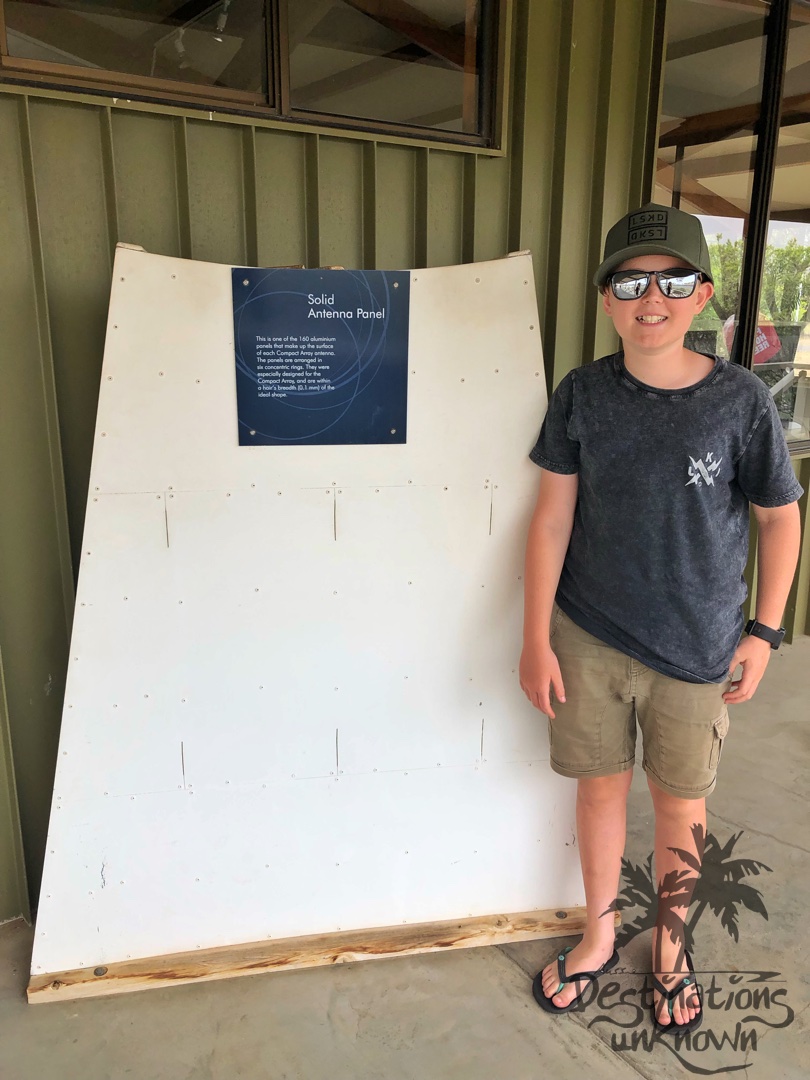 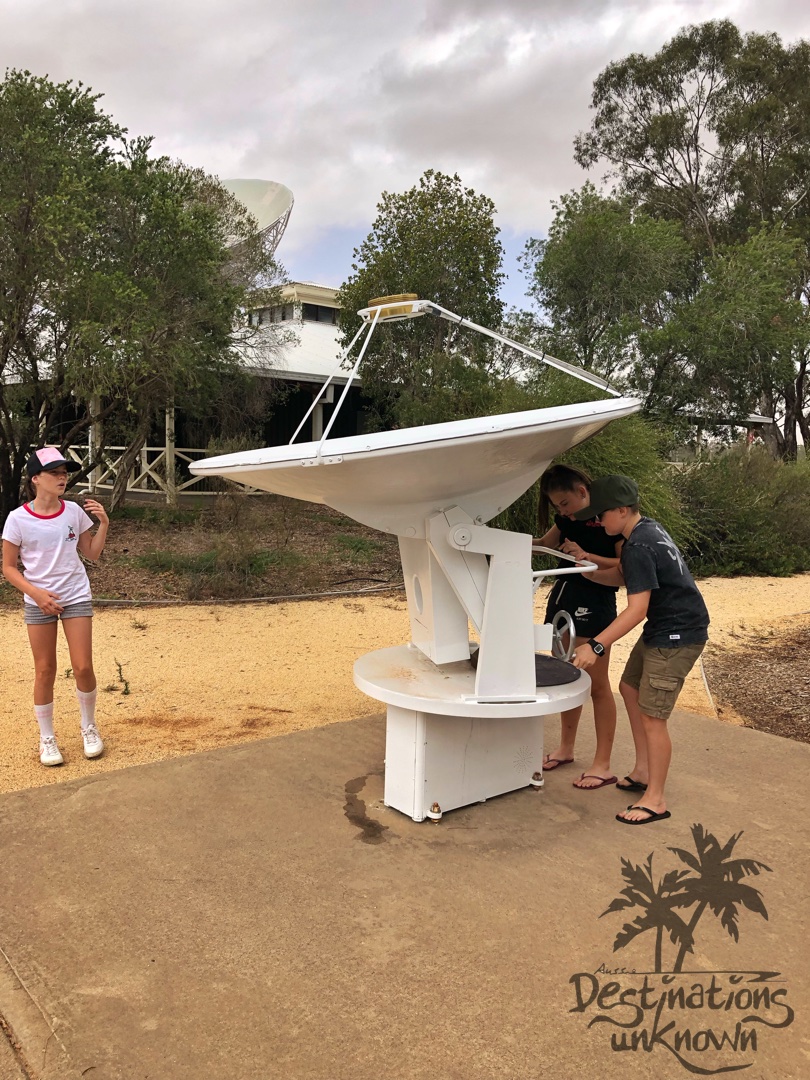 CSIRO’s Australia Telescope Compact Array is a world leading instrument for radio astronomy and deep views into the universe.

I must admit that when you see those 6 huge 22 metre dish antennas, weighing 270 tonnes each, located on a six kilometre road and railway track (or ‘telescope track’ as Chris called it)- you get kind of ‘blown away’ – especially when they start moving! They move either a lot or just a little every few minutes or so. It’s pretty impressive.

All together these 6 dishes simulate one very large antenna! 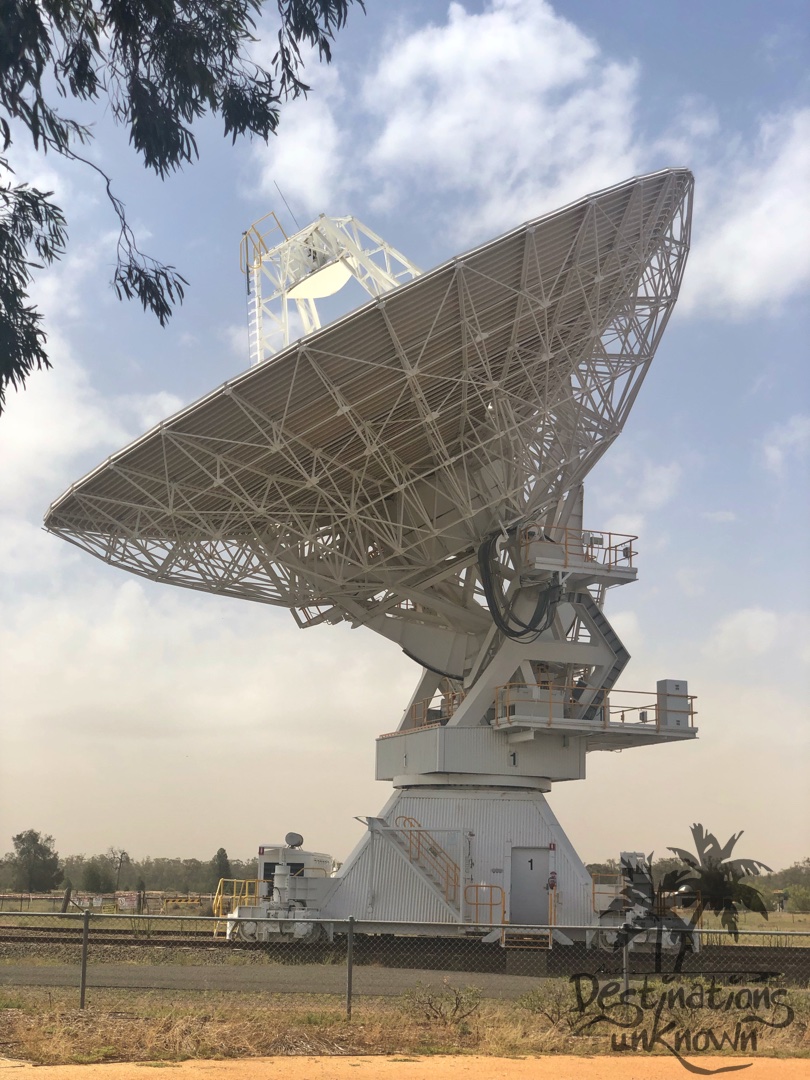 While the kids and I were wandering through the outdoor astronomy exhibits, Chris opened a door and called out that it was open! Maybe we didn’t pull the door hard enough? 🤔

The Visitors Centre is unstaffed but open from 8:00am to 6:00pm daily. Just keep trying the door!

Inside there are many more exhibits to look at and lots to read.

The kids did some activity sheets, had a look at the puzzles and Cooper did some reading. There is also a theatrette showing free films on space and astronomy. Chris and the kids spent some time in there while I headed back outside. 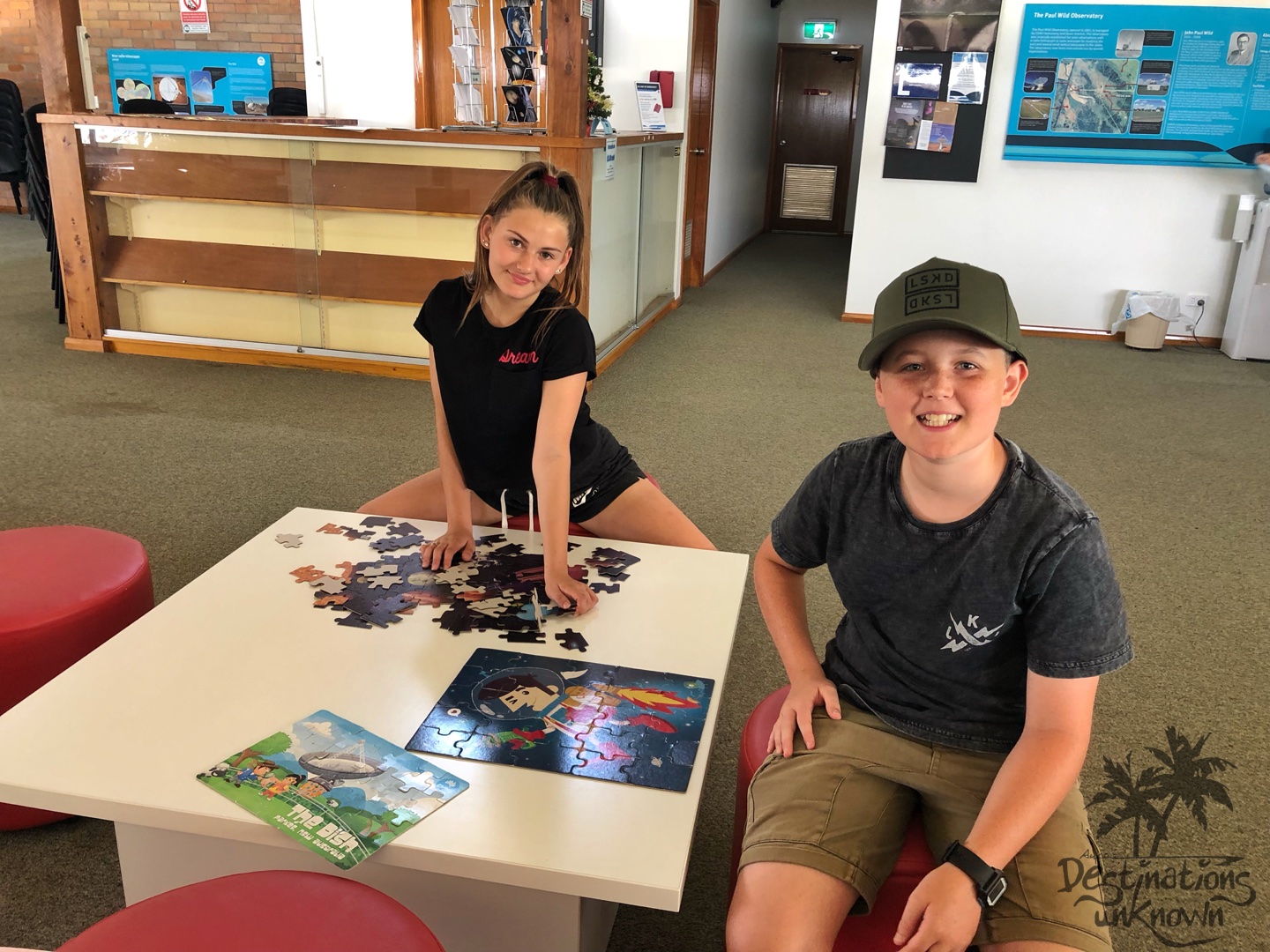 When the others came out it was all fun and games! There are a few interactive exhibits including a dish that you can spin and tilt with a wheel and our favourite- the ‘Whispering Dishes’.

This was a set of 2 smallish dishes set a long way apart and facing each other.

Chris and Cooper ran to one end and the girls and I stayed at the first dish.

We decided to play a ‘Simon Says’ type game where one ‘team’ would whisper into the dish what the other had to do.

There was hysterical laughter all around as the girls started running around the dish, jumping up and down and acting crazy as instructed by the boys.

It was heaps of fun! The way it works is that the sound waves produced by your voice bounce off the dishes surface and travel in a straight line over to the other dish. This other dish collects them and directs them to its focal point – the ears of the listener!

It was fantastic – especially when you could hear how quietly they were speaking into the dish and how loud it bounced back from the other end! 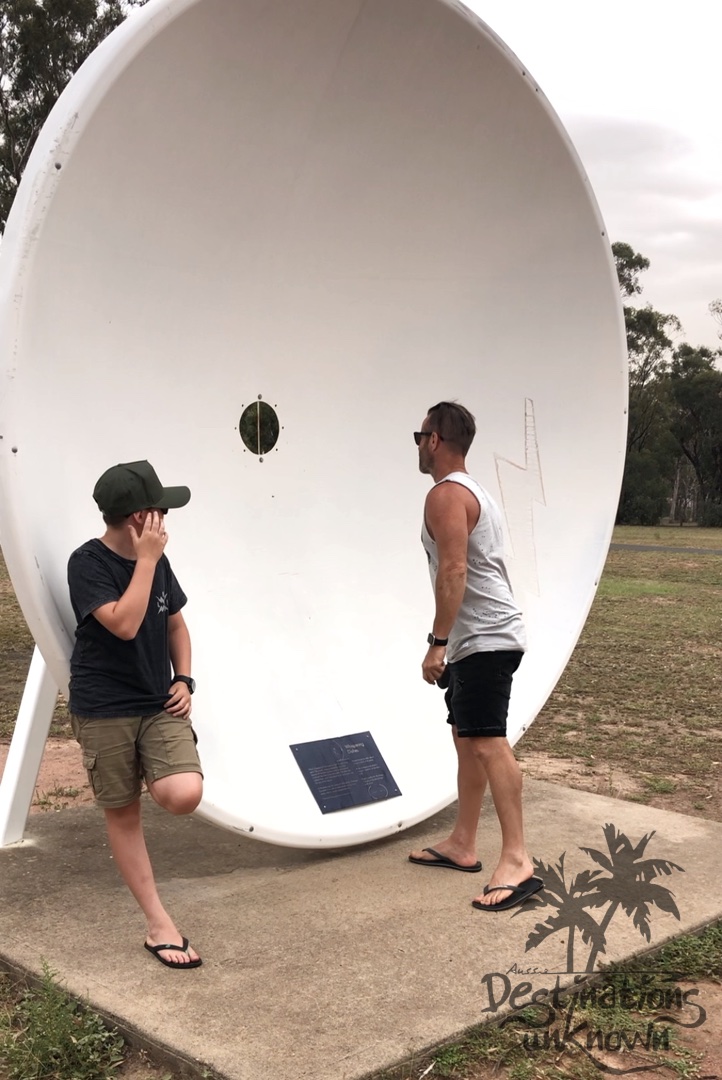 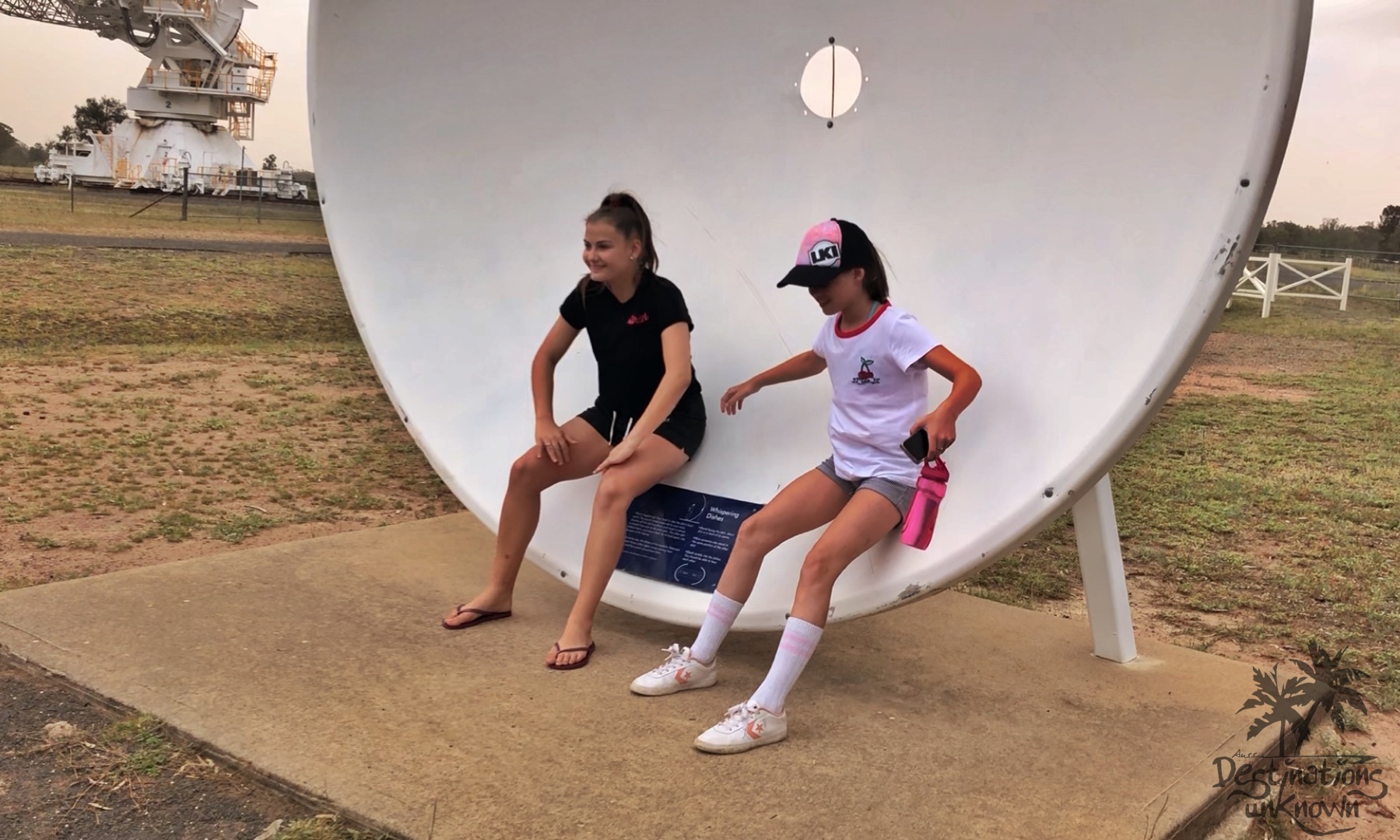 It’s free to wander around and to get into the visitor’s centre. There are also BBQ facilities to use if you feel like having a bite to eat while you’re there.

We had a great time and were excited to see how ‘The Dish’ located near Parkes, was ‘so much bigger’. Chris has been there and told us enough about this Australian icon that we were keen to check it out.

It was the next day, on our way from Narrabri to West Wyalong that we stopped and saw the huge dish that played a key role in televising images of the Apollo 11 Moon landing on 20 July 1969. 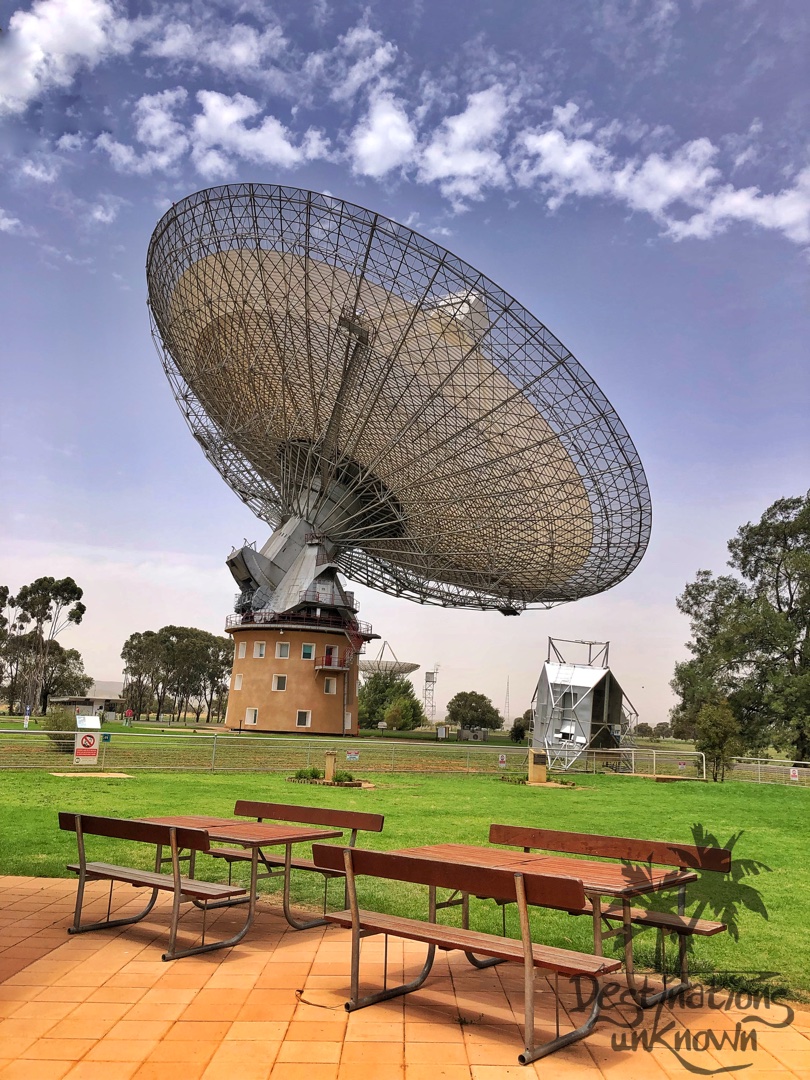 On the way we saw lots of three-dimensional planet models in various rest stops and it wasn’t until we stopped at Gilgandra did we get to find out what they were. 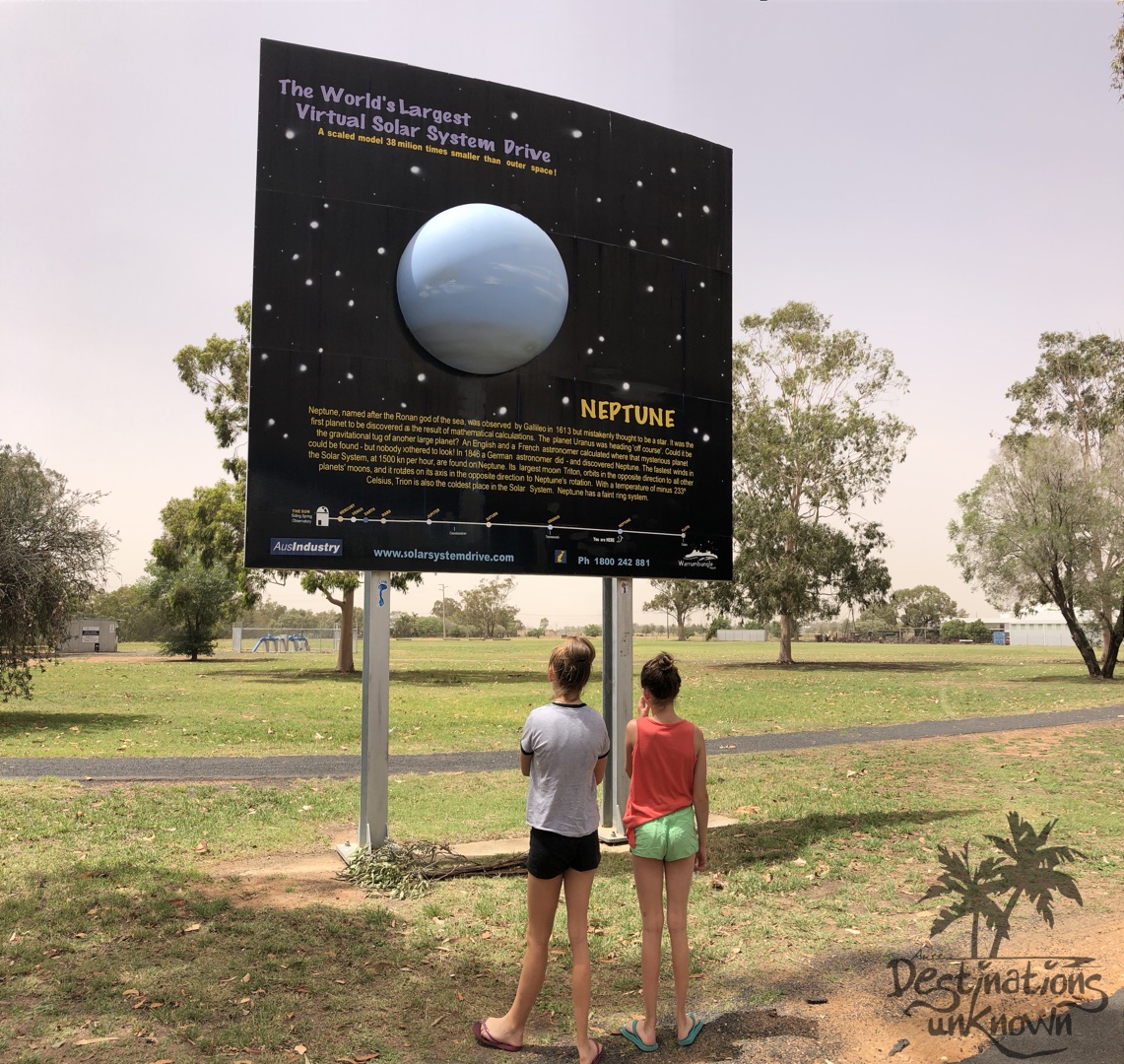 They are all part of the Worlds Largest Solar System Drive! The planets are displayed on huge billboards with the size of the planets and the distance between each billboard scaled relative to the dome – the Sun – along the five main roads that lead to Coonabarabran in regional NSW. You can also learn interesting facts about the Solar System and the unique features of each planet. Incredible!

These only increased the excitement as we approached our next destination.

With a diameter of 64 metres, Parkes is one of the largest single-dish telescopes in the southern hemisphere dedicated to astronomy so; it’s no wonder that we could see it from the highway before we even took the turn down the road that led us to the centre. 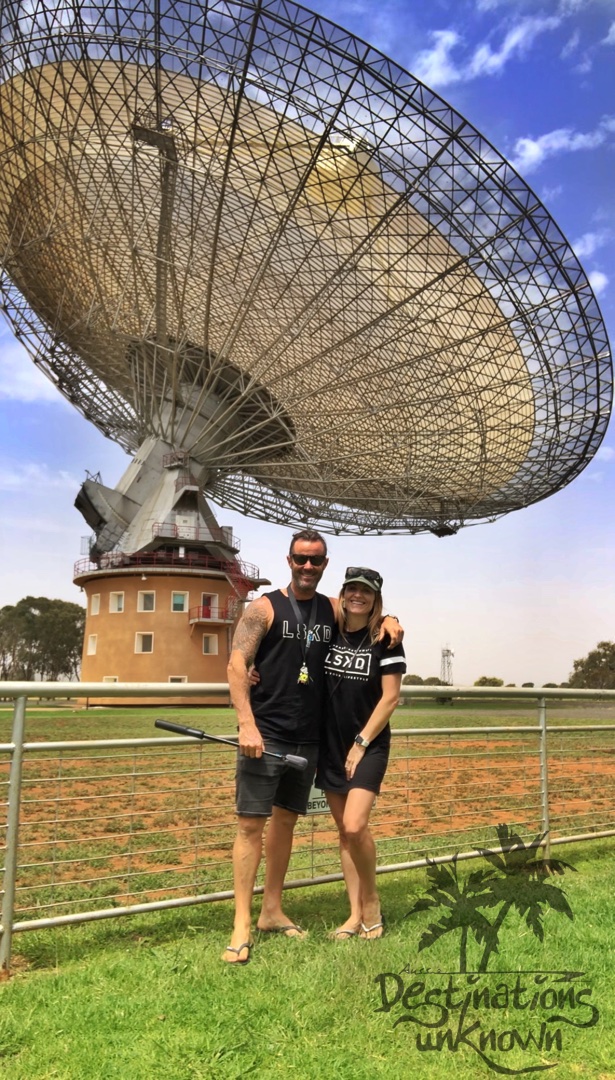 There is a big carpark that had only a handful of cars and lots of lovely shady trees. We walked through the gardens and outdoor exhibits (not unlike the ones we had seen the day before) and the kids were pretty excited to see bigger and what appeared to be newer Whispering Dishes. 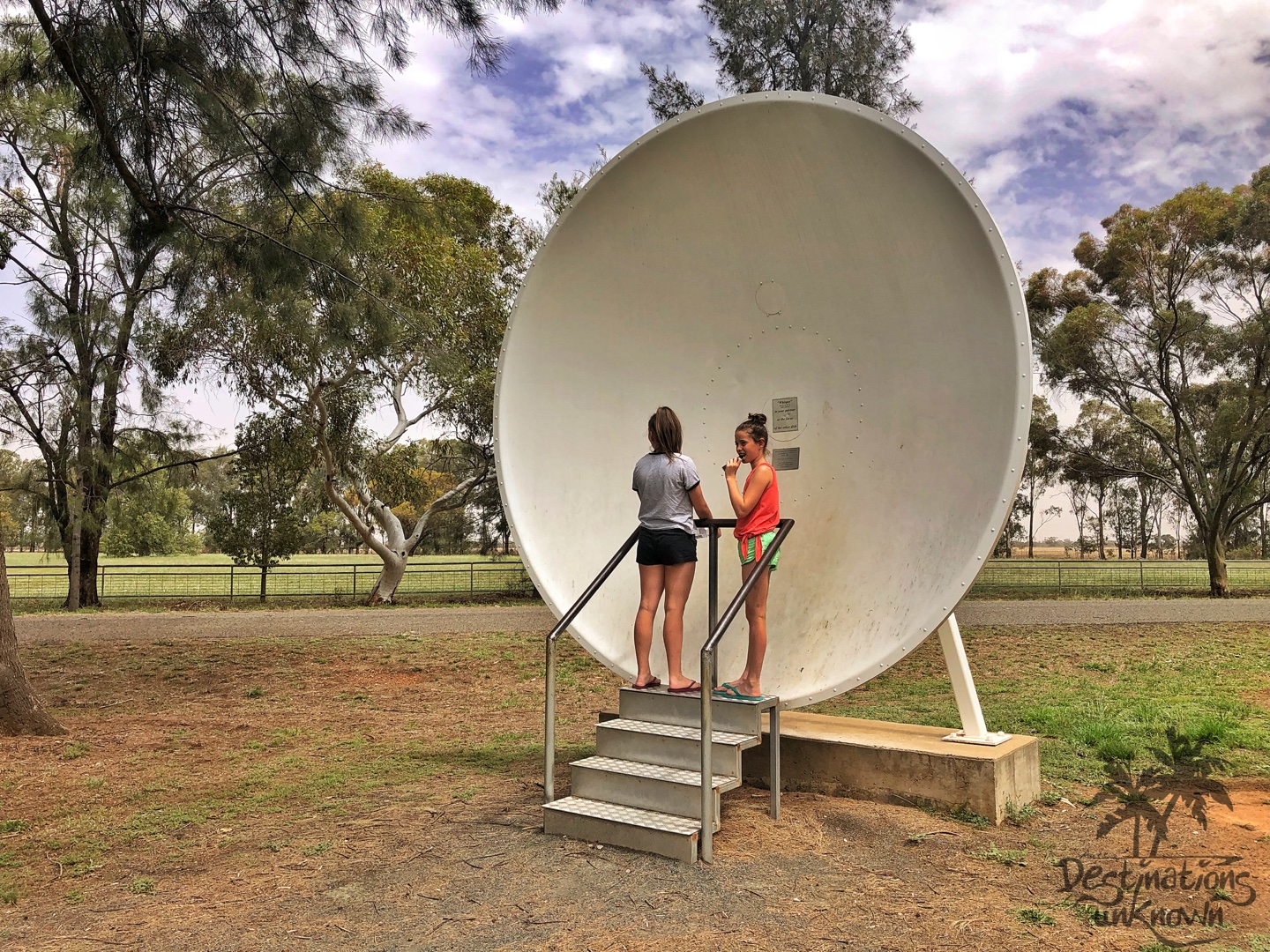 Inside the visitor centre is amazing – there is an abundance of things to see and do including a theatrette, gift shop and café. Needless to say, the kids headed straight to the counter and ordered themselves some lunch which was eaten with a pretty speccy view of The Dish right out the window.

We read the signs that were dotted around and once again were completely astounded by the vast amounts of pretty crazy information. 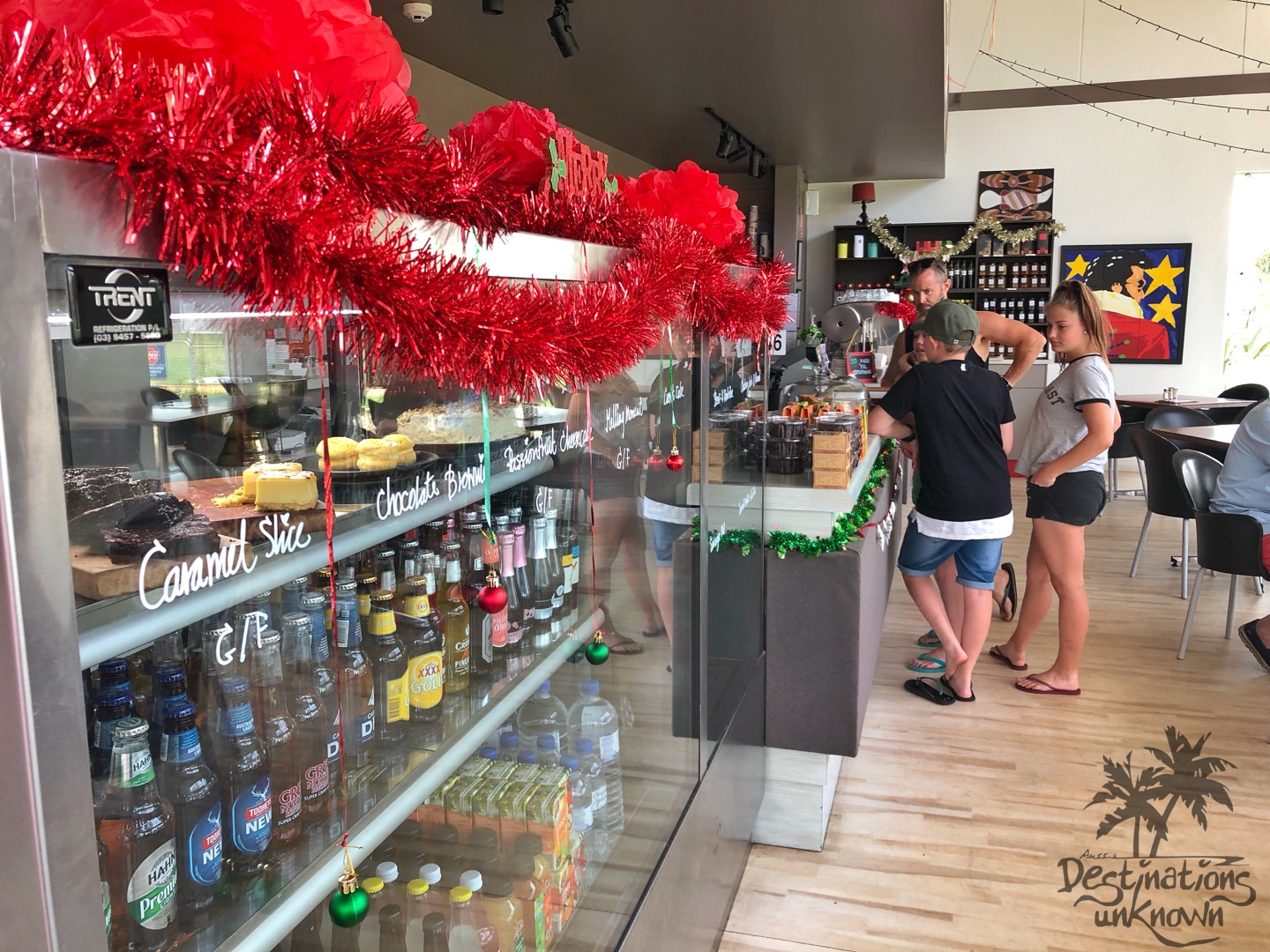 “By almost any measure, the Parkes Radio Telescope is the most successful scientific instrument ever built in Australia. The telescope is unsurpassed in terms of the number of astronomers, both national and international, who have used the instrument, the number of research papers that have flowed from their research, and the sheer longevity of its operation (now over fifty years),” wrote Peter Robinson for the 50th anniversary of the telescope, in 2011. 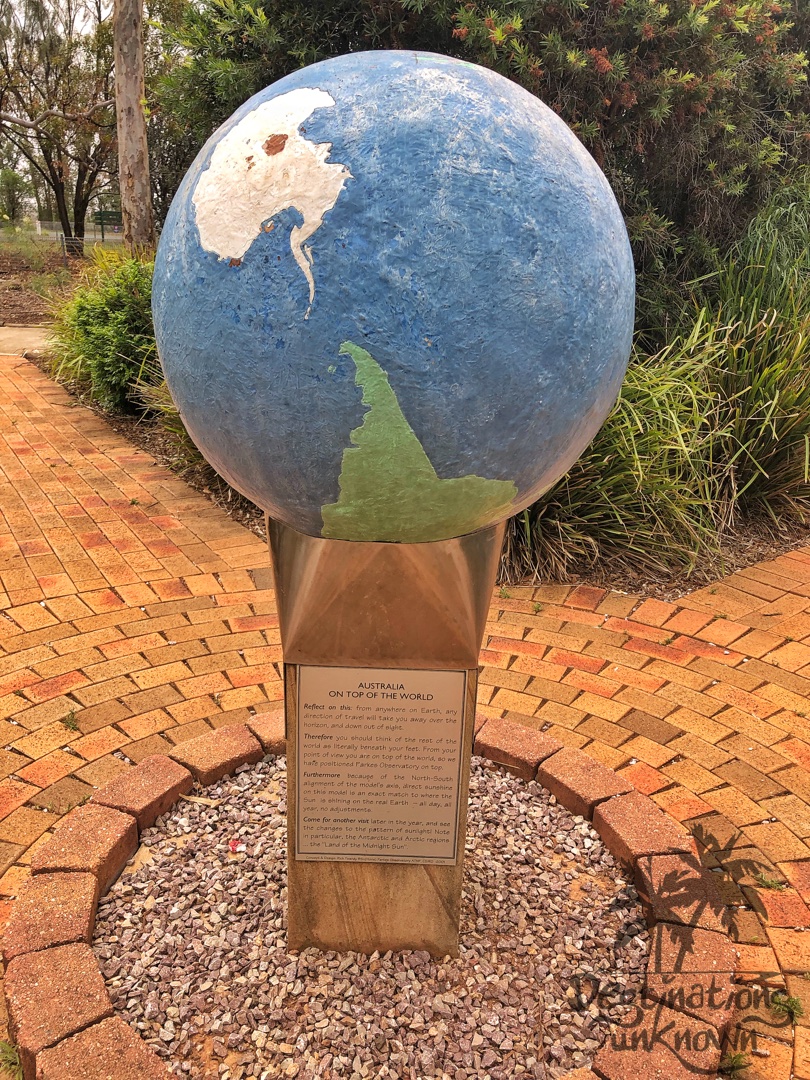 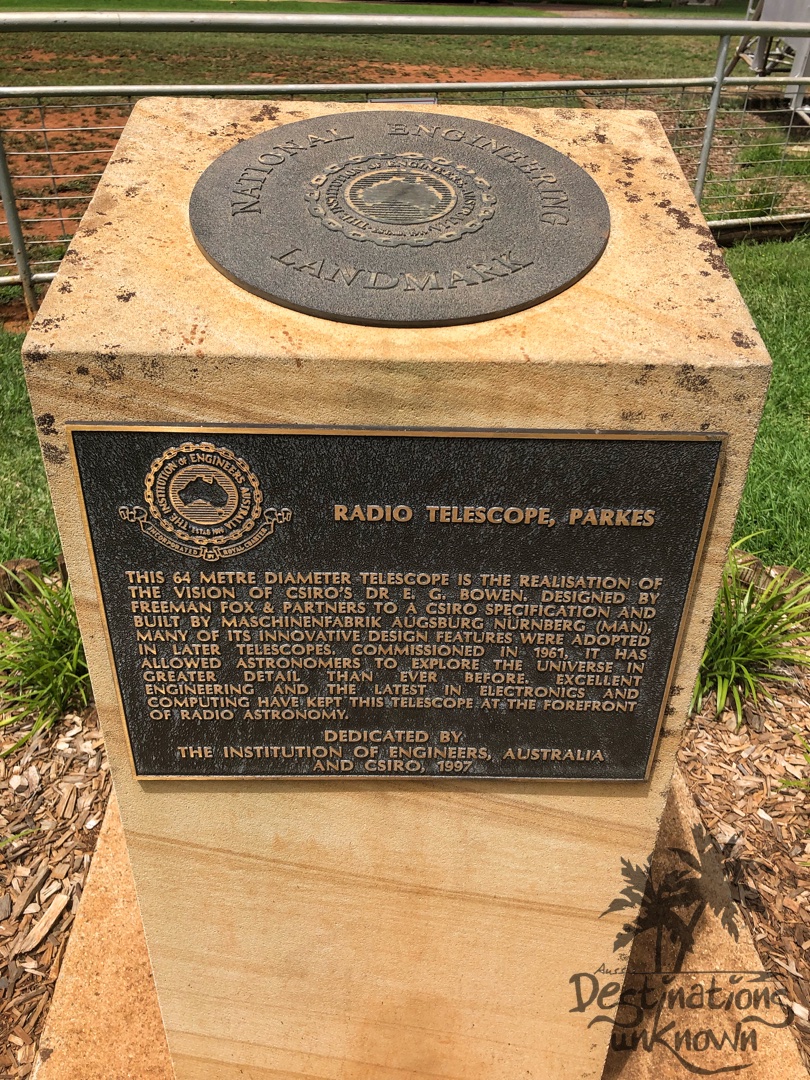 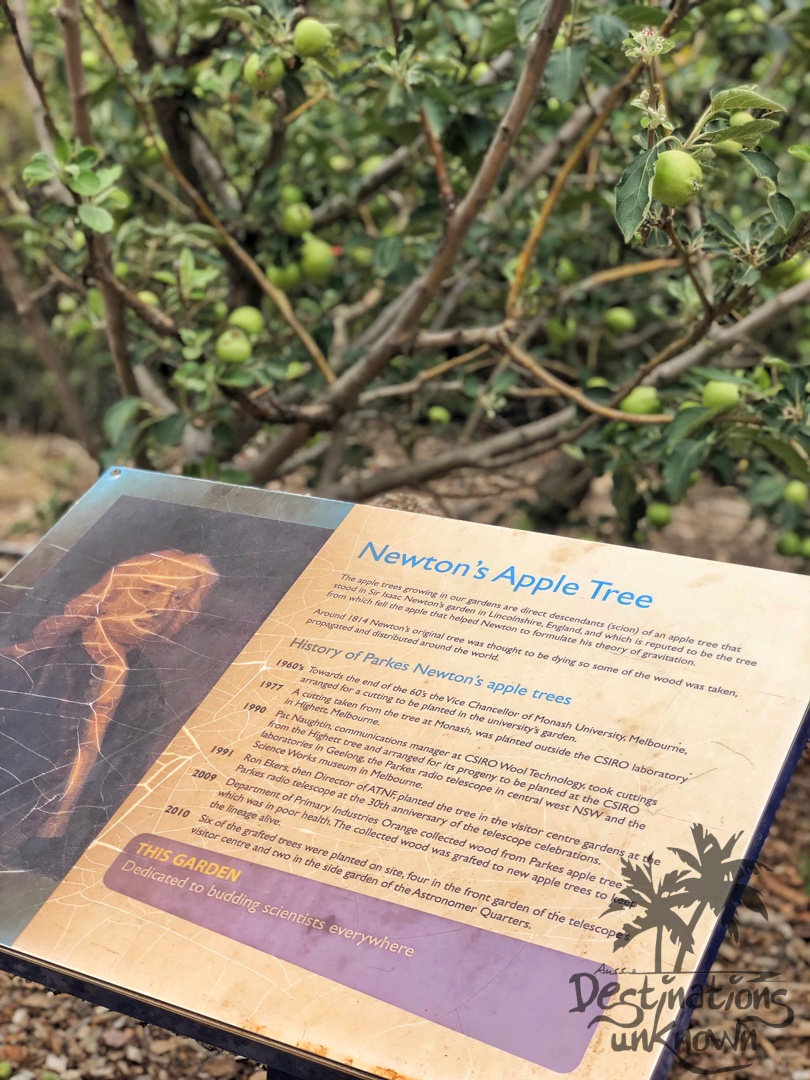 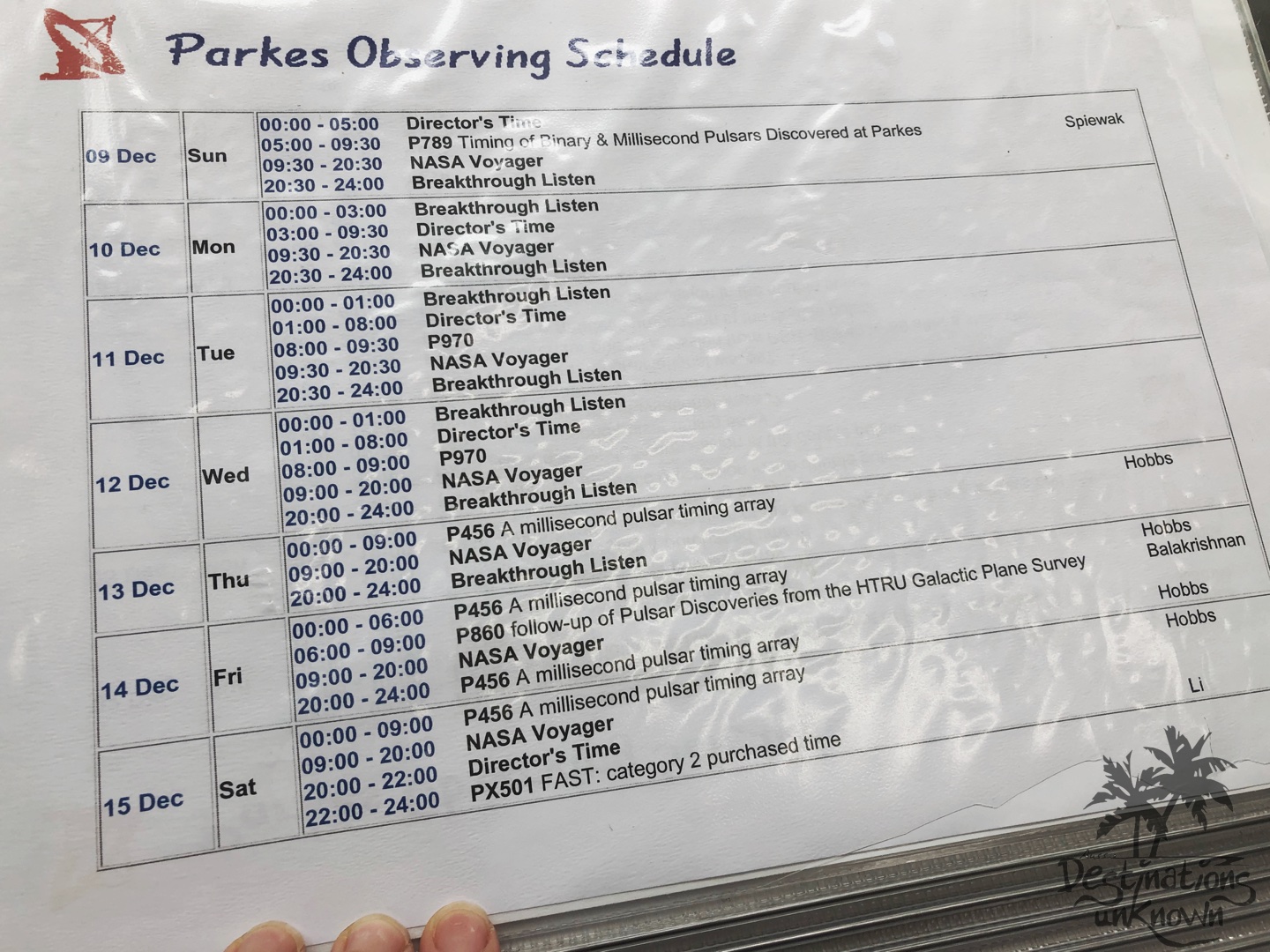 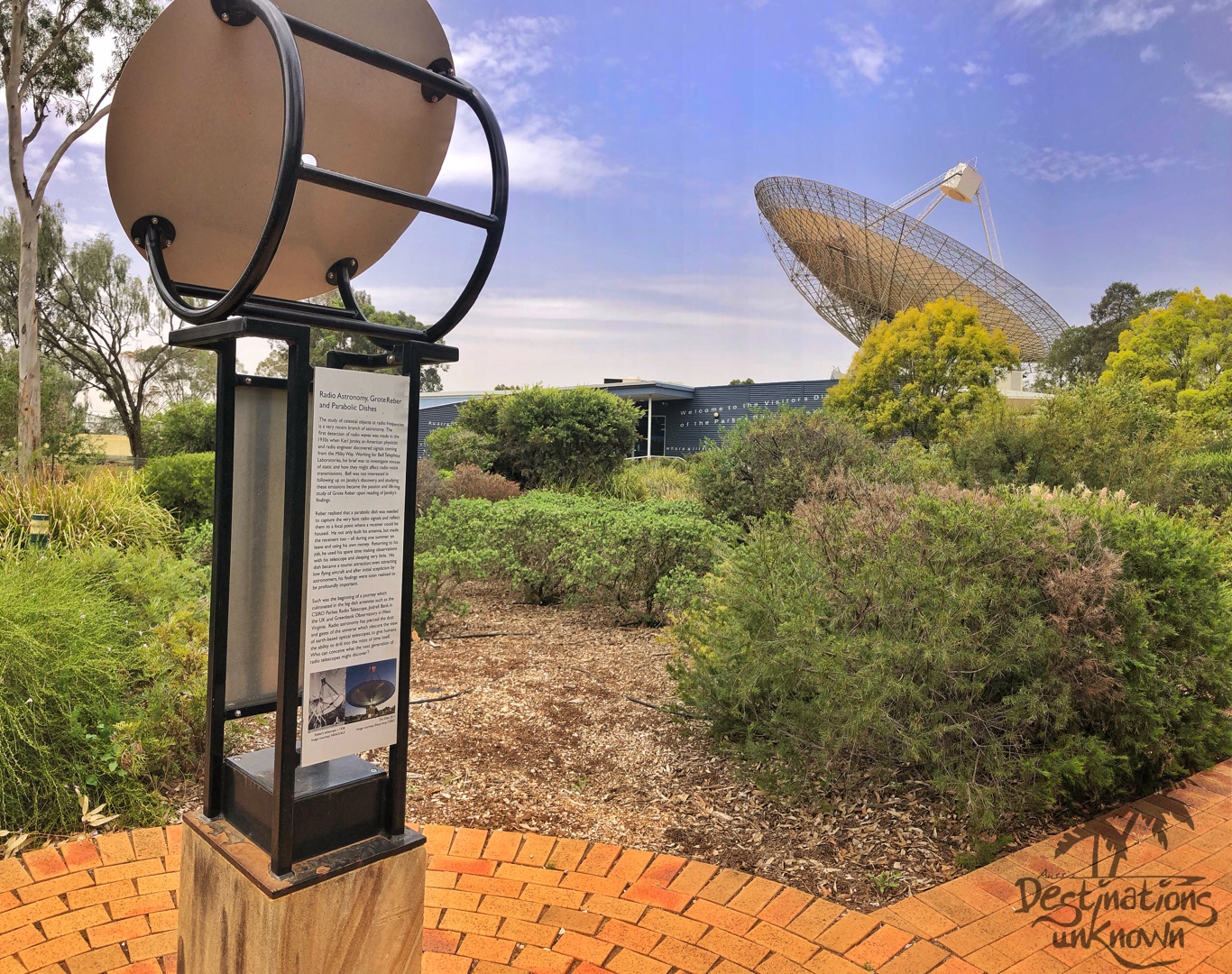 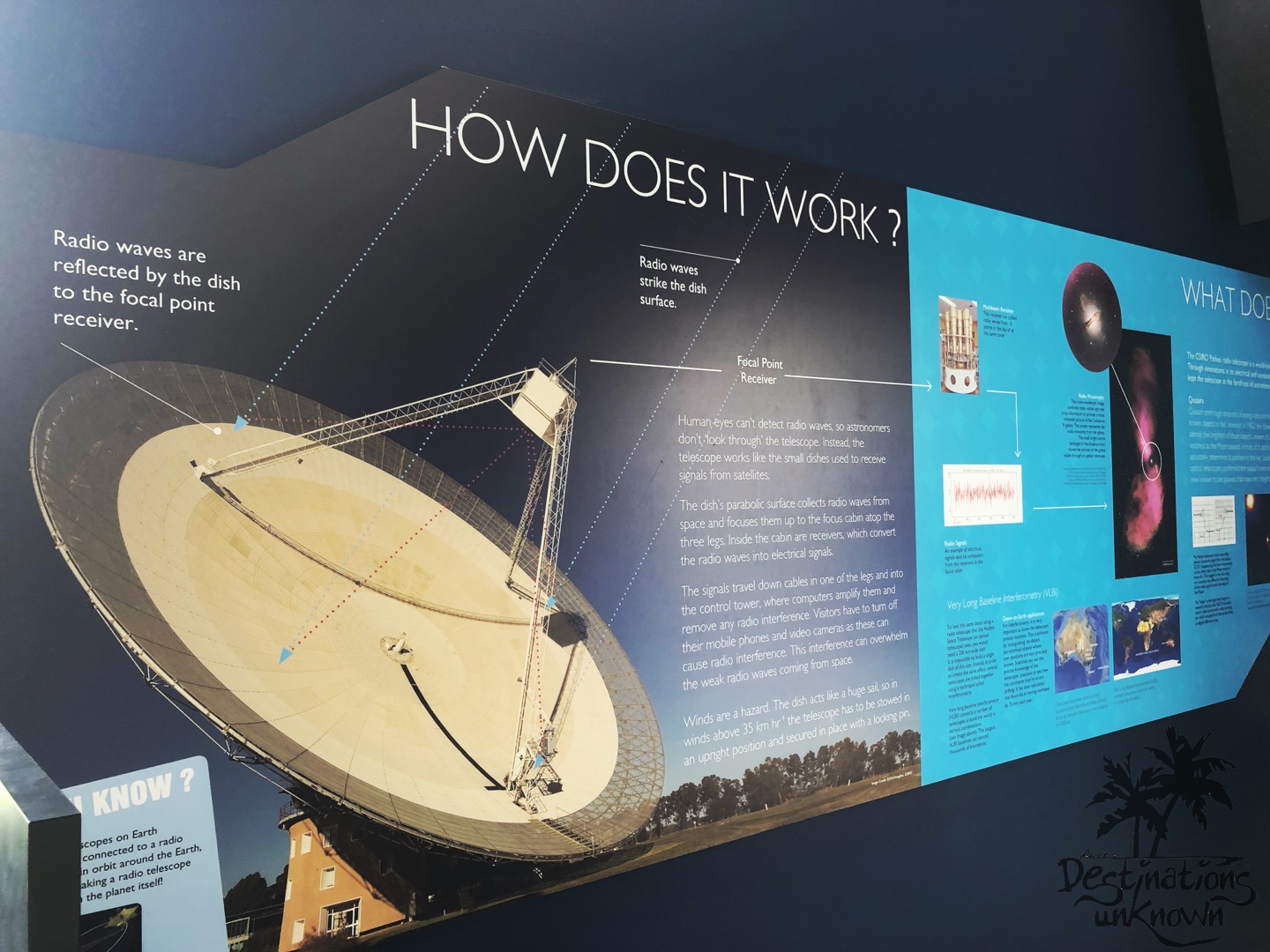 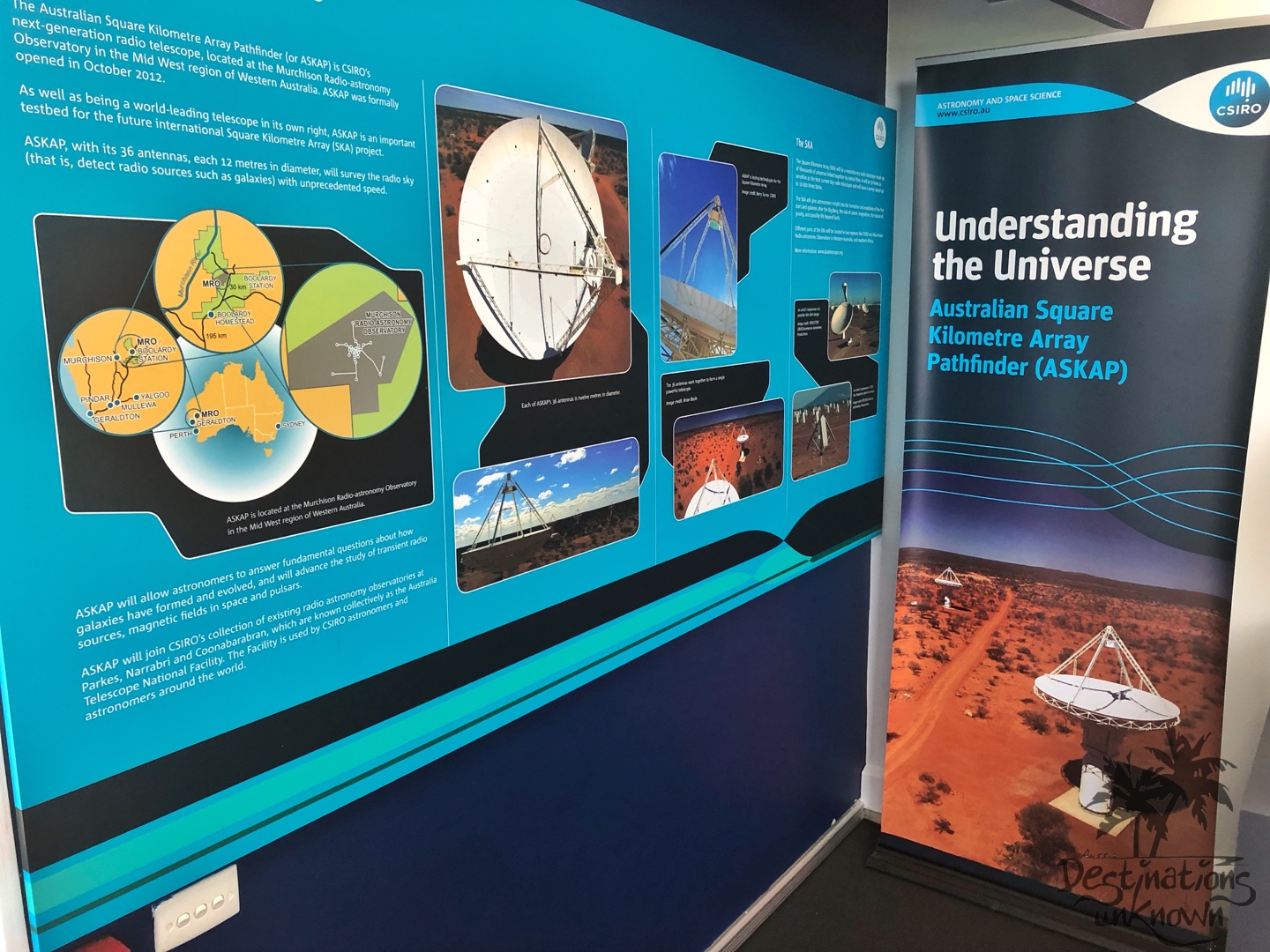 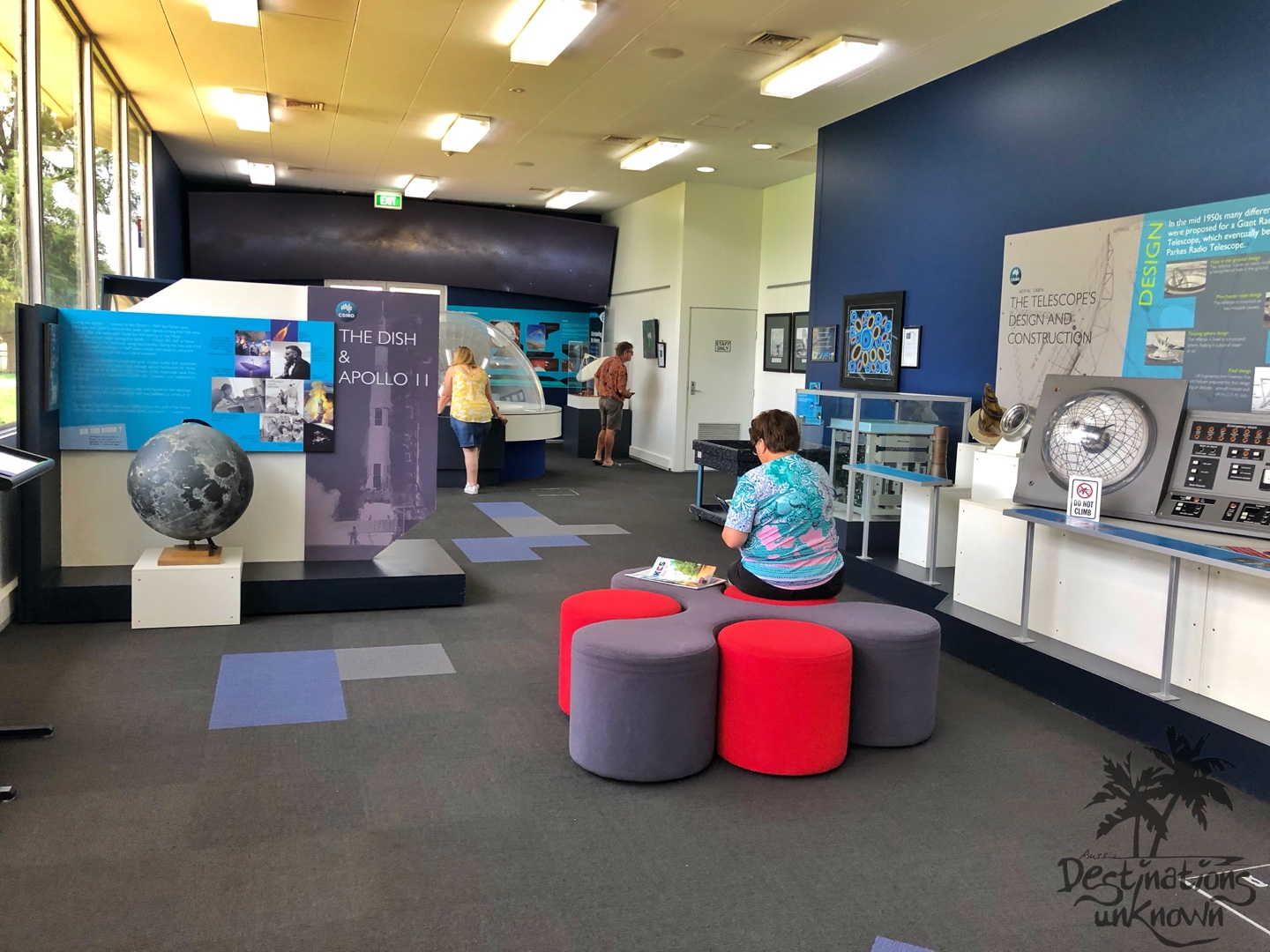 There is so much interesting information about ‘This Dish’ that I could go on forever! But I won’t. I found 4 very interesting facts on the CSIRO website that I’m going to share with you.

1. The dish is not fixed to the top of its tower, but just sits on it.

The moving part of the telescope weighs 1000 tonnes – as much as two Boeing 747s – but it is not fixed to the tower, and instead sits atop it with its own weight holding it down.

2. The site was bought from a farmer named Australia.

Australia ‘Austie’ Helm (named as such because he was born on a special wartime Australia Day in July 1915) was the owner of a 360 hectare property known as Kildare in the Goobang Valley. After the site of Parkes had been selected, negotiations began and, in the end, Austie sold 70 hectares to the CSIRO for the radio telescope.

3. It has listened for ET

The Parkes radio telescope was the first stop for US researchers from the SETI Institute in California when they launched Project Pheonix – a search for extra-terrestrial intelligence by analysing patterns in radio signals of 800 nearby stars, similar to ours.

4. In the famous cricket scene from the The Dish, the actors used a tennis ball, not a cricket ball.

One of the problems the directors had with The Dish movie was showing how big the dish actually is and came up with the idea of playing a game of cricket on it. As a real cricket ball would damage the surface, they were given a soft tennis ball instead.

These 2 places are incredible … and if you are heading north or south and have to choose which route to take, be open to the inland road and all the adventures it has to offer, like this one! You never know what your kids will remember from your adventures; perhaps it will be the huge dish towering above the cafe, or it could be just the fact they had some pretty tasty chips and a sausage roll for lunch! 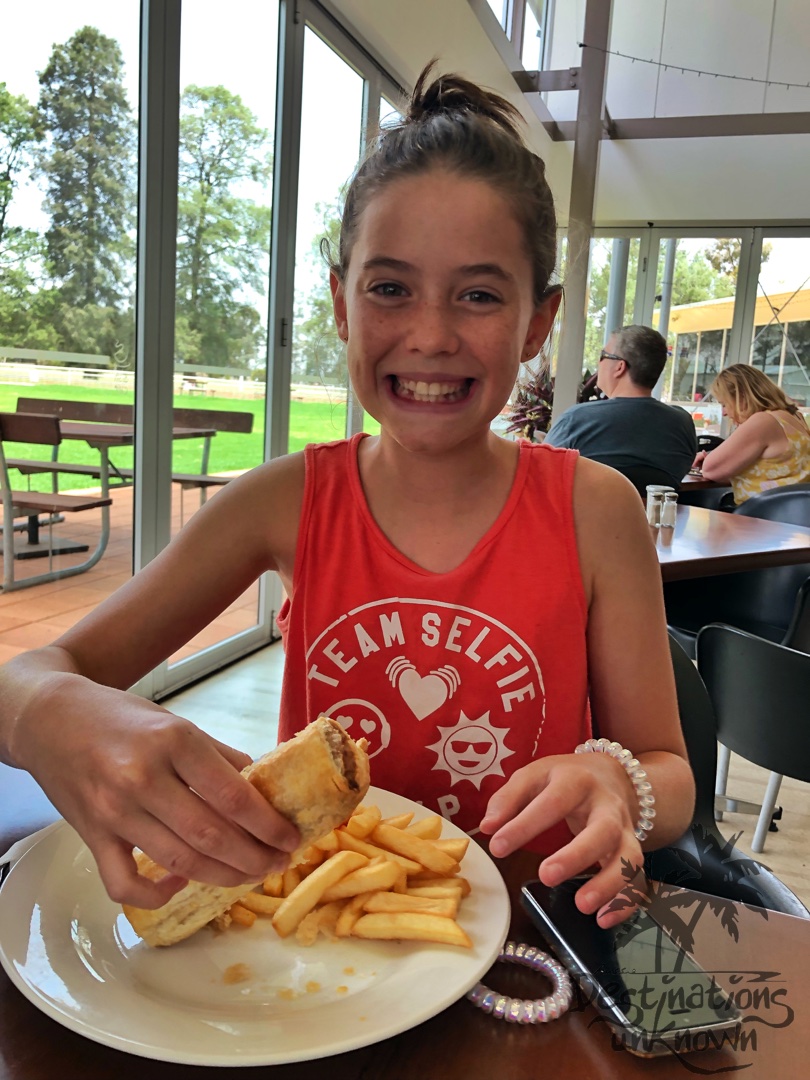