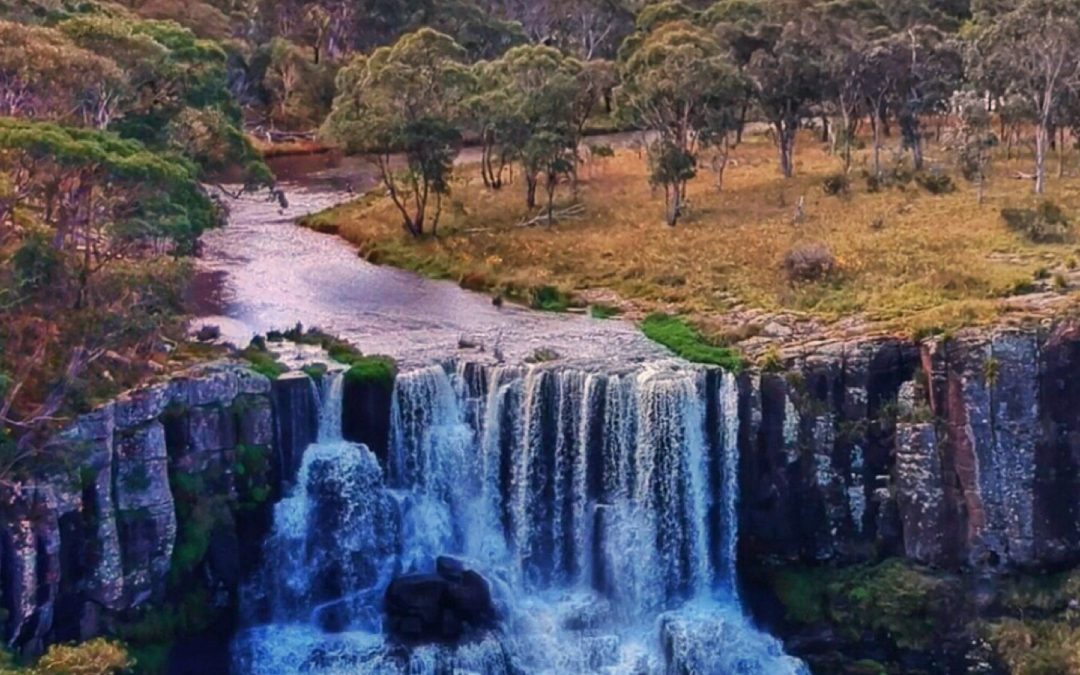 We began our Easter as many other Queenslanders would have – stuck in traffic in the pouring rain. Not only did we have long weekend, Easter traffic, but the Commonwealth Games were wreaking havoc in this beautiful city as well.

Never the less, we made it across the border and into NSW as we headed from Brisbane down to Sawtell to spend Easter with our mates at the BIG4 Sawtell Beach Holiday Park.

Thankfully the skies cleared up and the sun started shining as we approached our destination, and after weeks of what seems like non-stop rain in Brisbane, this was a very welcome change. 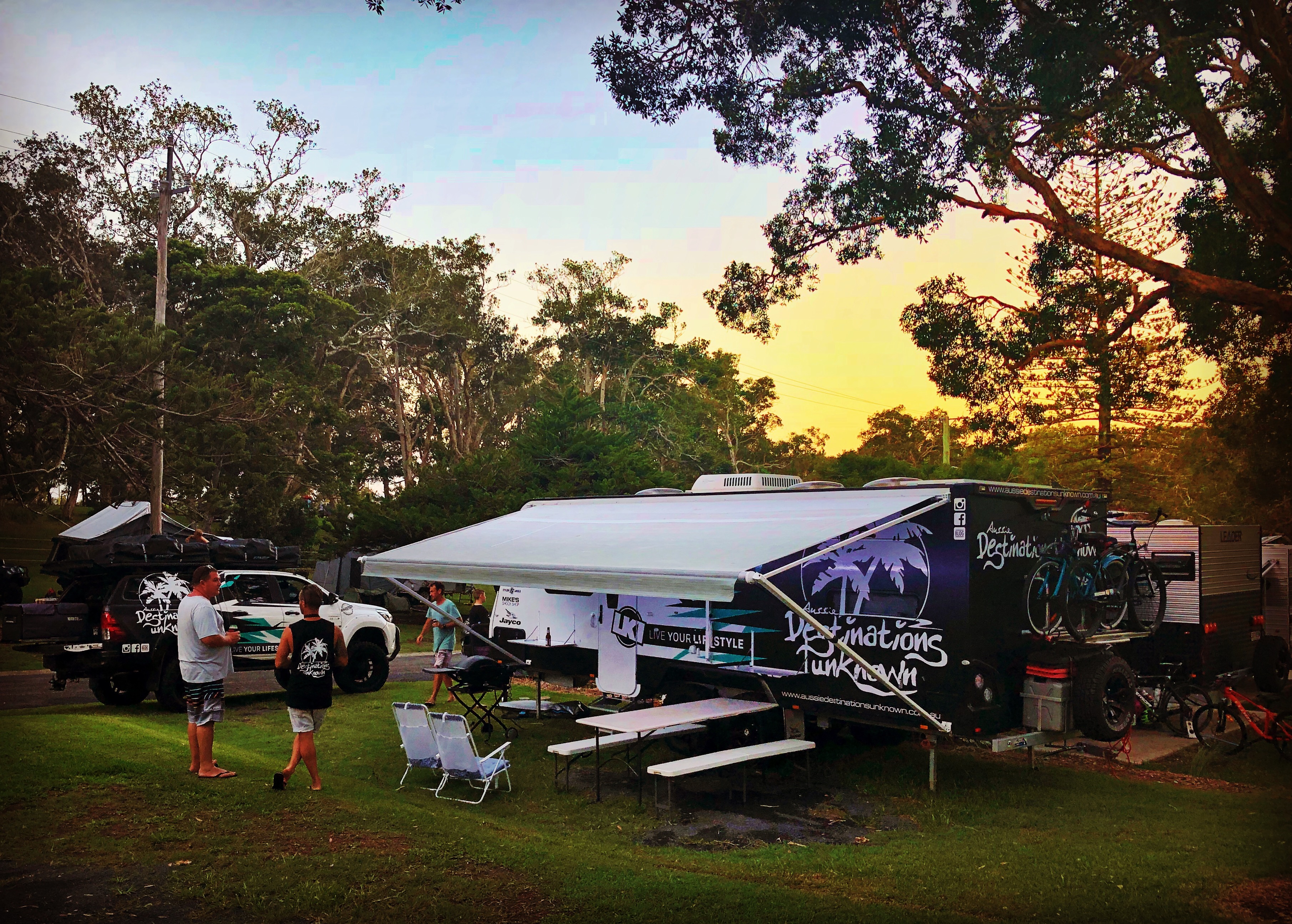 Set up in time to watch the sun go down

The sun was setting as we arrived, and as we had called ahead, we were met at the gates with our amenities key and our little info packs. We set up and went and said hi to the guys. Chris cracked open a beer and I fired up the Weber.

Dinner was chicken kebabs, cauliflower rice and the most scrumptious zucchini and egg salad. Chocolate cake and custard followed. With our bellies full, and camp chairs in hand, we headed down to the other guys vans for an evening of laughter and storytelling. 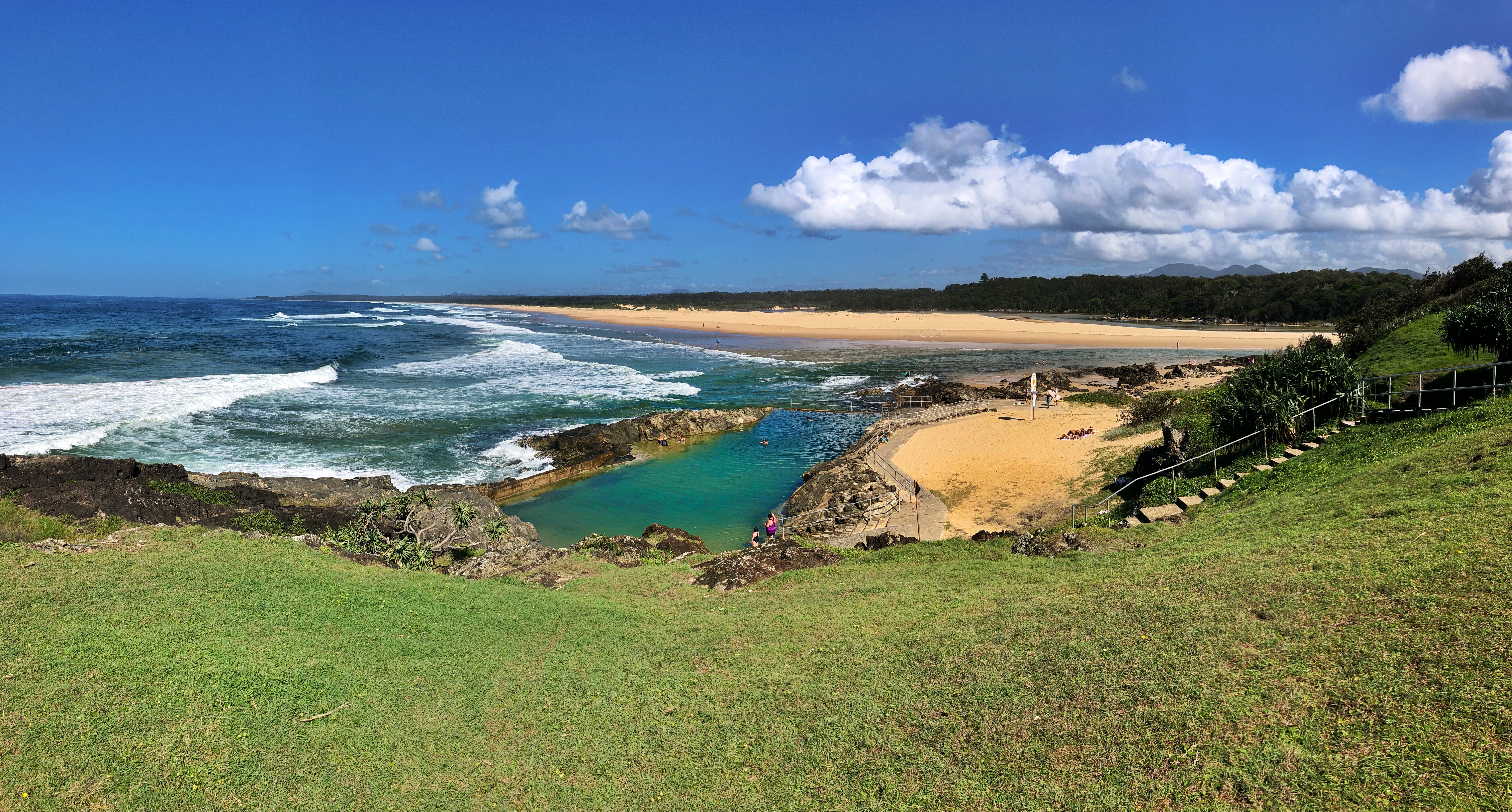 The following morning, following a restful night’s sleep of over 9 hours, we drove the 2 minutes up to Bonville Headland to take in the views. Dazzling sunshine reflecting off the turquoise ocean was an incredible way to start our Easter vacation.

We sat and watched dolphins surfing the waves alongside those who were clambering over the rocks carrying their boards just moments earlier. Families were swimming in the tidal pool below as others were carrying hot drinks from the coffee van and sitting down to admire the view. Some were walking the paths, others taking photographs. It’s quite a busy little spot!

From there we headed into the tiny town of Sawtell, parked the car and went for a wander. The old buildings are beautiful, especially the old movie theatre – it has so much character! We admired the huge, twisted trees that were spreading their branches out over the road and smiled at the many locals and tourist who were sitting in the café’s dotted along the street. 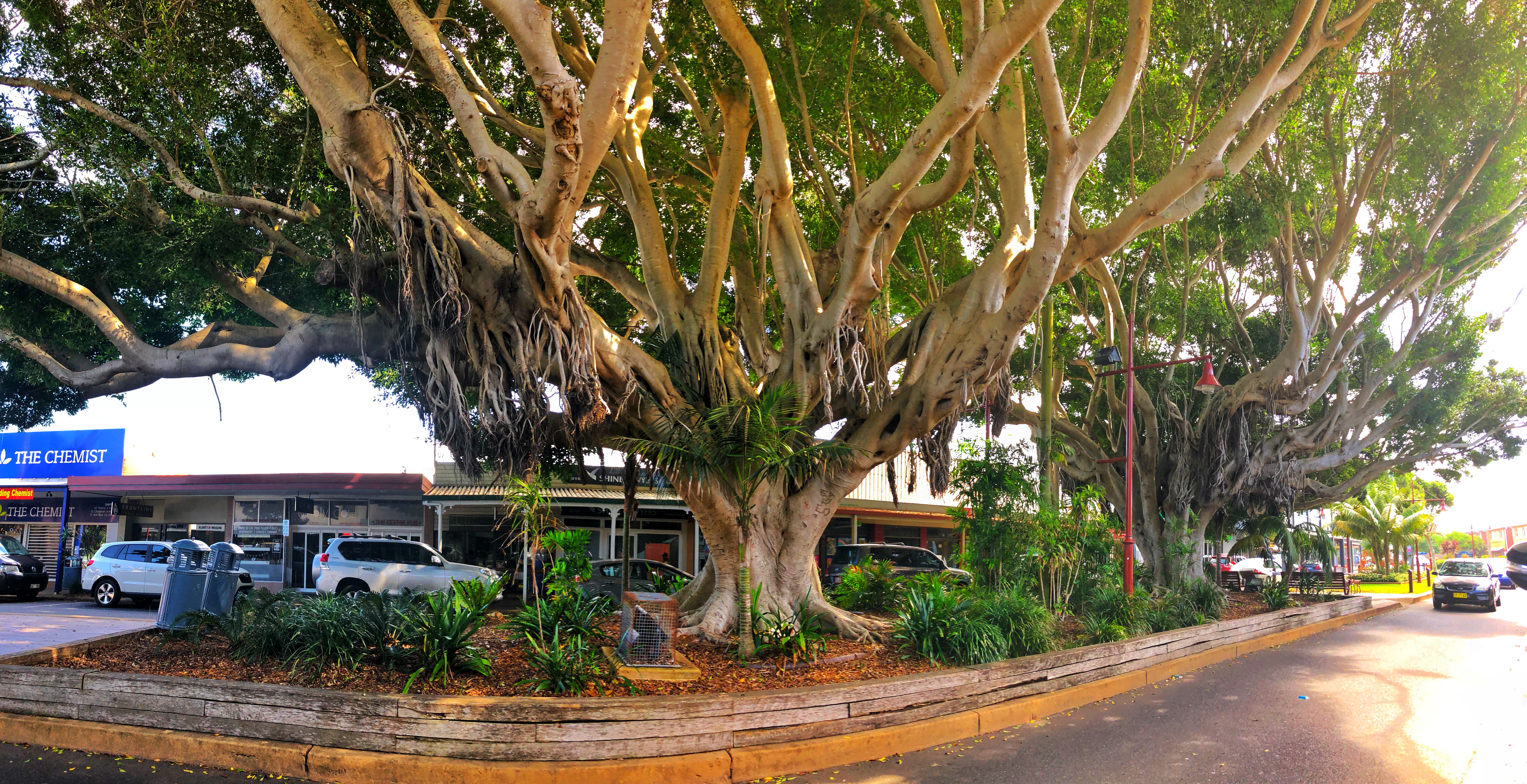 By this time, it was quite warm, so we headed back to the caravan park and changed into our swimmers and went down the front to the inlet beach where our friends were with their kayak, SUP and tinny. We spent an hour or so playing on the beach and in the water, and then we went back to the van to lie in the sun and read, or in Chris’s case – sleep! 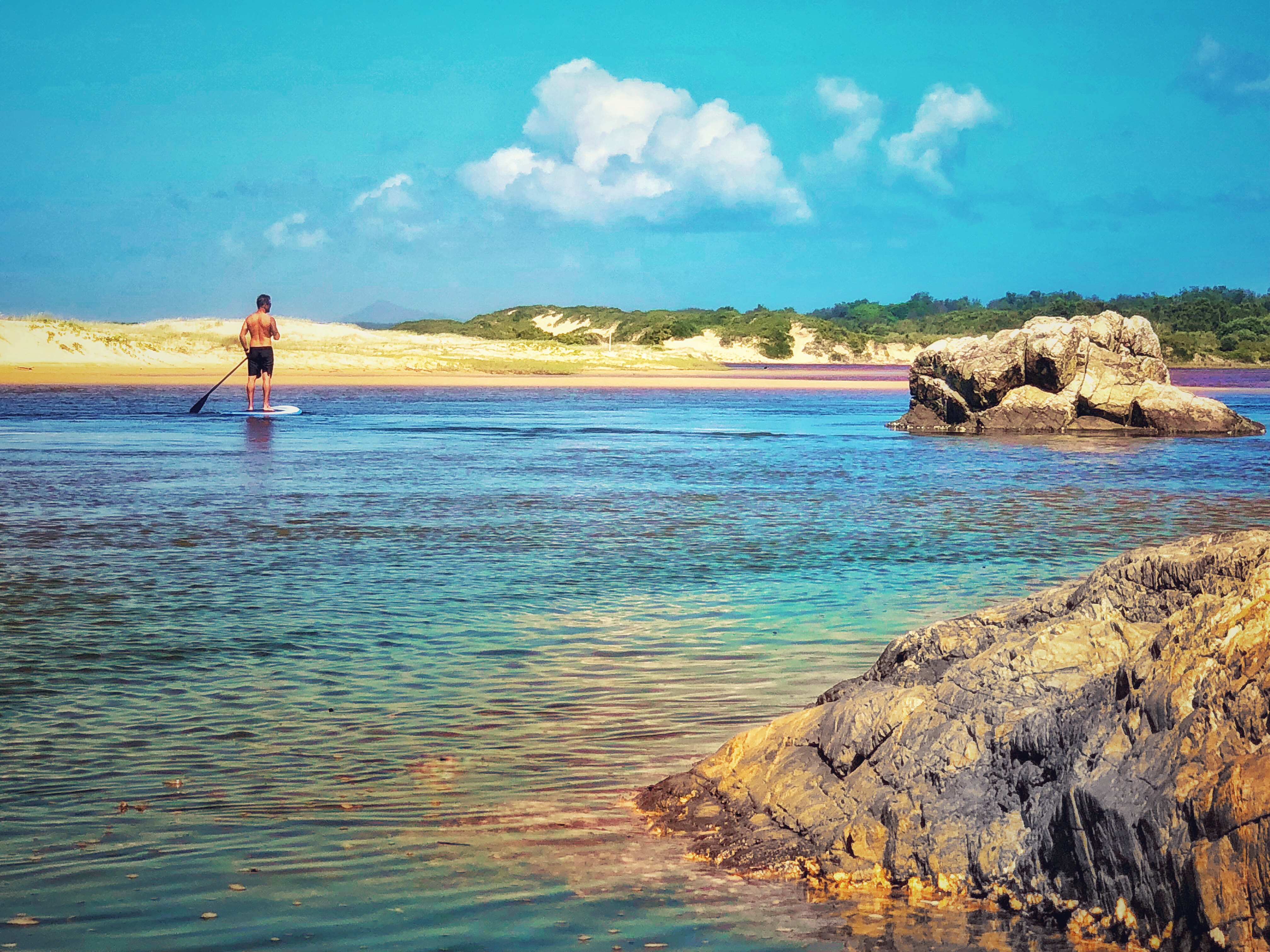 This is right out the front of the caravan park 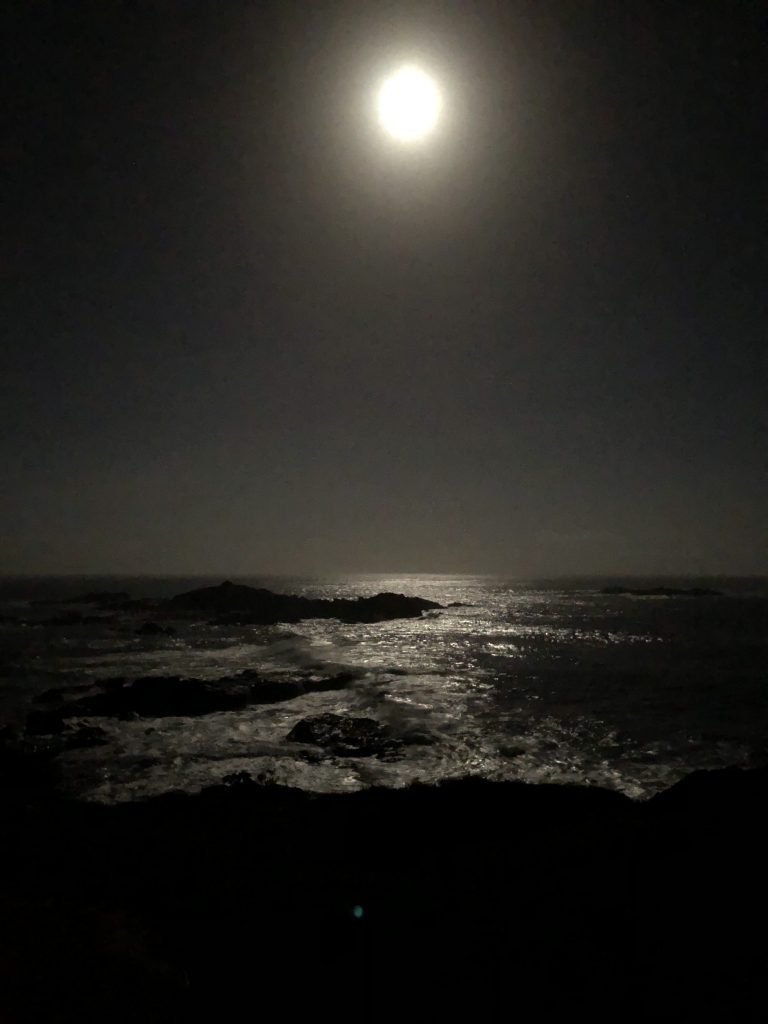 This view, this moment, was unforgettable.

As the sun disappeared behind the horizon, we went down to lay on the Village Green and watch the moon rise over the Pine Trees. It was a full moon and it was beautiful!

So beautiful that we jumped in the car and headed back up to Bonville Headland to watch it rising up over the dark blue ocean and frothing, bright white waves.

I tried to capture the moment with video and my camera but failed miserably. It’s one of those moments that will be etched in my memory forever; the smell of the ocean, the soft warm breeze and the silver moon casting its silvery light over the ocean below.

The next morning, I set my alarm to go off allowing me just enough time to get down to the water to catch the sunrise. It was so very calm and still … almost ethereal.

The most beautiful time of day

The occasional bird was singing, and every now and then a fish would jump out of the water, but aside from that – silence, as the sky slowly became lighter, the sun yet to make an appearance. I managed to capture the moment almost perfectly before Chris called me to tell me he was headed back up to Bonville Headland to watch the sun rise.

Such beautiful colours playing on the water 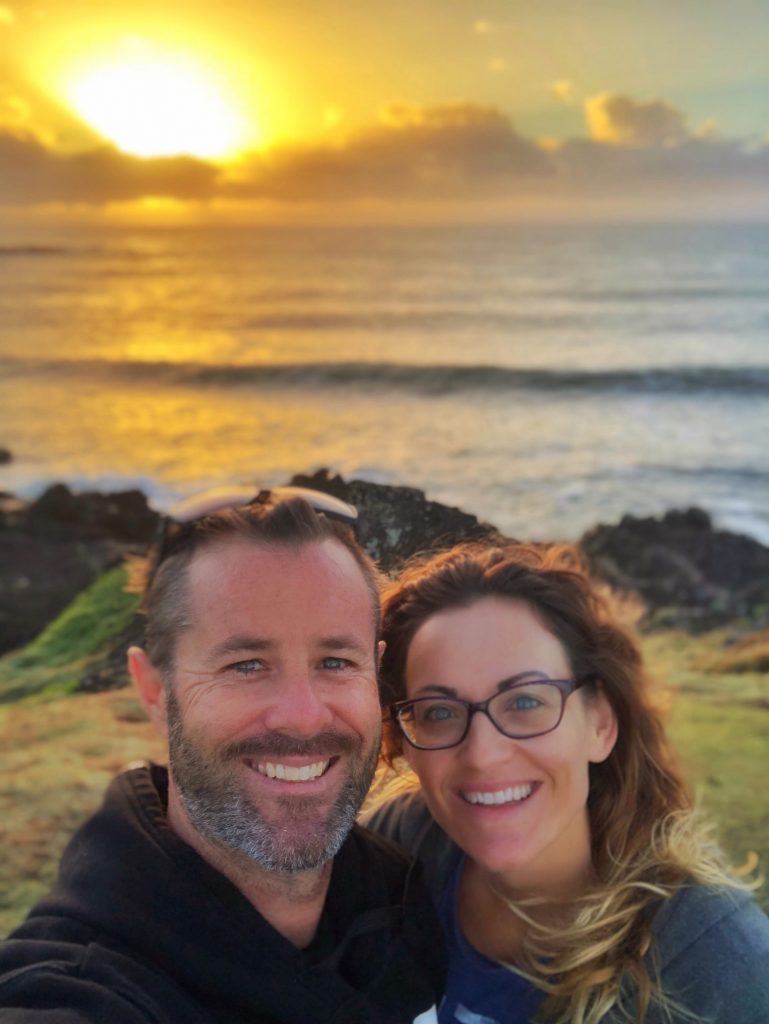 Straight out of bed and in front of the camera – lol.

So back up we went – along with half the town! It was simply spectacular. It felt like an entirely different place to where watched the moon rise just hours earlier. 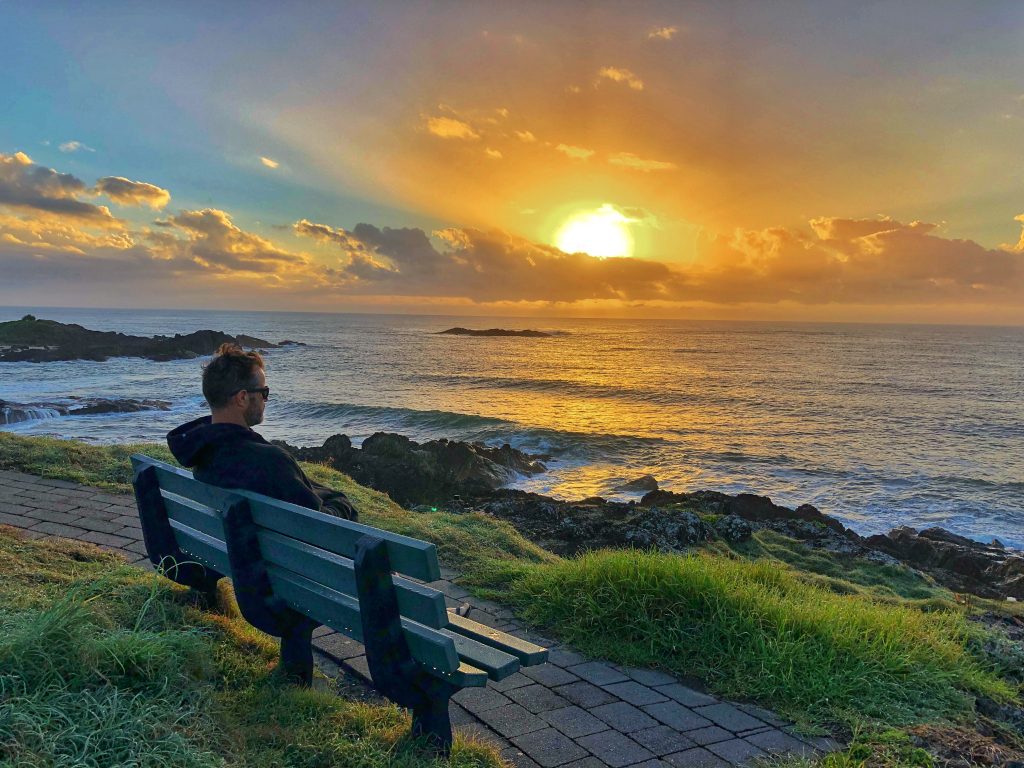 One of the most spectacular sunrises we have seen

After breaky we headed off on our first day trip adventure. Waterfall Way was where we were headed, taking us down some lovely windy roads, through lush green countryside and into some quaint little towns.

Our first stop was the bizarre Butter Factory which I am still trying to understand! There was a kids fairy shop, a leather making place with bags and belts, a wood working shop, clothes for sale, a place that did healing, ‘earthing’ and massage … a lovely restaurant was right next to a rather large furniture and homewares store! All these shops are in the building of the old butter factory which was surround by gardens dotted with relics form the past, and mosaic tiles in the courtyard. 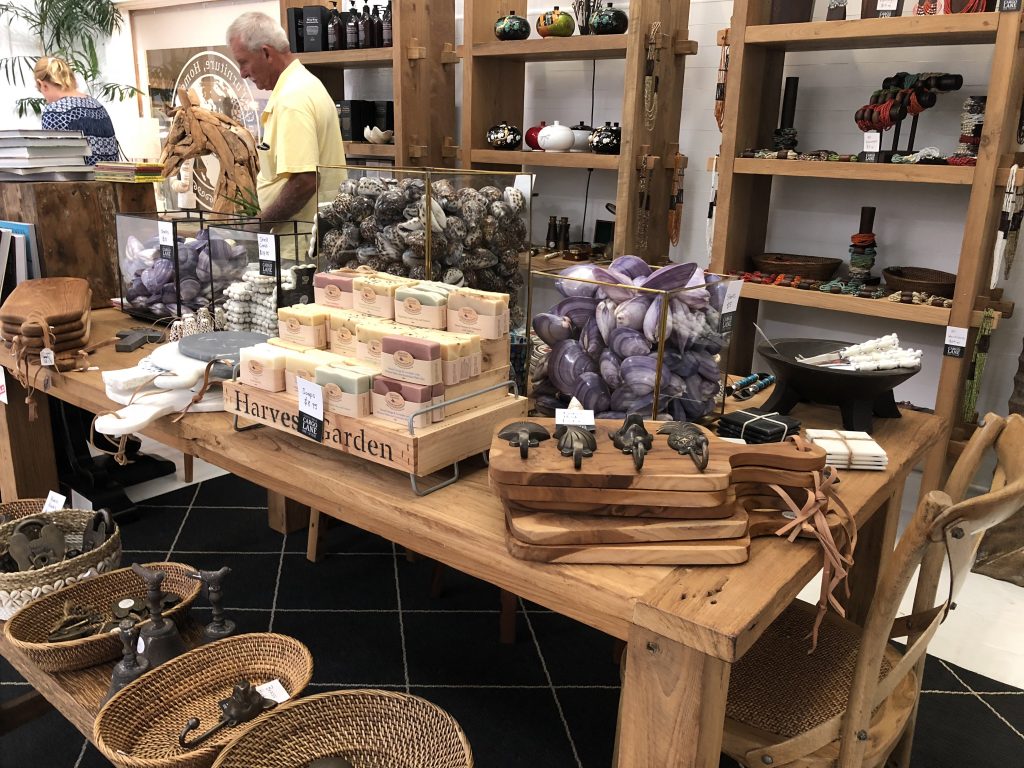 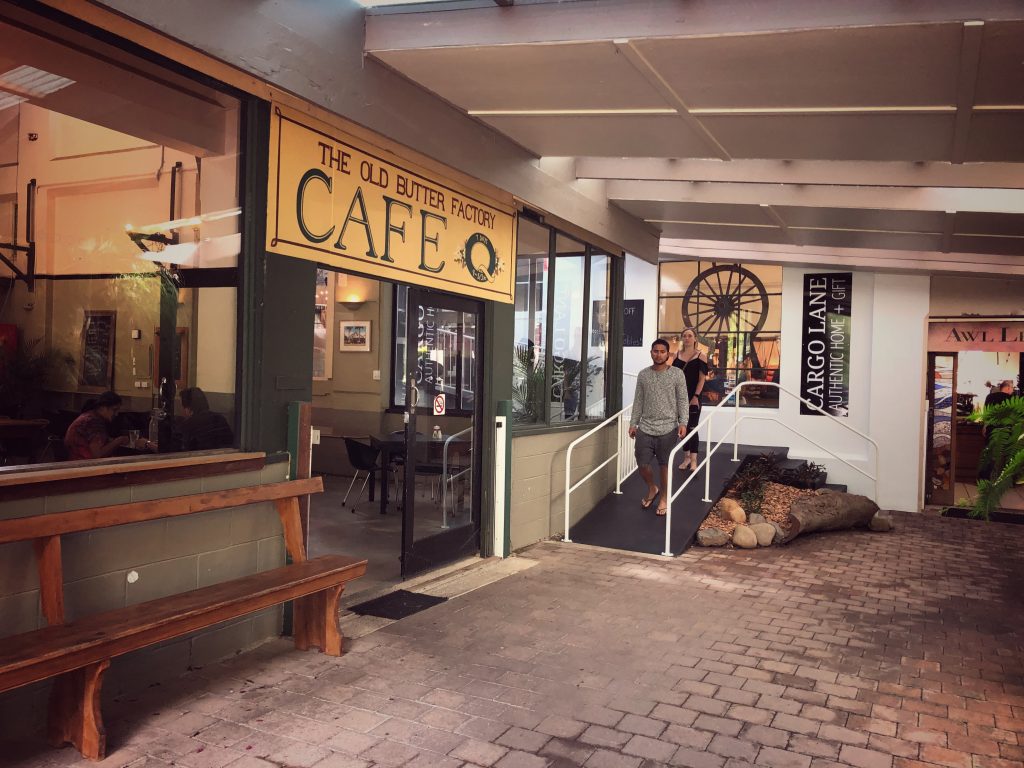 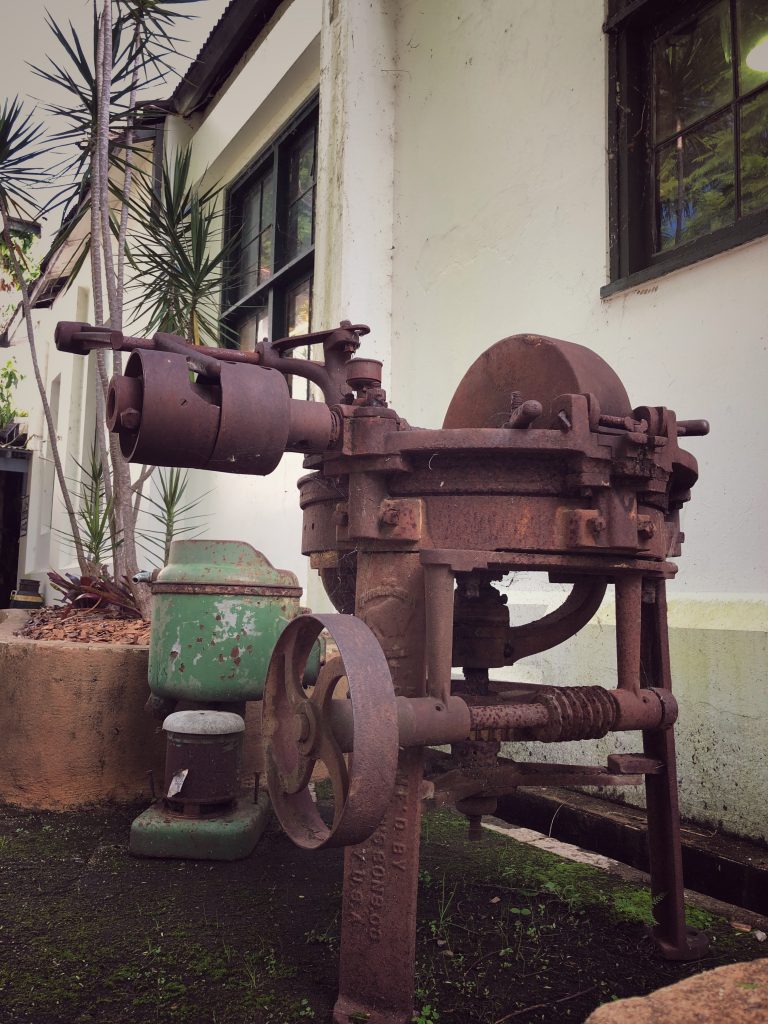 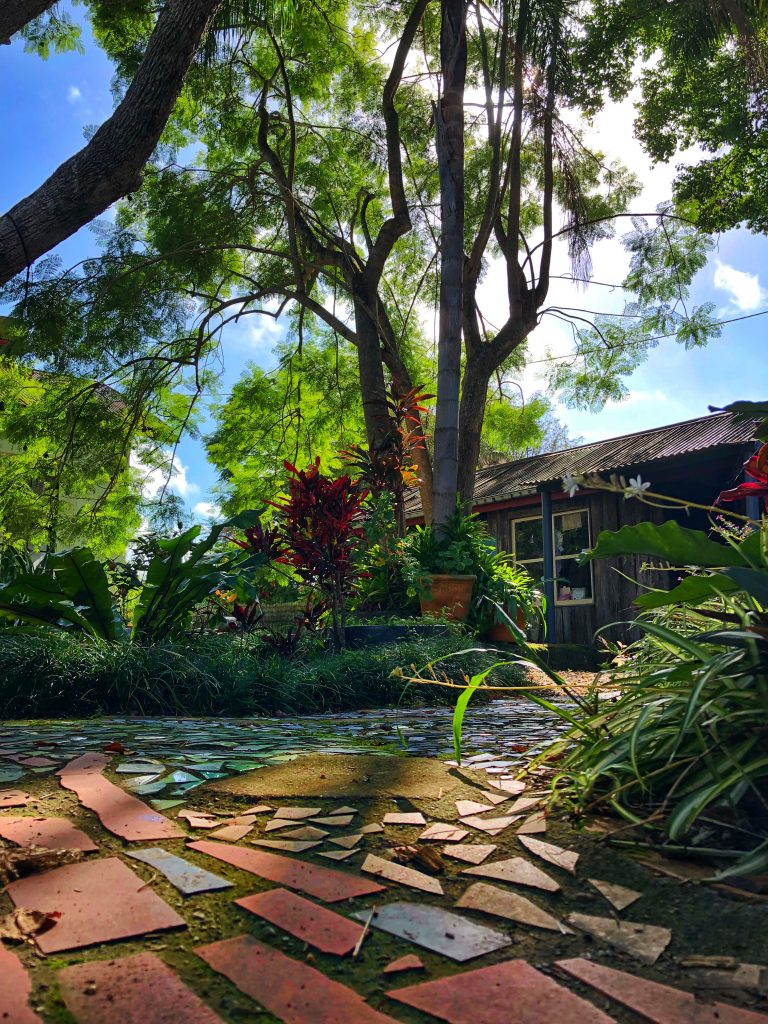 We stopped in to Fusspots, a quirky little teashop cafe for some of their famous Devonshire Tea. The walls and shelves are lined with so many different types of teapots – and there was even a large shelf full of silver spoons for sale.  The scones were huge and oh so very fluffy. We couldn’t finish them! In hindsight, one to share would have been plenty 😉 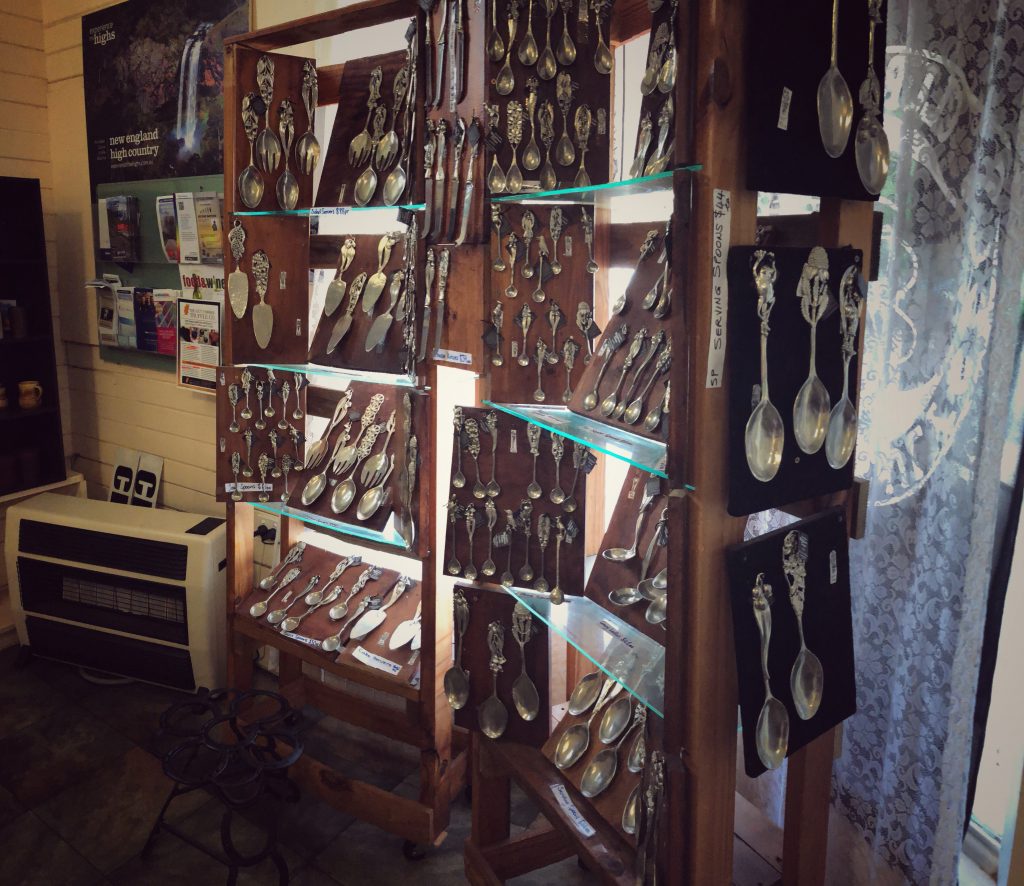 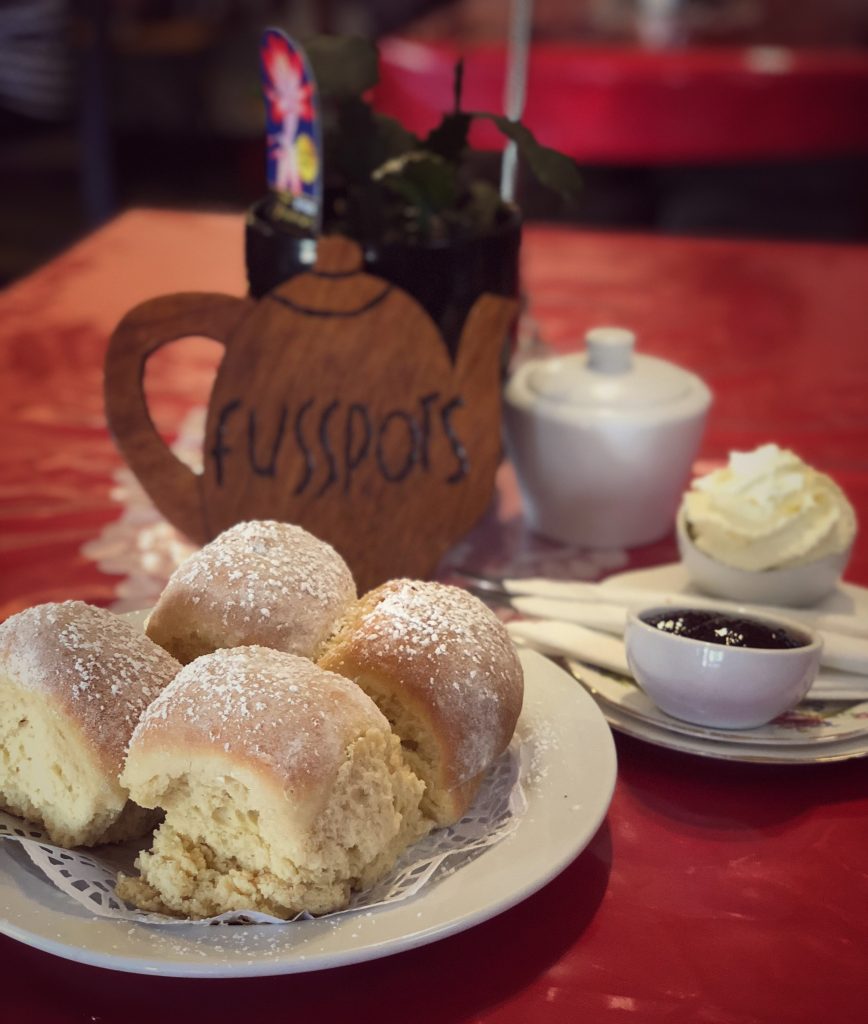 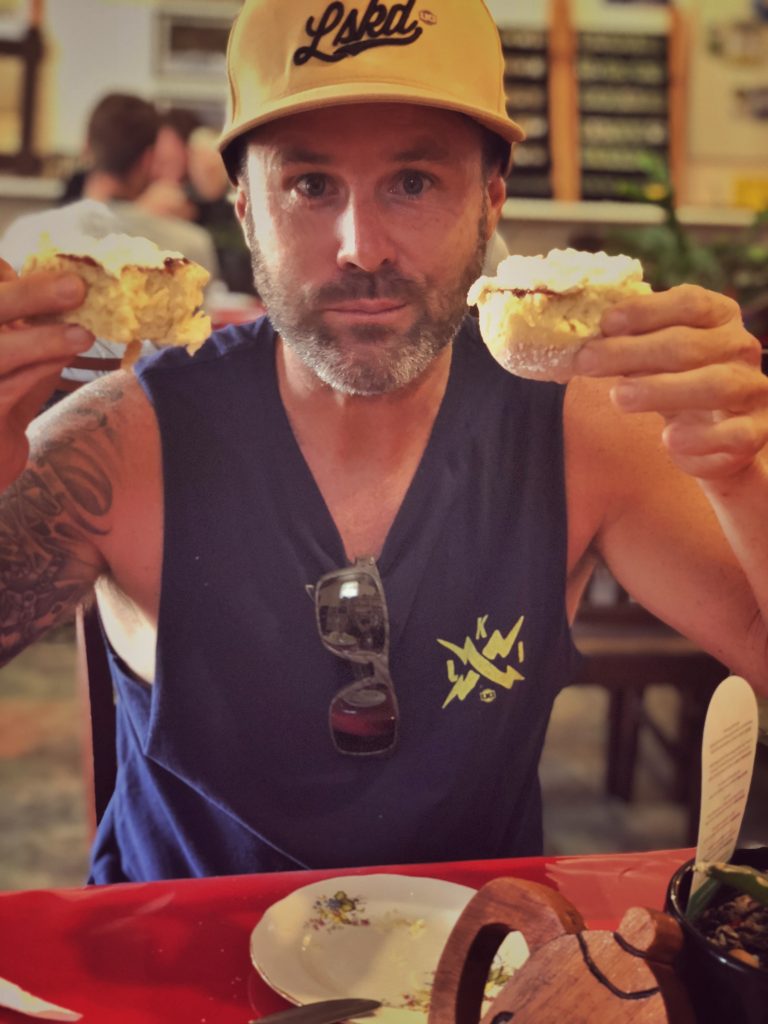 Barely 5 minutes down the road from Fusspots is Ebor Falls which lies within the Guy Fawkes National Park. It is one of the few sensational waterfalls we’ve come across that is less than a minute’s walk from the car park.

It’s a great stop-off between the coast and Armidale – somewhere where you can stop, take a break and watch the Guy Fawkes River plunging 100m over two waterfalls at Ebor Falls.

Ebor Falls offers spectacular waterfall views, scenic lookouts and a picnic area. We also saw some beautiful birds including one curious black cockatoo who was trying to figure or what our drone was ? 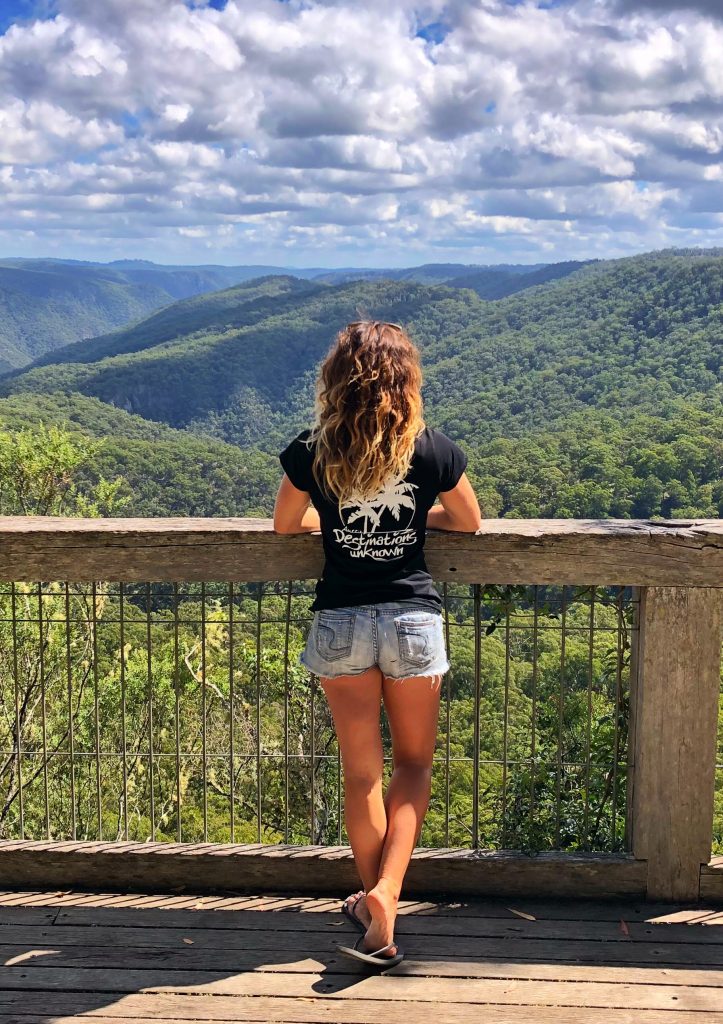 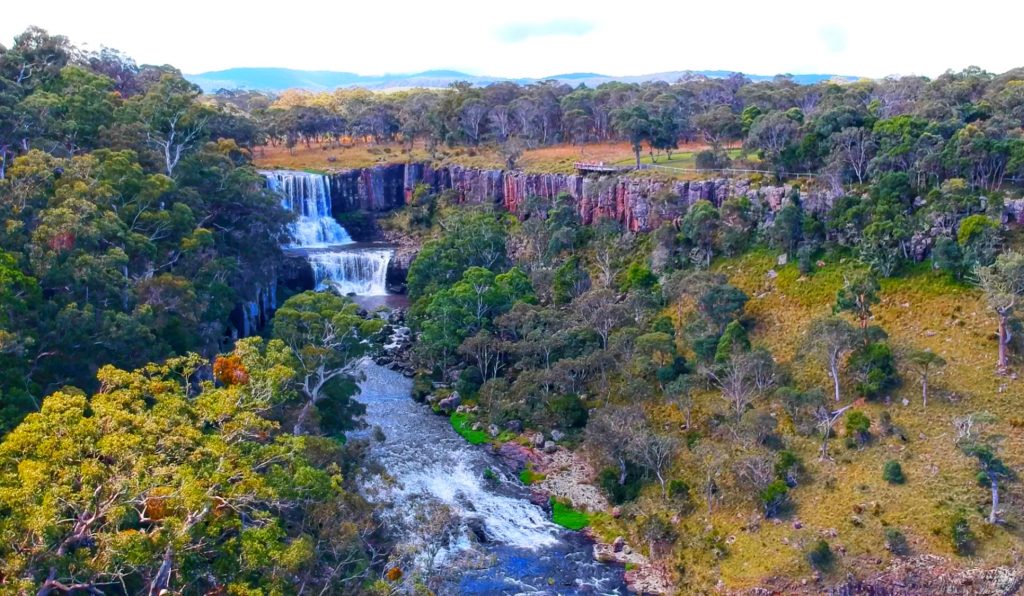 We noticed the temperature had dropped considerably while we were out of the car, so we were prepared for the cold, gusty wind that greeted us as we opened the doors at our next location – Point Lookout in The New England National Park. 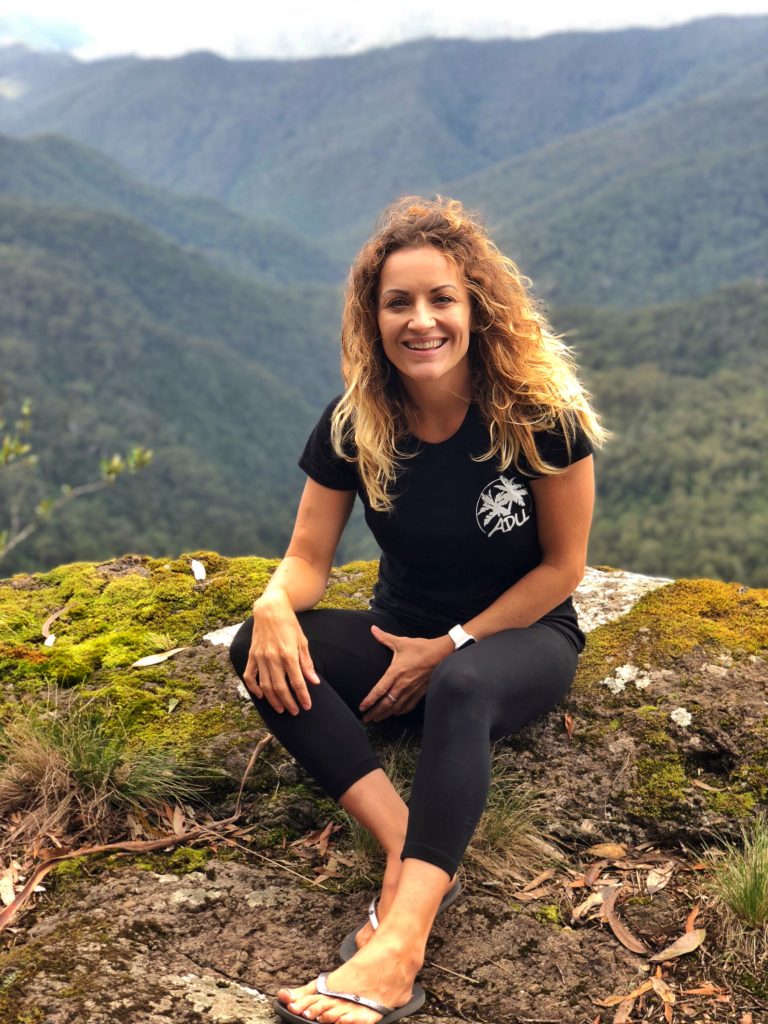 We thought the view would be obscured by the low-lying clouds that we could see as we approached the cliffs edge, but as we sat and watched, no sooner had the clouds appeared than they were swept up and away.

Mesmerised by the clouds dancing around in front and below us, we spent quite some time here just sitting and taking it all in. I must admit, I caught my breath a few times as I sat on the ledge, my feet right hanging off the edge. This is one jaw dropping place to let your legs dangle! 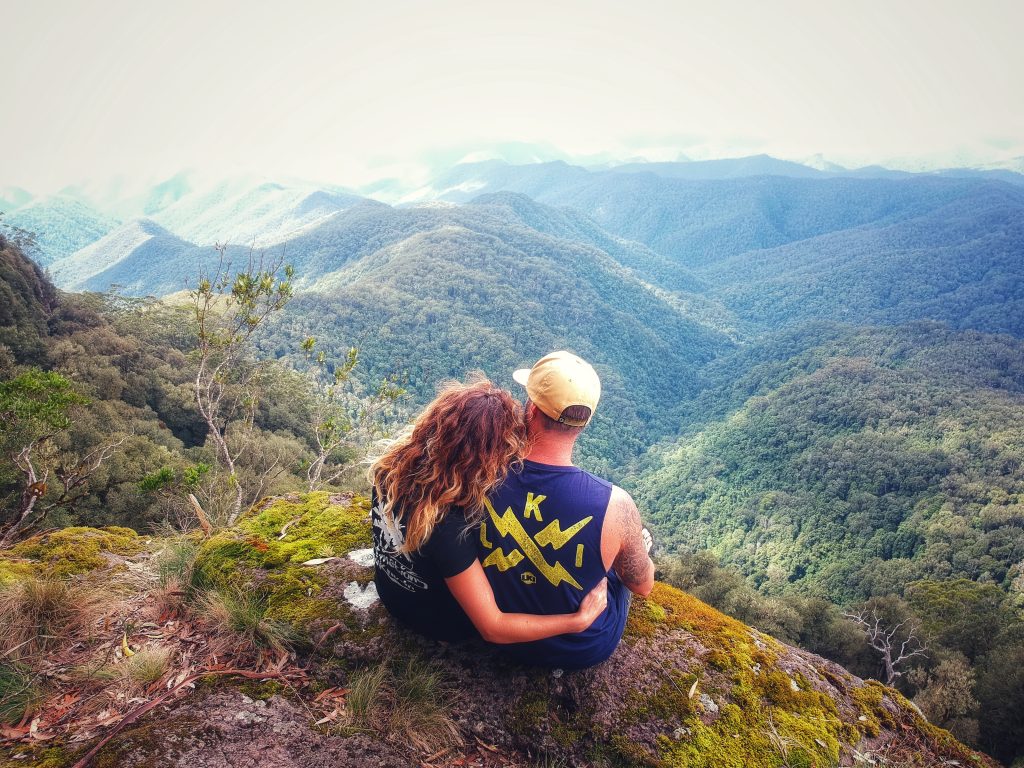 I was holding on tight! 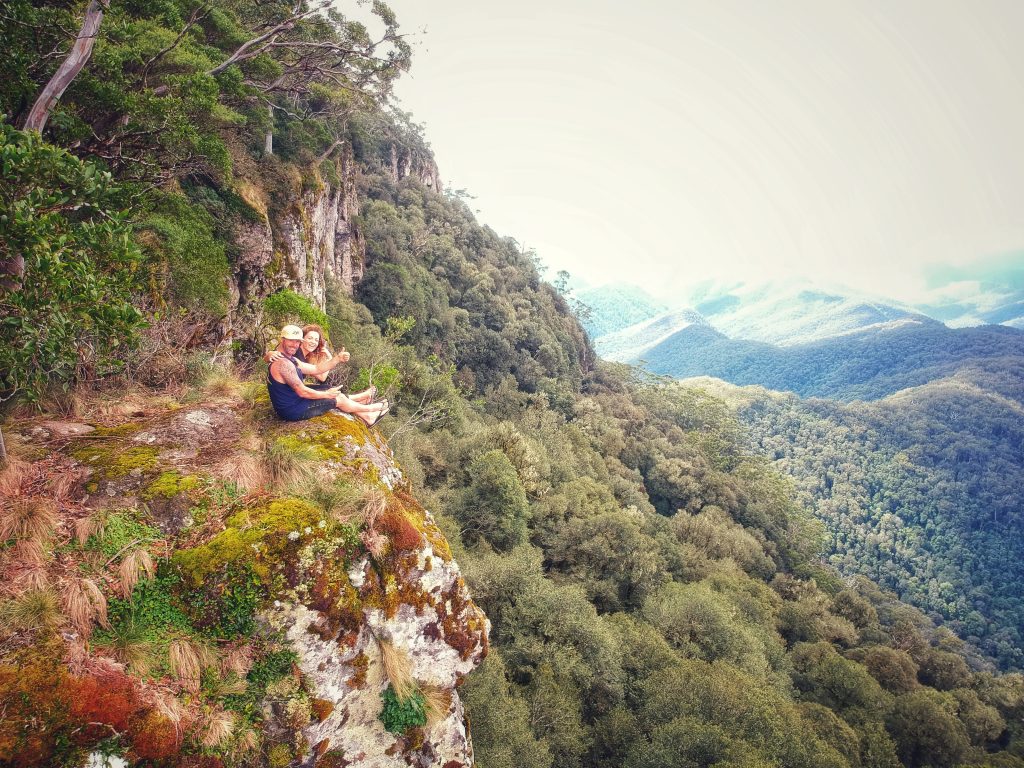 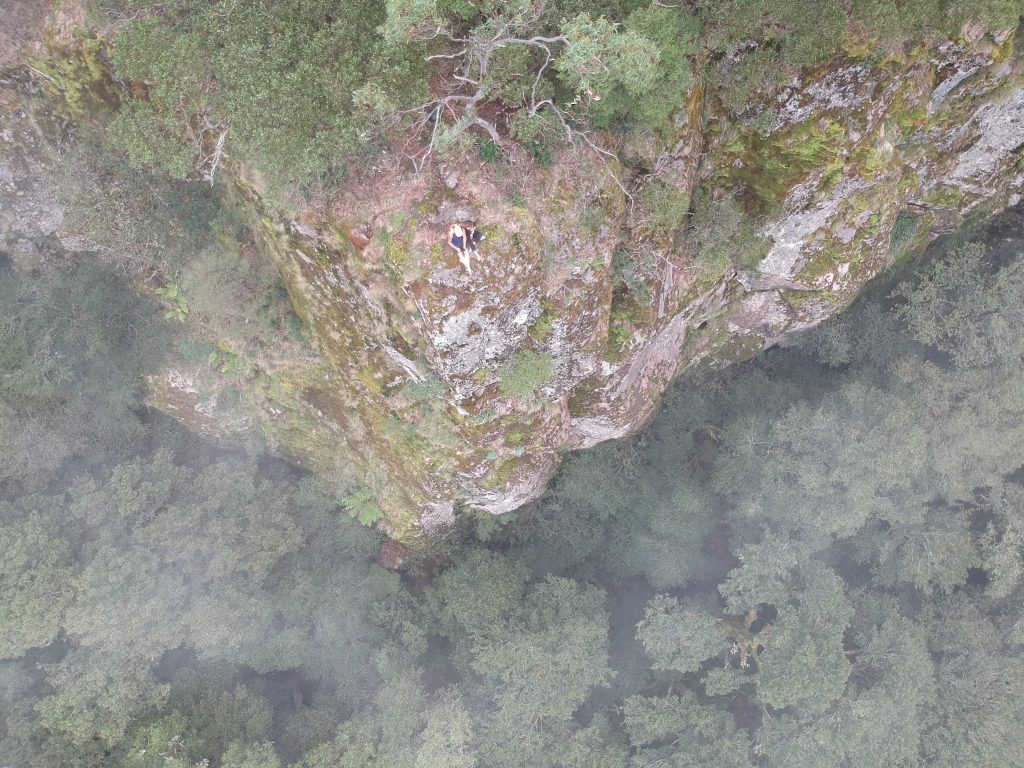 After the sheer amazement of seeing what we did at Point Lookout, Dangar Falls had high expectations to live up to. And, I could see the potential, but for me it was pretty disappointing. Chris has also been here before and seen it in all its glory, but unluckily for me – there was nothing more than a trickle making its way slowly down the cliffs edge to the tiny speck of water at the bottom.

The paths and viewing platforms are great, and the views are pretty – but I think the water needs to be flowing to appreciate the Dangar Falls properly.  Never the less, we sent the drone up, and it was speccy from above. 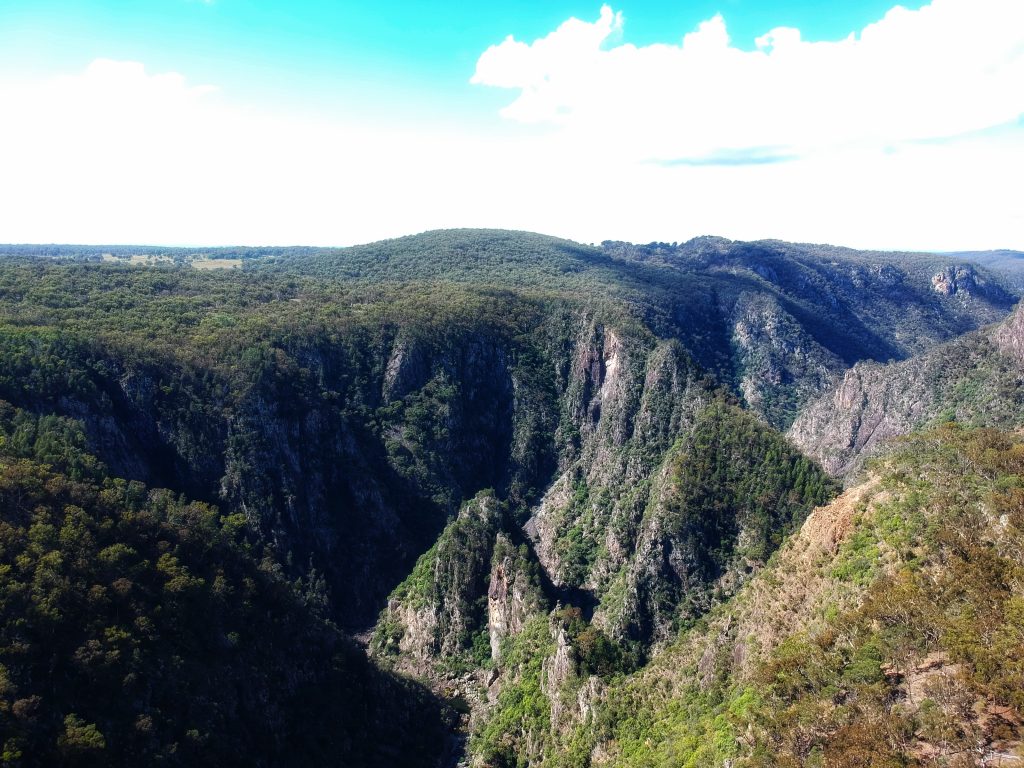 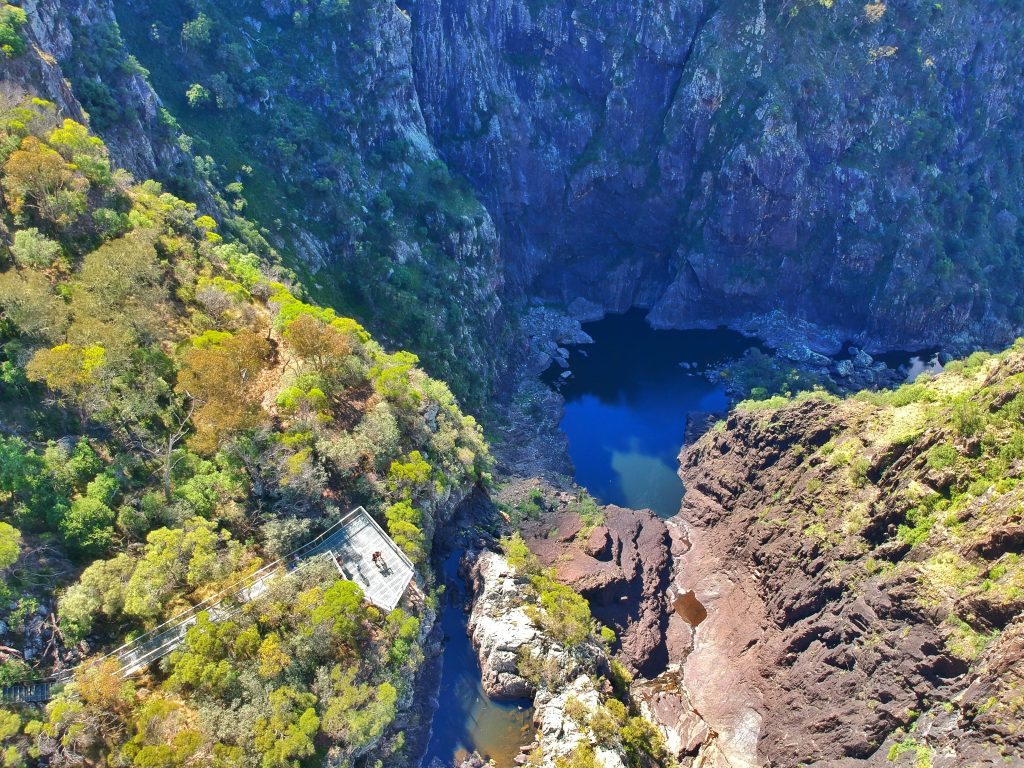 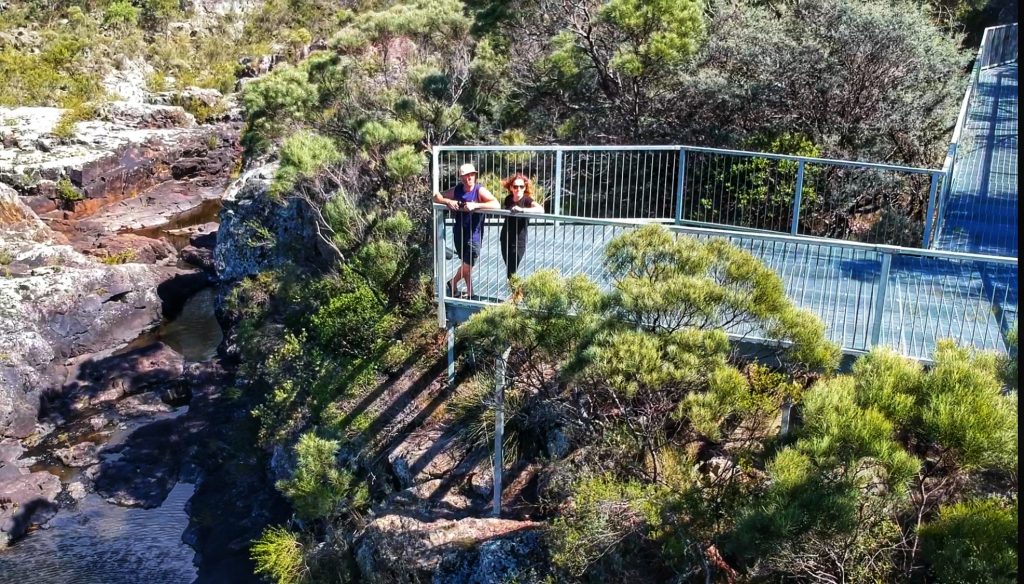 I had to go to the loo, so I followed the signs – that led me up a path to a camp kitchen (which looked lovely by the way) but no loo! So I snapped a few pics of the dry falls from a different angle, then ran back to the car park to try and figure out where the toilets were. I found them – drop toilets, located over the other side of the car park!

By this time, it was getting late in the day, so we headed back down Waterfall Way. It was no less sensational heading the other direction! We actually got a better view of the falls coming back down the snaky roads as we were able to look across the road and up, rather than twisting our heads to peer up as we drove past on the other side. Quite a few people had pulled over to take some pics, so we had to slow down which was fine for us!

We made it back to the van in good time, had dinner and settled in to get another good nights sleep before our next big day trip. Port MacQuarie, Crescent Head, Hat Head, Southwest Rocks were all at the top of our list as we made our way up the stunning NSW Coast. Read all about that adventure here.