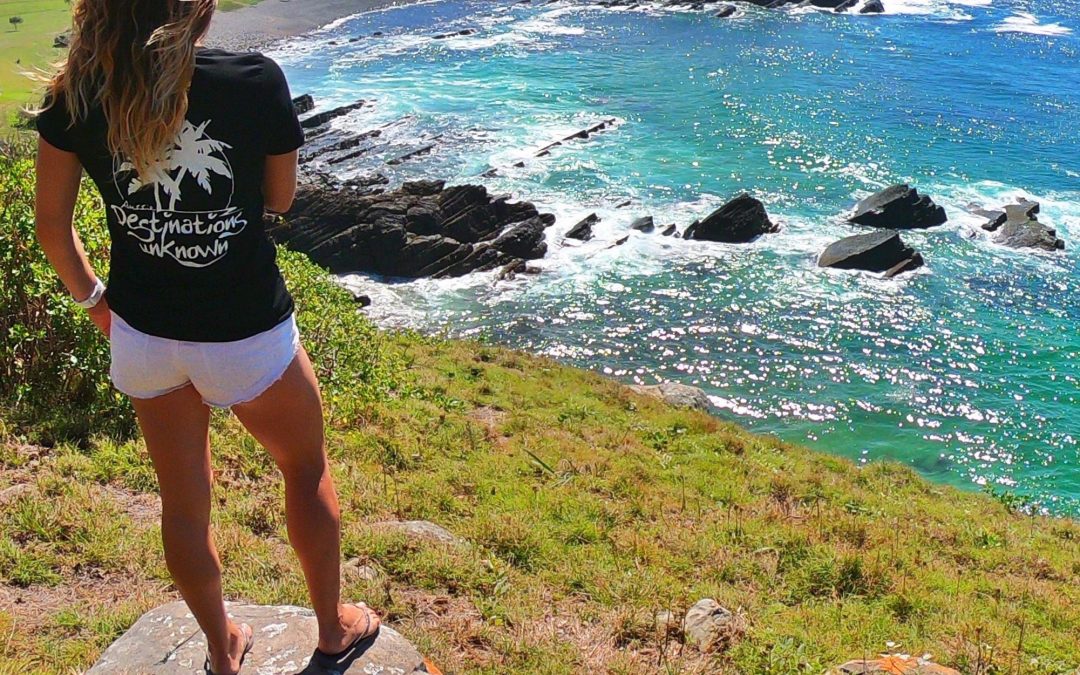 This adventure begins on day 4 of our Easter holiday in Central NSW. We arrived at sunset on Day 1, and Day 2 was spent exploring the lovely town of Sawtell and its sensational beaches and coastline. All this natural beauty was just minutes from the BIG4 Sawtell Beach Holiday Park we were calling home for 5 tremendous days.

We hung out with our friends out the front of the park and spent some time relaxing, reading and snoozing. The resting was essential as we were about to squeeze a whole lot of adventuring into the next couple of days.

On day 3 we started at the Butter Factory and worked our way along the gorgeous Waterfall Way, stopping to admire Ebor Falls, Dangar Falls, Point Lookout and a few other places in between. Simply stunning! Read about that adventure here.

This brings us to day 4; waking up at sunrise to start the hour and a half drive down to the delightful seaside town of Port MacQuarie.

Chris has been many times before, but it was a first for me and as soon as we parked and hopped out to admire the views, I started to wonder why on earth I hadn’t been here before!  I’d heard it was lovely, and it truly is.

The trees and the coastline give this bustling little town a lovely, relaxed and welcoming feel. We didn’t spend long, but what I saw was enough to convince me that we need to book into one of the caravan parks we and spend a week or so here. I can’t wait for the kids to see this place!

We stopped at Mrs.Yorks Garden to have a look down on the ocean from above, before heading over to Town Beach Park to snap a few more pics.

Along the southern breakwall of the Hastings River there are some fascinating painted rocks. This one pictured was my favourite, but the Cat in The Hat came in a close second!

These bright, colourful rocks are sure to catch your eye if you’re seeing them for the first time and I wanted to know why they were there, so I did a little research.

Apparently it all began as an art competition back in 1995 but is now a bit like an outdoor gallery that anyone can add to!

A walk along the breakwall is the easiest way to see the joyful wall of colour. The painted rocks begins at Port Macquarie’s Town Green, extends along the river, around the point, and a little way along the back of Town Beach.

The car park up this end is a good place to start if you want to explore the wall. There’s plenty of grass and some lovely shady trees, a playground and a skate park. There’s also a caravan park right there …! I can’t wait to go back with the kids as there really is something to keep everyone happy.

From there we started winding our way back up the coast, starting with Crescent Head.

We parked by the golf course and followed a tiny path through some trees and up onto the hill. What we saw we when turned to look down at the ocean below took our breath away and was enough for me to take so many phots that I am still having extreme difficulty sorting through. This would have to be the most impressive and breathtaking ocean view I have seen yet – and I’ve been to some pretty amazing places!

I could have sat and watched the water circling around and crashing onto the rocks for hours, but we didn’t have hours, so onto the next spot we had marked on the map. Southwest Rocks.

As the name suggests, Southwest Rocks has some pretty large rocks jutting out of the sand that you can see along the coastline from the next beach over, separating the beach into two.

There was a lovely caravan park right by the water, and the streets were lined with giant ball like palm trees and tall, pointy pine trees. The main road of the town led straight down to the palm trees and water front and some lovely beaches.

We drove past the Hat Head Bowling and Recreation Park and into Hat Head Beach Reserve. There was a lovely caravan park that was set in the bush, right by a little inlet complete with a busy little boat ramp. There were plenty of people on their inflatables floating down the little stream and out to the beach. I really wanted to jump in! This looked to be the pick of the camping spots for our next family trip away.

Also under the Southwest Rocks banner came the Trial Bay Gaol, a curious place that I’ve wanted to explore for years. I’ve heard ghost stories that have put me off wanting to camp around the gaol itself, but adventuring was never out of the question!

As we drove through the grounds, we could see some people had camped right up hard against the gaol walls. Eeek! It gave me shudders just thinking about nightfall. People seemed to be camped wherever they felt like it; right beside the gaol, in the camp grounds, along the road and on the water’s edge.

The story behind the gaol was intriguing as I found out as I wandered through and read the signs that were dotted around. A couple of large signs warned campers to ‘please do not feed the wildlife’ and it was quite obvious to see why. There was some almighty large kangaroos (that at first looked like statues) that seemed quite at home by the front gates!

Never content to stick to the standard roads, we carefully edged our very lifted Hilux down a tiny dirt road that was covered with overhanging trees. I’m pretty sure we collected a branch or two with the rooftops!

It wasn’t long before the green trees parted in front of us, giving way to a brilliant blue sky and sparkling ocean. When we couldn’t go any further, we pulled up and got out. To the right of us was a tiny beach and huge rock break wall that we could hear the waves thundering up against, and to the left was a calm little beach, dotted with holiday makers.

This was another place I reeeeally wanted to spend more time; just a few hours sunbaking and laying on my floating bed, soaking up the autumn sunshine. But alas, the lighthouse was calling our name! So, we reversed out of paradise, headed out of Arakoon and towards Hat Head National Park.

One would expect spectacular views from a lighthouse, and this one did not disappoint. Standing high on a narrow headland, Smoky Cape Lighthouse is surrounded by the stunning coastal scenery of Hat Head National Park. However, the best views were from our drone.

Chris sent the drone up and I made the ‘long trek’ to the top. I think Chris got the better deal (although I got to close the rings on my Apple Watch! ???)

The lighthouse itself is as beautiful as the views – with its winding staircase and octagonal tower. And while the views from the top were lovely, you could get equally stunning views from further down the path, and in my opinion, the viewing platform doesn’t go out far enough to see around the trees and bush in front. Of course, factoring Easter Sunday into the equation, there wasn’t much room to move with everyone trying to get ‘that shot’.

Thankfully I knew Chris would get the best pics with the drone and boy did he deliver!

As we drove back to the caravan park, I began the long process of transferring the photos and videos from the drone and GoPro across, trying to pick the ‘stand out’s’ as I went. Who was I kidding? Almost every photo from the day taken on the GoPro, the drone or either of our iPhone X’s was spectacular!

It was a whirlwind day, scoping out the dazzling NSW coast for future caravanning adventures.

We arrived back to an almost empty caravan park, with most holiday makers having headed back home, ready to start back at work the following day. We took an extra day off which allowed us some down time, and a much less hectic drive home.

With enough time left in the afternoon, Chris took me on a quick tour through Coffs Harbour. I found it to be quite a bizarre place – rather industrial, with an almost ‘unfinished’ feel about it. A bit like it was going to be an amazing holiday destination, and then attention was diverted elsewhere, and Coffs was left to fend for itself.

We went to Park Beach, McCauleys and the Breakwater … all unique locations and quite photographic as the sun was casting its last glowing light of the day across the water.

I’m not sure I would like to go back to Coffs anytime soon, but maybe there is something about the place that only the locals know about. Who knows? I did read about what appeared to be a lovely walk – the ‘Solitary Islands Coastal Walk’. That might have been nice if we’d had more time.

Maybe one day I’ll find out if there are any hidden secrets that Coffs is holding back on. Until then, I’m happy with my hour or so spent having a quick look around.

Our last night in Sawtell was relaxing, and our morning was a lazy tidy up. There wasn’t much traffic heading home, so we took a few breaks along the way, stopping in at Little Italy for lunch. I had a bit of a wander through the gift shop and museum before we headed home to Brisbane.

It was a lovely end to a fabulous Easter holiday and we now have some great NSW locations earmarked for some of our upcoming family adventures.

Our next group adventure has already been decided and was locked in on night 2 at Sawtell! We’ve all booked in for a few nights at Kingscliffe to celebrate Chris’s birthday in May. Well, it’s our ‘next, next’ adventure, as Cotton Tree is already booked for late April!

Aah .. the caravanning life. From one adventure to the next 🙂